Rhoslyn Bridge and Cutting are at the point on the Ffestiniog Railway where the line crosses over itself in the UK's only railway spiral. The spiral allows the line to gain sufficient height to by-pass Llyn Ystradau. The new line crosses the old at a pre-existing narrow cutting just south of Dduallt station. It was necessary to cut back the cutting walls to allow for the supporting columns of the bridge.

The cutting here was an existing feature of the old line.

During the planning of the deviation, this point was designated Deviation Site 4 for the preparation of the foundations of the bridge. Click here for more pictures of that time and the evolution of the bridge design.

The eight columns, with cross-beams between each pair to form the four piers, were cast in situ in early January 1969 by a team from Westminster School under the direction of John Grimshaw and Bunny Lewis with John Harrison as loco driver and winchman. Ready-mixed concrete was delivered to Tan-y-bwlch and railed up to the site in skips, to be poured into the shuttering.

Temporary spans were installed in autumn 1969, enabling material from Barn cutting to be carried over to complete Cei a'r Bont.

The temporary spans were removed in October 1970, and replaced by Dow-Mac prestressed concrete beams in January 1971. In March the deck was concreted using ready-mix delivered to Tan-y-bwlch and taken to site in Hudson wagons lined with polythene sheeting. Waterproofing of the deck and fitting of railings followed later. 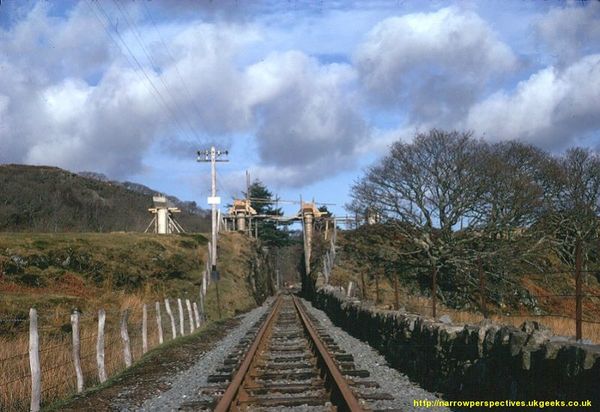