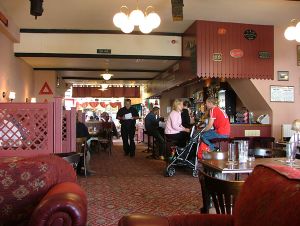 Internal view looking towards the cafe

Spooner's is the current name for the Ffestiniog and Welsh Highland Railways' café and bar at Harbour Station. It is named after the Spooner family who were closely associated with the engineering (both civil and mechanical) and management of the Festiniog Railway during the 19th century.

Spooner's is open throughout the year, including when the railways are closed.

The café is situated in the newer part of the station building whilst the bar is situated in the old goods shed and has grown to take over all of the available space, displacing most of the museum previously sited there. Princess was on display until 2013, replaced by King of the Scarlets for a few months during 2013, before the space was used for more tables. Now Topsy is the largest item on display in the bar, along with a number of other artefacts on the walls, but the remainder of the museum collection is currently in store. The bar won the "Pub of the Year" award for 2005 from the local branch of CAMRA. Recent renovation work has seen the café and bar become more integrated as a single space.

The views shown in these images has dramatically changed with the rebuilding of Harbour Station to accommodate the Welsh Highland Railway over the winter of 2013-4. The rebuilding work included the creation of a segregated outdoor seating area in the space between the two platforms of the stations revised layout.