Carriage 103 is an all third saloon carriage in the Super Barn series.

This carriage is the first of a new series of carriages built to a bigger loading gauge than previous vehicles. It is wider than other FR carriages and so the doors are inset so as not to foul the loading gauge. It is also longer and slightly taller than previous Barn carriages. Essentially the increased size is as a result of the work Steve Coulson did when he designed and built car 122. The access at one end is widened by adding a small extra door to facilitate disabled access. It was funded by the Ffestiniog Railway Society except for, as a strange quirk, the FR Trust funded one bogie. The same is true for car 121.

This is an all 3rd saloon with more passenger room inside. In particular, the seat spacing is being increased from previous FR carriages to give more leg room. The length and width are greater than any previous FR passenger vehicle and therefore the doors are inset in relation to the rest of the body. One end has double doors and a seat which can be collapsed to allow a wheelchair access to a table. 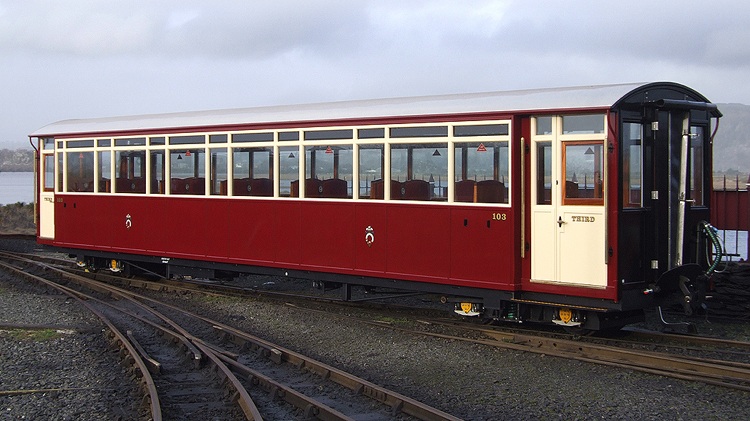 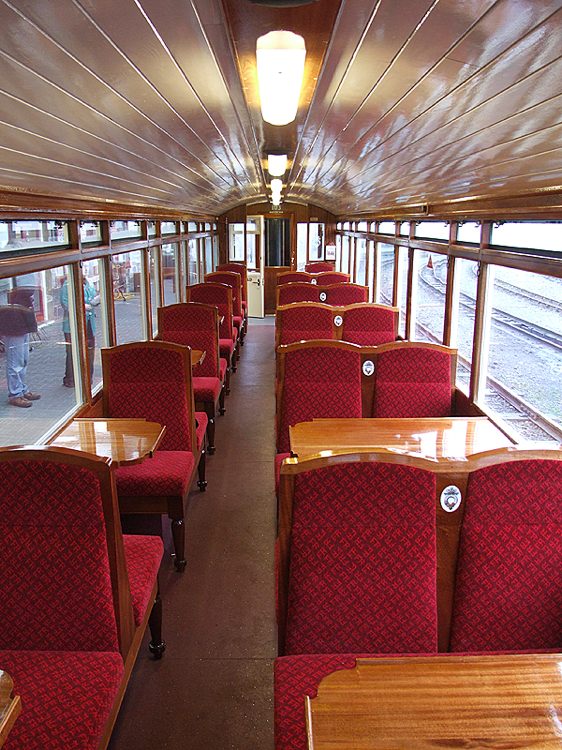 Interior towards Blaenau end and the expanded vestibule

The doors are inset, a first for an FR carriage. The Blaenau end vestibule has double doors to facilitate pushchairs/wheelchairs.

The carriage was completed in November 2009 after a test run to Blaenau. Its first use was a couple of days later on a special train from Minffordd to Porthmadog and return along with Van 4 on a special train for FRS Directors, as the rebuild was a society funded project. Carriage 103 entered service by February half term 2010. Intriguingly the carriage has been coupled between 100 and 124, which have been until now semi-permanently coupled to run as a pair.

After successful trials with Carriage 121, 103 entered the Carriage Works for a couple of days in June 2012 for modification to the design of its windows. 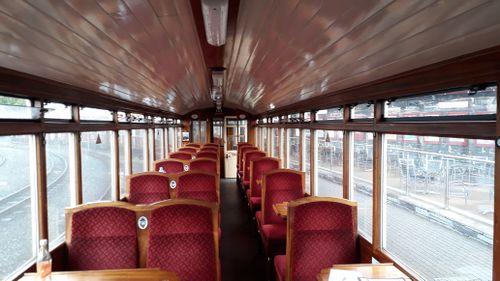 Interior, looking towards Porthmadog, in 2019. Looking tired and in need of a refurbishment.

Over the winter 2019-20, as part of a new plan that sees carriages refurbished after 10 years of use, Carriage 103 entered the carriage works for refurbishment. All of the windows had to be removed and the sealant replaced with the latest ARBO sealant, due to the old sealant letting go of the windows. The carriage received a full repaint (inside and out) whilst the seats and tables were removed, cleaned and re-varnished. The seating upholstery was also replaced due to the damage caused by the leaking windows. The ceiling was also cleaned, treated with knot sealant and repainted. The existing lighting was removed, and converted to allow LED to be fitted, and this brings 103 in line with the lighting on the most recent carriages. Interior walls and vestibules were deep cleaned, and several coats of varnish applied. 103 was found to be suffering from rot in the Porthmadog end vestibule floor, and this was dealt with. The carriage also received repairs to the guttering and a repaint. [1]