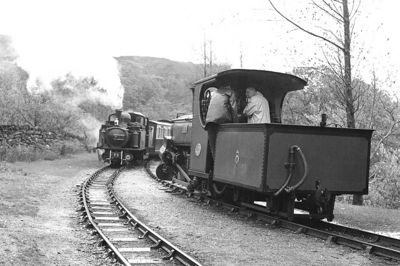 On Tuesday the 19th of May, 1964, the famous railway artist Terence Cuneo visited the Festiniog Railway to make sketches and take photographs for what was to become a well-known painting of trains passing at Tan y Bwlch. It was carefully staged with ex Penrhyn Quarry Railway Hunslet Linda waiting at the top points with an up train while double Fairlie Merddin Emrys arrives with a down train. As the line above Tan-y-Bwlch was still awaiting re-opening in 1964, this was seen as symbolic of the FR Co.'s resolve to continue with the re-opening of the line despite the C.E.G.B. reservoir blocking the line at Tanygrisiau. The artist (wearing the light-colored raincoat) can just be seen on Linda's footplate with the General Manager, Allan Garraway.

The resulting painting (titled: The Pass Track, oil on canvas) was used for advertising posters, timetable posters and sold for £1 to the general public. In the late sixties, it was a very well known face of the FR. The accompanying text on the "Invaluable" web site says that "the painting was acquired directly from the artist by the Ffestiniog and Welsh Highland Railways. This painting is thought to have been commissioned by the Company Chairman, Alan Pegler, a friend of Cuneo's and the driving force behind the restoration of the railway from 1954." The painting was sold by the railway by auction in 2008 at Sotheby's for £49,250.[1]

In 1985 Cuneo created another Festiniog picture at Pen Cob which featured Merddin Emrys, Mountaineer, the second Earl of Merioneth and a pony indicating the horse-drawn days entitled "Festiniog Workhorses". This was issued as limited edition prints.

His pictures were notorious for including a small mouse somewhere in the foreground.