From Festipedia, hosted by the FR Heritage Group
< User:Heritagejim
Jump to navigation Jump to search 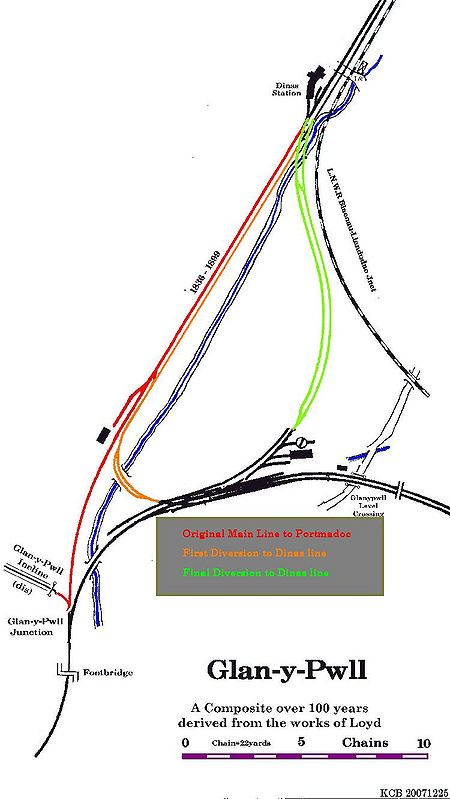 At the top end of the line, the railway was built to run to two quarry termini - Rhiwbryfdir and Duffws. Initially only the Rhiwbryfdir or Dinas line (the red line on the map) had track laid and it was somewhat later before the line went to Duffws (black line). About 1880 a loop line (the orange line) was added to enable trains to run direct between the two branches. In 1899 a deviation line (green lin) was built to enable the the Oakeley Quarry to extend its tip over the old line. The branch was not rebuilt after the line closed in 1946. 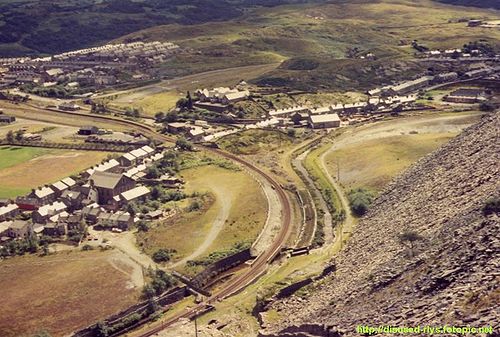 An overall view of the lower end of the 1899 Dinas Branch. Dinas Station site is at the bottom centre with Dinas Road leading to it over a level crossing on The Conway Valley line. The site of the former station can just about be seen as a low wall. Glanypwll is near the top. The missing bridge near the centre is the present limit of a headshunt which serves the carriage shed at Glanypwll
*Date:August 1993 *Photo: Patrick Marks

The Dinas and the Duffws branches (the latter was to become the "main line", though it was originally the other way round) originally separated at an area called called Dol-y-moch, which is by Barlwyd Bridge, immediately above what is now "Footbridge 4". Within a matter of yards the Dinas branch was joined by the line serving Nyth Y Gigfran Incline. The remains of this area are still viewable. It then headed north towards the quarry settlement of Rhiwbryfdir, following the course of Afon Barlwyd, and passing first Dinas station, which served the village.

The area where these two lines parted was called Dinas Junction at that time.

The branch looking towards Glan-y-Pwll from near Dinas Road LC during the removal of Glan-y-don slate tip.
*Date:21/3/76. *Photo: Jim Hewett

The Duffws "main line" curved round to the right, and ran on to Duffws quarry terminus, passing through the village of Glan-y-pwll towards the area known as Four Crosses, the centre of the growing town of Blaenau Ffestiniog.

In 1880 a short "link line" was built from just south of Glan-y-pwll, running north-west in a curve to join the Dinas Branch directly with the Duffws (main) line. This effectively created a triangle. The name "Dinas Junction" was then transferred to this new junction, the lower junction accordingly being called "Old Dinas Junction".

However, in 1899 the route of the lower Dinas Branch was altered, a new junction (called "Glan-y-pwll Junction") being built at Glan-y-pwll, immediately north of the former Dinas Junction. From here the line headed north-east to rejoin its former route.

Dinas Station was located on the Dinas Branch at the foot of then Oakeley Incline. This was the first station for Blaenau Ffestiniog. The station once boasted a substantial station building and goods shed and also a single road Locomotive Shed, which housed the Top Shunter. 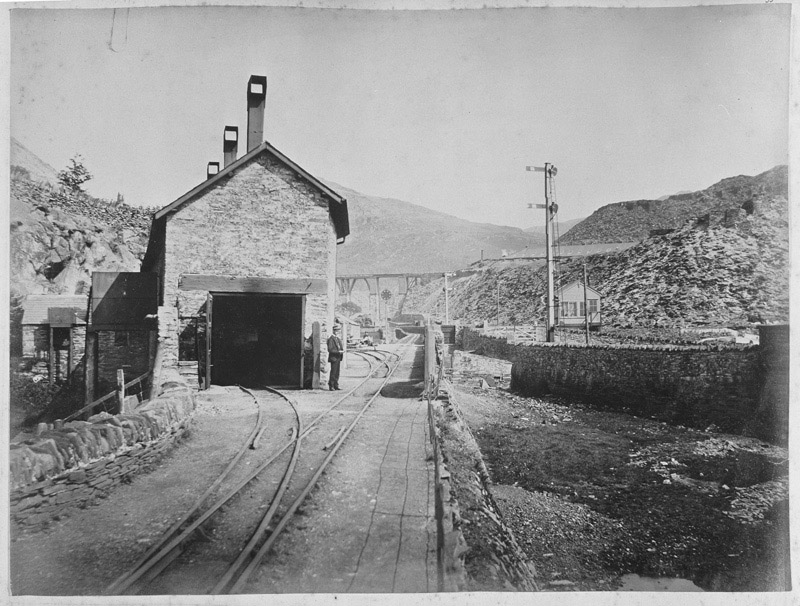 The differing routes are summarised in the drawing below. Covering over 100 years it cannot be accurate, but gives an indication of what happened

The branch continued on to the settlement of Rhiwbryfdir at the foot of the Llechwedd Incline.

A set of development maps have been provided for the area by Graham Isherwood. See them here