From Festipedia, hosted by the FR Heritage Group
(Redirected from Glan-y-Pwll)
Jump to navigation Jump to search

Glan y Pwll (English: Shore of the pool) is a genteel suburb of Blaenau Ffestiniog, where the 1899 deviation to Dinas and Rhiwbryfdir used to branch from the main route to Duffws.

There was a locomotive depot here from 1899. That site is now an engineering depot. Additionally the line of the old branch has been used to access a new carriage shed built as an expansion to the depot.

The loop line (orange on map) of the old Dinas Junction built in 1880 connected with the line to Duffws near Glan y Pwll.

The second junction here opened in 1899 and replaced the old Dinas Junction on the other side of the Barlwyd Bridge. The junction was moved because the new alignment of the branch (green on map) was further out from the quarries to avoid planned slate waste tipping by Oakeley Quarries which was to cover the old line (red on map). The loop line (orange on map) was not replaced.

An engine shed, complete with turntable, was sited here in the Y between the Dinas branch and the Duffws mainline. England engines were turned for the down journey here. This shed replaced the one that was part of Dinas Station. 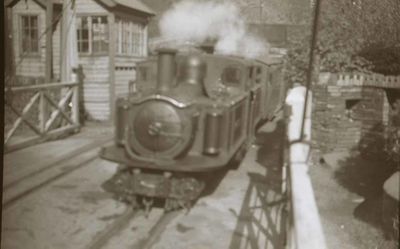 Signal Box and crossing with Livingston Thompson passing on a down train in the 1930s. Photo: Adrian Gray collection

The railway crossed the old road from Rhiwbryfdir to Tanygrisiau here at a fully gated level crossing. The formation was double track from here onward to Duffws and fully signalled with McKenzie & Holland semaphores. The two lines were operated as a passenger single line and mineral single line rather than the usual up and down lines.

There were staff instruments here for the single lines. Prior to 1899 they were in the crossing keepers house/barracks. After the opening of the junction in 1899 they moved to a new signal box on the clock side of the line between the level crossing and the old footbridge to the school. This location had views towards Stesion Fein and back down the line across the level crossing. This signal box had 19 levers with one spare. According to Boyd, this box closed in September 1924. There is a cryptic set of correspondence contained within XD97/19495 that indicates this signal box was still open in September 1925.

In preparation for the re-opening to Blaenau Ffestiniog, Glan y Pwll was used as a base for the rebuilding of the line north of Tanygrisiau. This started as early as August 1973 with clearing the Old Loco Shed, and securing the compound. Almost all the early work was done by volunteers from the London Area Group.

The old Crossing House "barracks" was used as a hostel for some time. The crossing house and engine shed are the only FR owned pre-1946 buildings in Blaenau.

Once the shed was made secure the loco Diana was shedded there and a start was made on putting the track into a good enough state for PW trains. This work was under the supervision of Ron Lester who was in charge of New Works PW. The fenced compound got the nickname "Fort Lester". One of the first investments in 1974 was building the electrical switch room in concrete blocks behind the old engine shed. The original track had been lifted and new rails and sleepers but no ballast had been laid from the Dolrhedyn Road Bridge gap to Barlwyd Bridge by 1975. In late 1975 Ron Lester left the FR's employment and the pace of use of Glan y Pwll depot slackened until 1978 while the emphasis was on completing the Deviation. During the period up to 1982 the depot was used as a base for the walling repairs, replacement footbridge construction and fencing etc. which was required to ready the line for reopening.

The shed was extended across the site of the old turntable (the pit is understood to be still there underneath) and fitted out as a workshop, and became the base of Andy Putnam's Civil Engineer's department. The preparatory work which resulted in the digging out of the old turntable pit was done in 1976.

In 1996-7, facilities were extended by the construction of a large carriage shed alongside the BR line. To provide access to it the 1899 Dinas branch was relaid as far as the first river bridge (which has been removed). The new shed was initially used for work on the Garratts for the WHR. 138, 140 and the boiler for 143 arrived during 1997 and at the Gala in April 138 was demonstrated in steam and 140 was on static display. Following trial running and driver-training on the branch 138 departed for the WHR later that year but parts of 140 remained until 2005. Another possible use for the new shed was to stable a train overnight to allow an early down departure, but so far that has not occurred. Otherwise the shed has been used for winter storage of carriages, and longer-term storage of items not in regular use, such as Mountaineer II.

Following Andy Putnam's death in 2009, the workshops were mothballed, apart from occasional use by S&T and a skip wagon repair gang. The new shed remains in use for storage.

The level crossing has been converted to automatic (AOCL) operation with warning lights for traffic. Only one track has been relaid to Blaenau Ffestiniog. However the formation is wide enough for two and the rails for the second line are in place over the level crossing, though disconnected, as part of the 1976 scheme to build a line to the tourist attractions at Llechwedd Quarry. Although not carried out at the time, the idea has not gone away.