Cae Pawb crossing is the operational name given to the point where the new WHR (and the original) crosses over the line of Network Rail. It was formerly known as the Cambrian Crossing[route 1] or after 1923 the Great Western Railway Crossing. However GWR documents refer to it as the Croesor Railway Crossing, or the Welsh Highland Railway Crossing.

Originally the Croesor Tramway was built here c.1864 and the Aberystwyth & Welsh Coast Railway (later Cambrian Railways) built up to it on both sides c.1867. At the time of relaying Cae Pawb Crossing, the old walls of the Croesor line were visible, crossing the Network Rail line and therefore preceding it. However by some legal chicanery in the 1920s, the Great Western secured control of the crossing and it was removed by them in late 1937 following the closure of the WHR. 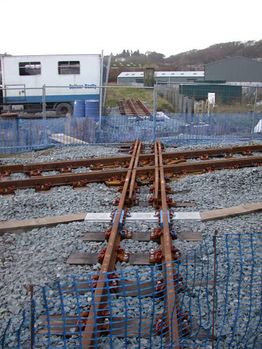 Network Rail have been extremely collaborative with our reconstruction; we owe them our thanks. The ERTMS installation at the joint crossing seems to have been the first piece of equipment of this type active in this country. The crossing itself is of very solid construction and is insulated electrically from the adjacent sections both of RhE and of Network Rail. The narrow gauge crossing is made of 113lb/yd (56kg/m) rail, connected to lengths of 80lb/yd and in turn to our standard 60lb/yd (30kg/m) rail. The standard gauge section through the crossing is of solid bars rather than rail.

The new crossing was installed in the Network Rail line in 1-2 November 2006 by their contractor Carillion. WHR track was connected to it in 2008 but the whole CTRL section was not complete and ready for opening until 2010.

The CTRL, or Cross Town Rail Link, replaces the Junction Railway, built in 1923, and which formerly linked the two railways through the town, though not along exactly the same route. Cae Pawb is the northern start of this link, the southern end being Harbour Station itself. The difference between the alignment of the two lines is that the original ran through what is now the Car Park and crossed the main road at the end of Madoc Street.

Feasibility studies took place in 2019 to assess whether automating Cae Pawb would be feasible, and this work is now planned for the "not-too-distant future"[1]

Note: This is taken from two unofficial postings, reworded here to give some ideas. Until regular use is made of the crossing, it is theoretical, and is only meant as a broad outline.

Obviously, there must be some control so that trains may cross safely. There is a manual system procedure, and an ERTMS automated proceedure, due for introduction.

Network Rail, as the main carrier has the predominate right of way on the crossing, and as such F&WHR trains must seek permission to cross each time, rather like on a pelican crossing in road traffic.

Basically, under a manual system, the F&WHR train must stop before the catch points and make contact with the Network Rail operations centre at Machynlleth, and request permission to cross.

A time window must exist that satisfies the NR control that the F&WHR train has enough time that it may cross without impeding the running on the main line. This may mean the line being clear between Minffordd and Porthmadog GW, dependent on the direction of the train. (i.e. if the train has left Porthmadog heading to Pwllheli, or left Minffordd heading to Harlech, then the line would be clear as far as that train was concerned).

NR, in giving permission, would then set their signals accordingly, and the F&WHR train would go through the process of crossing. This would include:-

With ERTMS, much is automated, and the time window may increase. With an on-site crossing keeper, the delay to the F&WHR train will be minimised. ERTMS came into use in October 2010 between Harlech and Pwllheli, the first section of railway in the UK to use this novel European system.