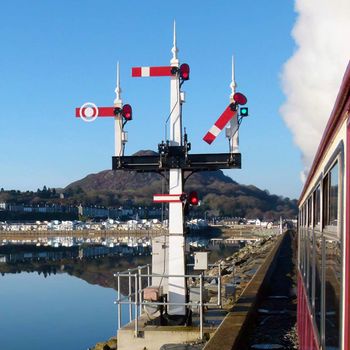 The new Trident Signal on the Cob is the centrepiece of the new signalling at Harbour Station.

Harbour Station, Porthmadog, required major works as part of the arrival of the Welsh Highland Railway into the town. Initially, this was a temporary connection of the WHR to the FR, installed in 2008 and commissioned in 2011. However, this layout was problematic to operate and a more permanent solution was needed. This led to the wholescale remodelling and resignalling of the station: this included the construction of a second platform and associated run-around loop along the Cob, and a signal box controlling a mixture of semaphore signals and colour light shunt signals.

This is the construction plan, as of 15 October 2007, shortly before work was due to start. This is identical to the version that appeared in FRM-195. Many subsequent changes have been made.

The original plans for the remodelled Harbour Station. Supplied by David High © 2007 WHRCL

The WHR line comes in at the top left of the picture and runs at a 45-degree slope to join the FR line at the bottom right. The platform is the shaded area, now covering what was 1 road (the full black line in the shaded area). The Cob Record store is the rectangular building at the top. The trackwork at the water tower end of all the Harbour roads is subject to change for operational requirements.

There are also some documents, copyright © WHRCL, which are available to view. It should be noted that these were the planned arrangements as of the date that appears on them.

With the WHR fast approaching Porthmadog, changes had to made to the layout of the station. 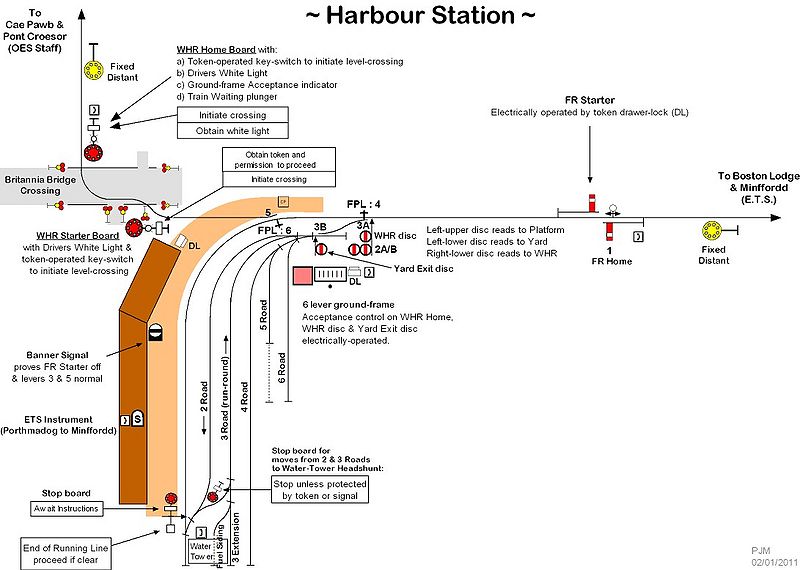 The initial WHR connection with the FR ran through the top-end of the existing FR platform, beyond the goods shed. The point giving access to the WHR was controlled from two spare levers on the existing ground-frame (one lever for the point and the other for its facing point lock). These two spare levers had originally controlled the point giving access to the goods shed siding. An additional signal had to be provided for moves to the WHR. As it was not practical to control this additional signal from the lever-frame, a solenoid-operated shunt signal was provided, controlled from push-buttons mounted above the lever-frame. This new shunt signal was mounted adjacent to the two existing mechanical shunt signals controlling moves to the platform and sidings. The opportunity was taken to provide a second solenoid-operated shunt signal for moves out of the sidings (the lack of such a signal had been a contributory factor to a number of derailments on the trap points over the years, and there was concern that the increased complexity of operations could lead to further such incidents).

A hut was provided adjacent to the lever-frame to give the signalman protection from the weather, nick-named the "Bobby Hut". This hut was subsequently relocated adjacent to the Mineral Line at Minffordd when Harbour Station was remodelled and the signalbox commissioned.

The 'temporary' connection made in 2008 was used for a limited number of trains each day during the 2011 season, once the cross-town link line opened for traffic. The popularity of these trains, together with the opening of the Porthmadog bypass in October 2011 meant that the 2012 season saw all WHR trains terminating at Harbour Station, even though this required a pilot loco to haul trains on and off the cob from the one platform. With only one platform, no FR movements could take place whilst the platform was occupied by a WHR train. It was often necessary to shunt an FR train out of the platform into the sidings in order to admit a WHR train, and then shunt the FR train back into the platform once the WHR train had departed. This operation was complicated and time-consuming. The signalman would often have three locos moving independently around the station (FR loco, WHR loco and pilot loco).

This, in turn, led to pressure to complete the changes proposed for the WHR's arrival.

The Cob was widened during the winters of 2011/12 and 2012/13. Further preparatory works were carried out during the 2013 season including erection of the signal box and the relay room. The winter of 2013/14 saw the major remodelling of the station completed ready for the start of the 2014 running season, with a new track layout, a new platform for Welsh Highland services and a comprehensive new signalling system.

The following is a brief summary of the works carried out. A detailed account and photographic record of the works can be found at Harbour Station Phase 1 works

October 2011 saw preparatory work begin, including removal of portions of the existing sea wall and provision of a haul road across the station.

March 2012 saw phase 1 of the works complete, and train services resumed for the summer.

Oct 2012 saw phase 2 of the works begin, with construction of the new wave wall.

Once the wave wall had been completed, work could start on building the new relay-room (Dec 2012-April 2013) and signal-box (Feb 2013-Aug 2013). Work on installing the signalling equipment in each of these buildings then began as soon as each building was ready. Priority was given to building the new relay-room, as construction of the equipment racking inside it could only start once the building was complete. The signalbox building was not such a high priority, as much of the work on the lever-frame was done off-site before the building was ready (see here for further details about the lever-frame).

Jan 2013 saw work begin on laying-in new cable ducts, and removing the old wave-wall. The new junction points were also installed in the existing running-line (clipped and padlocked when trains required to pass).

Once train services resumed, summer 2013 saw work concentrated in areas clear of the running line, such as laying of track on the new land created by the Cob widening, building the outer part of the new platform, and installation of new signals and other S&T equipment.

Nov 2013 saw train services cease (except for a brief interlude for the Christmas services), and an intensive programme of works begin, including:

15th March 2014 saw the new signalling system successfully tested and commissioned, less than 12 months after installation of signalling equipment in the new relay-room had begun.

Temporary colour-light signals were initially used in place of semaphores for the advance starter and trident, until the final semaphore versions could be commissioned (on 4th May and 4th Nov respectively).

22nd March 2014 saw the remodelled station opened on schedule, with the first trains departing on time for Blaenau Ffestiniog and Caernarfon from their respective platforms. 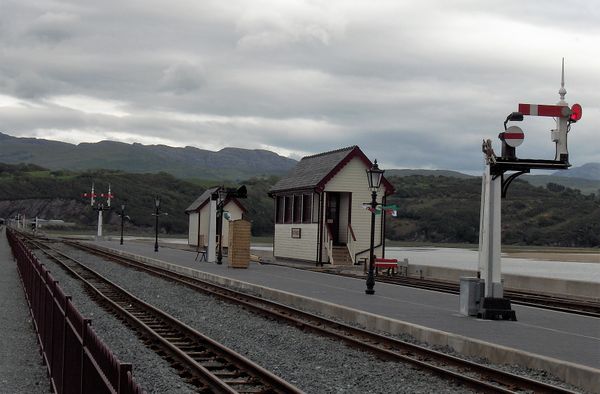 Most of the major elements of the resignalling scheme are shown in this photo taken on the official opening day, from the Trident signal on the far left background to the FR Inner Platform starting signal on the near-right, including the relay-room and signal-box. (The wooden “beehive” hut contains a pump-out for emptying on-train toilets – the wooden hut has since been replaced by a more permanent structure)

All signals are operated by the signal box unless otherwise stated.

The current most comprehensive text on the design, implementation and operation of the new Harbour Station signalling is:

Bob Bloodworth was a late volunteer who was very significant in the installation of the new signalling. His book can be purchased from F&WHR shops, and from the Festrail online shop here.