From Festipedia, hosted by the FR Heritage Group
(Redirected from FR Magazine)
Jump to navigation Jump to search 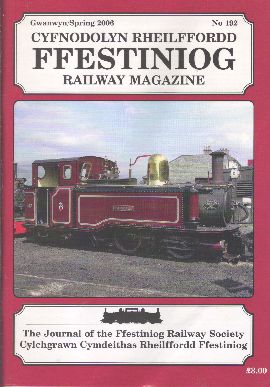 The quarterly magazine of the Ffestiniog Railway Society is published in January, April, July and October and distributed free to all members of the Society. Copies are also available for purchase from the shop at Harbour Station. The current editor is John Dobson. Previous editors include Fred Gilbert, Trevor Bailey, Peter Johnson, Norman Gurley and Dan Wilson.

From October 1954 to March 1958, Society members were kept informed through a series of irregularly published "Festiniog Railway Society Newsletters". A booklet recording the text of all these newsletters, and some contemporary photos, was published by the Heritage Group in 2004. References to these are listed under FRM but marked Newsletters

You may see references in both printed publications and this wiki to FRM, usually followed by 2 numbers. i.e. FRM-001-01 This refers to the issue of the magazine, and the page no.

For further details of the society and up-to-date membership rates, visit the Society website (external link).