From Festipedia, hosted by the FR Heritage Group
(Redirected from FRS)
Jump to navigation Jump to search 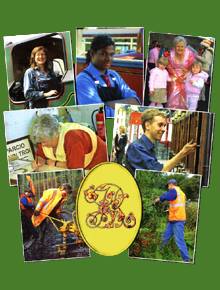 The Festiniog Railway Society's (note only one 'f') origins can be traced back to the Bristol Meeting called in Bristol on 8th September 1951 at the Bristol Railway Circle's permanent club room in Clifton by seventeen year old schoolboy Leonard Heath Humphrys.

Prior to this a number of individuals, including James Boyd, Patrick Whitehouse and Bill Broadbent, had made tentative enquiries into the possibility of bringing the Festiniog Railway back to life but the complications of the Festiniog Railway Company's share ownership proved a major obstacle. A meeting called by Portmadoc Urban District Council on 20th April 1951, attended by both James Boyd and Leonard, failed to make any progress. Leonard therefore started writing to the railway press and also to the then FR Company Chairman Cynon Evan Davies. Having received some measure of support he called the Bristol Meeting. Among the thirteen that attended that meeting (and were somewhat surprised to discover that Leonard was only seventeen years old!) were Allan Garraway, John Bate, Fred Gilbert, Bill Winter, H. Holcroft and Vic Mitchell. [1] Leonard Heath Humphrys arrived late to be greeted by this group of (in all) twelve seated in anticipation around an empty table. They had all travelled many miles to be in Bristol.

Two further meetings were held at Barnet in 1951 (the first on 7th October and the second to pick up the pieces early in 1952) [2]and then on April 20th 1952 a meeting at the premises of the Stephenson Locomotive Society in Kensington resulted in the group adopting the name "The (Proposed) Festiniog Railway Preservation Society". These meetings were held in an unhurried atmosphere on Sunday afternoons with Fred Gilbert replacing Leonard Heath-Humphrys as secretary once Leonard was called up for National Service in autumn 1952 and his nominee, a Mr. Rear of Waunfawr proved to be inactive. After the first of these three meetings Fred Gilbert engaged his solicitor, Leslie Taylor Harris to investigate the Festiniog Railway Company's principal proprietorship. This led to further contacts with Cynon Evan Davies which identified sufficient shares and debentures to provide a controlling interest in the Company. A further meeting took place at the Great Northern Hotel (Kings Cross) in January 1953. Partially as a result of the activities of this committee a very generous offer of a large holding of ordinary shares of the Festiniog Railway Company was made available to Alan Pegler. It was on a cold foggy Saturday afternoon, 2 January 1954, at Finchley Town Baths, that Alan Pegler's representatives (Leslie Smith and Trevor Bailey) told the committee that he was prepared to buy the Company if the committee would form a Society to help him run the railway. Alan Pegler went on to acquire control of the FR Company on 24th June 1954 and subsequently transfer the shares to the Festiniog Railway Trust. [3][4] At this point the name Festiniog Railway Society was adopted with its first newsletter, already reporting voluntary activity on the railway, published in October.[5]

The Society, which up to that date had existed as an unincorporated body, was registered as a Company Limited by Guarantee (No. 542449) on 24th December 1954, with the title Festiniog Railway Society Limited. The Society had twelve directors - Bill Broadbent, Trevor Bailey, Fred Gilbert, Leonard Heath-Humphrys, Vic Mitchell, WK Nelson, Norman Pearce. Allan Garraway, Ron Garraway, Bill Winter, Tom King and Col.RH Rudgard (Chairman). (Winton, 1975) [6] In 1997 the society became a registered charity (No. 1064178) and changed its name to its current title, Ffestiniog Railway Society. When the Society was registerred as a limited company it had capital of £49. 12s. 6d subscribed by L Taylor-Harris (£14.12.6d) with Bill Broadbent, Allan Garraway, Gilbert, Heath Humphrys, Tom King, Nelson and Bill Winter stumping up £5 each.[7]

The support given to the railway by the Society has expanded considerably over the years. Early on in the Society's existence area groups were established which provided a channel for voluntary help (many of the groups running week-end working parties) and for local fund raising and publicity. The Society has been able to make significant donations to the railway, mainly to funds supporting specific projects. In particular, Minffordd and Penrhyn hostels have been funded and managed by the Society, providing budget accommodation for both long term and short term volunteers.

Membership is open to all and the benefits include free and reduced-rate travel on the FR (see Travel Privileges) and a quarterly magazine full of news from and about the world's oldest railway company. For more details see the Society Website.

The Society is also referred by the initials FRS and FRSL in this wiki and other publications.

Several area groups The Area Groups of the FR Society have performed vital roles for the railway since the earliest days of preservation. They coordinate transport to the railway, organise volunteer working parties, promote the FR in their region and raise vital funds. Many of them also organise meetings for local members and FR supporters to get their ‘Ffestiniog fix’ when not able to get to North Wales. Whilst they have seen a decline in recent years as it has become more difficult to recruit younger members. Times have changed too; the original value of sharing transport to North Wales declined as more people had cars, and the development of internet forums and groups meant that supporters could keep "in-touch" with the railway from afar. The remaining area groups are still important to the railways and contribute greatly to their development.

Some of these area groups also welcome WHRS members - these are marked with a (*).