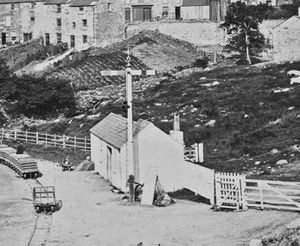 The Festiniog & Blaenau Railway had a 15 year existence as a narrow gauge railway connecting with the Festiniog Railway. It from Dolgarreg Ddu near the FR's Duffws station in Blaenau Ffestiniog, eastwards to Llan Ffestiniog. It was later absorbed by the Bala and Festiniog Railway (backed by the GWR) and converted to standard gauge.

It was originally promoted on 4th October 1866 by the Holland and Casson families. The line was built in 1867-8, mostly under wayleaves, to a route and loading gauge that would allow conversion to standard gauge 4ft 8 1/2 ins. Colonel Tyler inspected the line on 21st May 1868 and reported to the BoT on 26th May 1868. The Board authorised passenger carrying from 5th June, whereas, the F&B had been carrying passengers since the official opening on 30 May 1868.

The permanent way was laid in flat bottom sectioned rail, weighing 38lb per yard. The sleepers were of larch, and the rail was spiked to the sleepers. Joints were spiked on a bedplate.

Initially, for 3 months, it was operated by the FR under contract until the arrival of its own locomotives. During this period, the timetables were extremely well dovetailed. Once the F&BR ran their own service, the exact opposite happened. Once the F&BR locomotives arrived, FR locomotives were hired only when required. It was envisaged that the line would provide an outlet for finished slate from quarries to the east of Blaenau, such as Graig Ddu, as well as providing transport to and from work for quarrymen from Llan Ffestiniog. As the F&BR made a junction with the FR, traffic in goods, coal, flour etc. from Portmadoc was also anticipated. Passengers from Llan who wished to travel to Portmadoc had to walk to the FR station at Duffws.

The chairman of the railway was John Casson in 1868, John Whitehead Greaves, Samuel Holland and his nephew Charles Holland were also on the Board. Relations between Samuel Holland and the Festiniog Railway were not always good, he believed the FR exploited its monopoly position. At the time of building the F&BR relations were good and it was billed as an extension of the FR to bring extra traffic to the FR and to extend the benefit of a railway to Llan Ffestiniog. Later the F&BR was used as the first part of an attempt to reduce the monopoly of the FR. Samuel Holland's later grand scheme was the 1871 proposal for construction of the Merionethshire Railway, a line that would have taken slate to the coast, over the hills on the southern side of the Afon Dwyryd, and an interchange with the Cambrian Railways. This proposal never got past the drawing board, but its threat had the desired effect of causing the FR to rethink its rates for slate! Holland continued to seek ways to remove the FR monopoly. He supported the LNWR proposal to access Blaenau Ffestiniog in the 1870s and was a major player in the promotion of the Bala And Festiniog Railway, a standard gauge line between those two places whose promotion was supported by the GWR as a means of obtaining access to the Blaenau slate traffic to compete with the LNWR.

The F&BR was eventually bought for the sum of £20,000 by the Bala & Festiniog Railway, on 1st August 1876. This was a free-standing branch until 1st November 1882, when the B&FR line reached Llan Ffestiniog. As the Bala And Festiniog Railway was a puppet of the GWR, this purchase effectively meant it was taken over by the GWR. Conversion of the F&BR to Standard gauge was undertaken by a contract let to John Price Edwards of Chester to the value of £10,381. The line was re-laid to standard gauge between April 1882 and September 1883. The replacement of the viaduct near Bethania was completed in August 1882, the narrow gauge line was temporarily diverted during its construction. For the rest, dual gauge track was laid to keep trains running on the line. From July 1882 to September 1883 the narrow gauge operated from Ffestiniog to a temporary terminus just short of Diphwys, until the standard gauge station and sheds were complete. Colonel Rich was invited to finally inspect on 31st July 1883, but refused to allow operation due to additional work being required. His acceptance was given on 1st September even though the stations at Diphwys and Manod were not completed in time. By the 4th, narrow gauge operation ceased, and on the 10th September 1883 standard gauge operations commenced.

The Bala and Festiniog Railway Company was incorporated under the Bala & Festiniog Railway Act 28th July 1873 and was amalgamated with Great Western Railway, GWR, Company as from 1st July 1910 by Great Western Railway (General Powers) Act 26th July 1910. Controlled ultimately by GWR (who carried out the maintenance of the railway), operationally it was run by the GWR on behalf of the B&F Co until 1910.

Wooden viaduct on the Festiniog and Blaenau Railway near Tan-y-Manod, c. 1877/8

Passengers, rather than freight, were the mainstay of traffic during its narrow gauge existence. An example year gives a 23% share of income for freight. Quarryman rate accounted for most of the income. When taken over by the Bala And Festiniog Railway, passenger traffic increased to the maximum in 1877 in excess of 86,000 passengers, and nearly 17,500 season tickets. The goods traffic peaked in 1881, but less than half this was slate - the remainder was coal. The volume of slate carried varied year on year from a low of less than 2000 tons to more than 9000 tons, The only quarry served direct was that at Graig Ddu, with a connection at Tan-y-Manod and this provided nearly 50 percent of the traffic.

The line made a profit in every year recorded except for 1878, when a large amount was set aside for permanent way renewals. Staffing requirements were small, with only 13 people listed as employed from manager to track gangers in 1877, rising to 15 in 1881

Light locomotive repairs and carriage repairs were usually carried out in Llan Ffestiniog by GWR staff sent up especially. More heavy locomotive work saw engines shipped to Minffordd and Dolgellau, for onward transfer to GWR Wolverhampton. Occasionally, when both engines were out of commission, a locomotive was hired from the FR Co.

Two Manning Wardle 0-4-2ST locomotives, 259 and 260 of 1868, were used on the Festiniog & Blaenau from 1868 until conversion of the line to standard gauge in 1883. They were No.1 and No.2 and may have had the names Scorcher and Nipper respectively, although there is no evidence for this apart from Boyd's writing on the line. They had 8½" x 14" cylinders. The Manning Wardle records state that they were delivered new to "Festiniog". Given the lack of other rail access, they will have been delivered over the FR. When they were maintained by the GWR at Wolverhampton during the period 1876-1883 they were shipped from Minffordd, so they must have been run over FR metals to be sent for repair, but as they were much taller than the FR loading gauge and had a long rigid wheelbase, they must have been partially dismantled. Following the takeover by the Bala And Festiniog Railway and subsequent re-gauging, they were most likely scrapped at Swindon. Boyd stated the two locomotives were sold to the Ruabon Coal & Coke Co, but there is no evidence for this.

Passenger stock initially consisted of 20 quarrymen's carriages (built by J.H.Williams, Porthmadog), two third class carriages, a composite first/second, and guards van. The four passenger carriages were built by Ashbury Carriage and Iron Company. The GWR provided a further third class carriage and a composite carriage in 1878. The number of quarrymen's carriages had reduced to 19 by 1883. The F&BR started with eight wagons of its own, however additional wagons were loaned from the FR Co. to start with, but from 1878 the FR insisted these were hired. 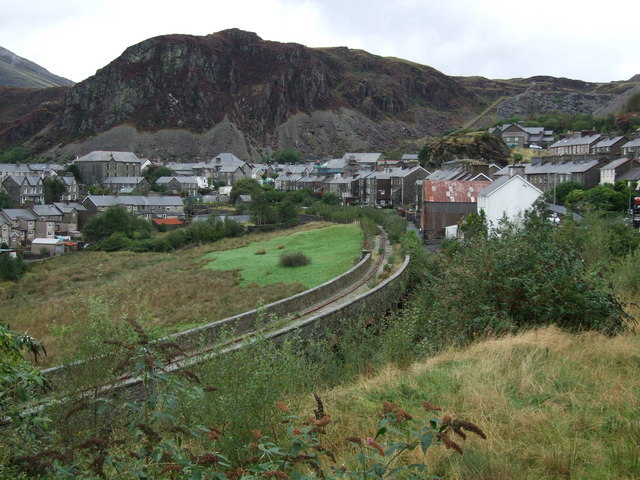 The remains of the F&B as converted to standard gauge.