Carriage 2090 is a WHR brake third carriage with toilet.

2090 was delivered new to Dinas in September 1997 from Winson Engineering in Daventry. It runs on bogies imported from South Africa. It was originally fitted with 28 seats, four of which tip up to create two wheelchair spaces. The non seating end of the carriage contained a guard's and luggage area.

It spent five weeks at Boston Lodge in January-February 2004 for maintenance and a repaint into the disabled-friendly livery based on that applied to FR carriage 122. Six seats were also removed to provide parking space for the buffet trolley and storage cupboards.

In early November 2008 2090 was transferred to Minffordd by road for conversion at Boston Lodge to a service carriage, providing toilet and buffet facilities as well as the guard's van; the aim being to create a sister to Carriage 2010. However it was decided to use 2020 instead, that vehicle being converted to Carriage 2011. The decision was made to convert 2020 and not 2090 because the semi opens are unpopular in wet weather so instead of losing 21 covered seats the set has lost 36 open seats.

2009 saw 2090 lose another bay of six seats and the addition of a toilet, in preparation for the longer journey times planned with the opening of the line.

2090 is now the only third passenger saloon from the first batch in its original condition with drop-lights, metal-framed seats and plywood tables. It will need a new outer skin at some point to replace the aluminium-faced ply initially used by Winton. 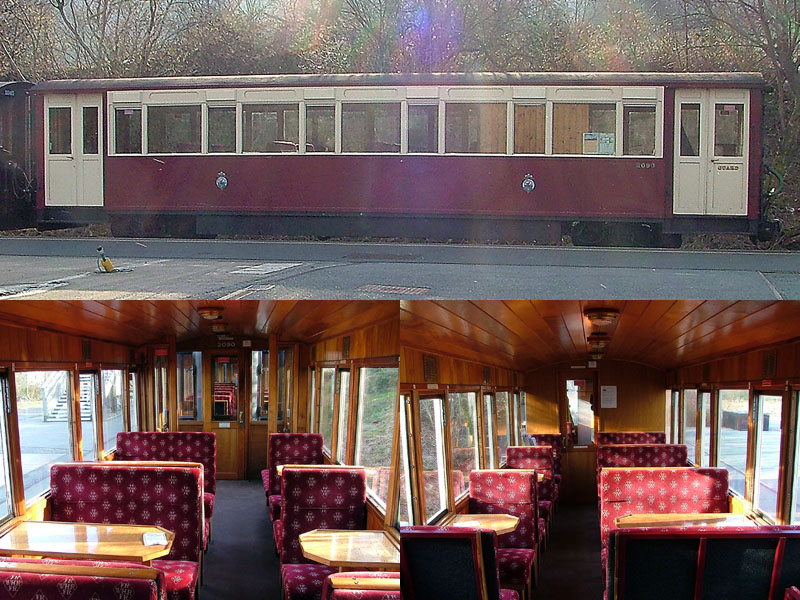 The external view shows the double doors at both ends to facilitate easy loading of wheelchairs (left end) and stores/wheelchair ramp (right end). The interior views (of the passenger area) show the matchboarded ceiling and sides, with light fittings and PA speakers mounted down the centre of the carriage. Diesel fired hot air heating fitted. The guard's office is at the down end of this vehicle including the handbrake, emergency brake setter and PA system (Radio / Tape / Microphone). The left bottom picture shows the up direction (to Blaenau Ffestiniog) view, and the down direction (to Caernarfon). All the 2000 series carriages have the double seats on the left looking in the up direction. Note in the picture the tendency for the body to hog - buckle upwards in the middle - because of the design issues outlined under Carriage 2040.