From Festipedia, hosted by the FR Heritage Group
(Redirected from Horse Operation)
Jump to navigation Jump to search 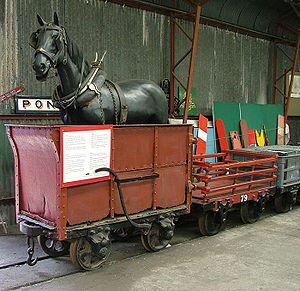 The only surviving original Horse Dandy (No.50) is shown on display at the Welsh Highland Railway (Porthmadog).

Horse operation was a feature of the FR from its opening until the introduction of steam locomotives.

James Spooner's elegant survey for the Festiniog Railway described a line of railway falling at a fairly steady gradient from the upper terminus near Blaenau Ffestiniog (700ft) to Boston Lodge, at the eastern end of the Cob (Sea Level) and was designed to allow loaded waggons to run down the line under gravity with empties being hauled back up by horses.

For a period after the opening of the railway, in 1836, the smooth line of James Spooner’s survey was interrupted by a pair of inclines that took the line over a shoulder of the Moelwyn mountains. Spooner had planned for a tunnel but had been overruled by Henry Archer on the grounds of cost. After a couple of years, and as traffic developed, the inclines became such a hindrance that Spooner prevailed and, in 1839, work began to drive the tunnel. It was opened in 1842 and from then on the FR was able to operate as it had been designed; loaded waggons exploiting the free power of gravity and being taken back up to the quarries by horses.

Each horse could haul 7 or 8 slate waggons and, though they are usually referred to as ‘empties’, they were, in fact, frequently loaded with a lucrative back traffic of goods for the growing community at Blaenau Ffestiniog. Each train included one extra wagon, known as a Dandy. These were high-sided open wagons with a door at one end, designed to carry the horse on the downward journey, permitting them to rest between duties. The earliest examples were wooden, as were the contemporary slate waggons. Later (10 were built in late 1861), iron dandies were built at Boston Lodge. 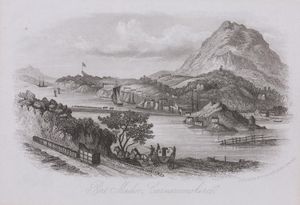 A contemporary engraving of a horse hauled train of waggons on the Cob together with a gravity train at Rhiw Plas.

In the early days, while traffic was relatively light, the operations could be described as leisurely, though the Company laid down a timetable and employed a constable to ensure that it was adhered to. To begin with the company worked the line with its own staff but, after about nine months, it was found to be cheaper to let the work out on contract (put out to tender each year), retaining only the constable to regulate matters and the staff at the weigh houses. Dwellings for the constable and the weighmaster were created from the former barracks at Boston Lodge.

The line was divided in to four sections, each approximately three miles long. They were:

In John Winton's book The Little Wonder (ISBN 0-7181-2728-5) he states the the FR Co. initially ran the trains by direct labour but later put the running out to contract. One early contractor was Morgan Jones of Rhiw Goch Farm, but by December 1843 this had been taken over by Robert Roberts of Pensyflog, Portmadoc and held the contracts for all sections right up until the introduction of steam locomotives in 1863.

In mid 1857 (from C.E. Spooner letter book) the operators for the 4 sections appear to be (in random order);

None of these names can be found on census records.

At each of the ‘stations’ there was a loop where trains would pass and horses would be changed. Those from the Up train would be detached and ride back Down to the station they started from and those from the Down train finished their rest and took the Up train along the next stage of its journey.

In an early example of planned maintenance horses were rotated between sections to ensure regular access to the farriers at Boston Lodge and Rhiwbryfdir. There was also a substantial stable and smithy at Cae Ednyfed, just by the present Minffordd station.

At Boston Lodge dandies would be removed from a Down train for the journey across the Cob; a contemporary engraving shows a train of ten waggons being hauled by a pair of horses together with a Down train comprising eight waggons and a dandy. 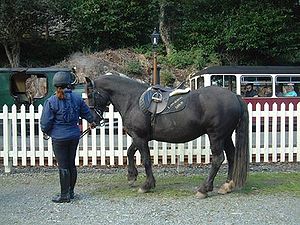 FR Co. staff member Rebecca Kitchin and horse, Lasgarn Jake, during the Vintage Weekend at Tan y Bwlch. Jake is a variant of the Welsh Cob breed, believed to have been used on the slate trains before steam was introduced.

In 1844 the railway carried 22,198 tons of slate, the equivalent of 37 waggons per day, but the traffic was not constant as the quarries’ output varied according to the seasons. By 1862 the tonnage had increased to 54,384, the equivalent of about 90 waggons daily, and the methods of working were under some strain. To increase capacity it had become the practice to work several trains together through each section. Up trains were sometimes hauled by two horses and Down trains were combined, with the dandies grouped at the rear so that they could be easily separated to release horses at the various stations. It was only after the introduction of steam locomotives in 1863 that the legendary, full-line, gravity trains became the norm.

A timetable for 1856, written by Charles Easton Spooner, survives and shows six trains in each direction each day. It is interesting to note the pace of the trains. A down train was allowed 18 minutes between stations, equating to 10mph whereas Up trains proceeded at 2¼ mph, taking about 6 hours to complete the journey from Portmadoc to Rhiwbryfdir.

The graph below is a representation of the 1856 timetable, on which the black line represents the Down trains and the brown the Up. It can be seen that one Down train is scheduled to rest overnight at Cae Ednyfed while one Up train stopped at Hafod Llyn and another at the Tunnel. There is some evidence that these arrangements were flexible to meet the convenience of the drivers. The rotation of horses was achieved by periodically running the first Up train non-stop through Tunnel station.

A modern train-graph representation of the 1856 timetable.

Contemporary records in the Archives reveal that a typical Down train at this time comprised 25 slate waggons and 4 dandy wagons. At that rate the railway had a theoretical capacity of 150 waggons, whereas the actual average was only 90, suggesting that the number of rakes in each Up train was being reduced as required.

An 1859 inventory of Boston Lodge records “16 Horse waggons £7 each, 7 old horse waggons and off the road £3/10/- each and 20 old horse waggons for yard use £2 each”, implying that only 16 dandies were in use at that time and this fits with the railway running at about two-thirds capacity. The £7 waggons were the new iron dandies.

Operating at full capacity a six train service would have required 20 horses as a minimum but it is likely that there were far more horses in use. Even though the native Welsh cobs are described as strong stocky animals that can pull and carry heavy loads for prolonged periods of time, it is normal for draught horses to work for only about half the time.