Stationmaster at Tan y Bwlch from 1968 into the 1970s who spent the winter full time with S. & T. work [1] in "Northern" regions (at the top end of the line). That became one of the reasons for his nickname Lord North. He first joined the FR PW department from Fairbourne in early 1968 as part of the push to Dduallt. Occasionally he paid visits to Boston Lodge for materials with Alistair. 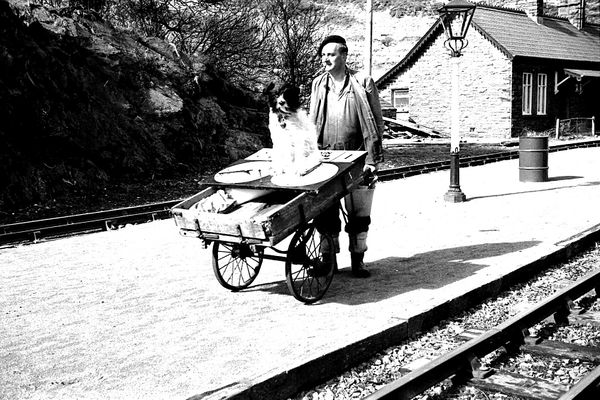 John Harrison in working rather than station master's dress and with his dog, Sally, at Tan y Bwlch in April 1969. Photo: John Ryan.

He had a stentorian voice, wore his cap at a rakish angle, and, known as Lord North, was the General Manager's representative in trying to keep an eye on the antics of the Deviationists as far as their activities affected the day-to-day operations of the railway. He lived in the Tan y Bwlch station house and his wife, Nell, ran the station shop.

John suffered a stroke in early February 1977.[2] By Spring Bank Holiday week he resumed light duties. He left Tan-y-Bwlch and the FR in 1978 after ten years in residence when domestic circumstances required his removal to his mother's home in Fairbourne.[3]