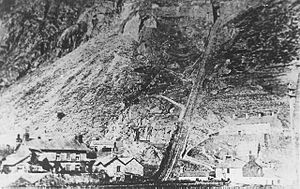 The Oakeley Quarries were a collection of quarries in Blaenau Ffestiniog owned by the Oakeley Family. They were an important customer of the Festiniog Railway. 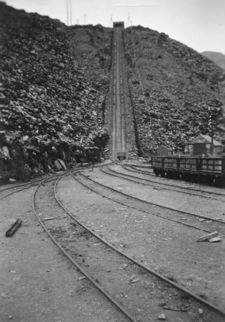 Oakeley Quarry originated in 1818 when Samuel Holland leased a small quarry at Rhiwbryfdir farm. This venture was successful and was sold in 1825 to the Welsh Slate Company. Holland then opened a new quarry at Gesail, above Rhiwbryfdir. In 1839 Holland's Gesail quarry (also know as the Upper Quarry) became one of the first users of the Ffestiniog Railway to send slates to the wharves at Porthmadog. By 1840 underground working had begun and a large steam-driven cutting mill was opened around 1860. By the mid-1870s over 14,000 tons of finished slate was being produced annually. [1]

During the same period, Nathaniel Mathew had leased land between Gesail and Rhiwbryfdir and opened up Gloddfa Ganol (in English: Middle Quarry). Gloddfa Ganol, also known as Mathew's Quarry was a pioneer of the use of slate dressing machines and was an early user of steam powered mills and inclines. By the mid-1870s Gloddfa Ganol was producing more than 10,000 tons of finished slate annually.

There was a third major quarry nearby. The Lord Palmerston Quarry was located below and south of Gloddfa Ganol. Its extensive underground workings were connected to the Ffestiniog Railway by 1838 and it opened the first steam-driven cutting mill in the district around 1840. By the 1870s annual production was around 50,000 tons of finished slates.

The leaseholds for both Gesail and Gloddfa Ganol expired in 1878 and the landowner, W.E. Oakeley consolidated the Upper and Middle quarries into a single operation.

The Lord Palmerston Quarry continued as an independent quarry, but had been pursuing aggressive and dangerous mining methods. A number of underground collapses culminated in several significant rock falls in 1882 and 1883 which threatened to destablize the two Oakeley-owned quarries above. Oakeley sued to owners of the Lord Palmerston Quarry and took ownership of it, amalgamating all three into a single operation known as the Oakeley Quarry.

At the end of the nineteenth century, Oakeley acquired the adjacent Nyth y Gigfran and the nearby Cwm Orthin Quarry. At their peak these combined quarries produced 60,000 tons of slate annually and were the third largest in the United Kingdom.

Extensive use was made of stationary steam engines to run the cutting mills, dressing sheds and inclines in the quarry, although from 1906 hydro-electric power was introduced.

Oakeley continued to produce significant tonnages of slate through World War Two, but experienced a rapid decline in the 1960s, along with the remainder of the British slate industry. The quarry closed in 1971.

The quarry re-opened as a working quarry and tourist attraction in the mid 1970s under the name Gloddfa Ganol. This enterprise was sold to McAlpines in 1997 and the tourist side of the business was closed. The quarry continues to operate in 2007.