From Festipedia, hosted by the FR Heritage Group
(Redirected from Robert Fairlie)
Jump to navigation Jump to search

Robert Francis Fairlie was a railway engineer known for his patented double engines. The Double Fairlie locomotive has long been associated with the Ffestiniog Railway, since the first successful locomotive of the type was demonstrated there in the 1870s.

Robert Francis Fairlie was born on 5 April 1830 in Glasgow, the son of T. Archibald Fairlie, an engineer. (This birthdate, although conflicting with March 1831 as shown in various FR sources, is as given in his 2007 Oxford Dictionary of National Biography (DNB) entry by Geoffrey Hughes, which corrects other known errors which John Ransom (in Narrow Gauge Steam, 1996) pointed out in the original DNB entry). In common with many aspiring locomotive engineers of the time he received training at Crewe and Swindon, where he may have come into contact with Charles Easton Spooner. in 1853 he was appointed Engineer and General Manager of the Londonderry & Coleraine Railway and later went to India for the Bombay & Baroda Railway.

Having returned to Britain and established himself as a consultant with offices at 56 Gracechurch Street, London, E.C. Fairlie became involved with a number of South American railways. He also became involved with George England and, while visiting on railway business began to pay court to England's daughter, Eliza Anne, who was then under the age of 18. In January 1861 England asked Fairlie to desist for a couple of years. Fairlie apparently agreed but, in January 1862 Eliza and her sister went to the Crystal Palace (of which George England was a director and a supplier of cast iron components) and from there had eloped to Spain with Fairlie.

On his return to England Fairlie was arraigned in the Criminal Court on a charge of perjury, having falsely stated that England had consented to the union, in order to obtain his marriage licence.

Unfortunately for England's reputation, during evidence, it was revealed that Eliza had been born out of wedlock; her mother had been England's mistress at the time and they were not married until his first wife died. Under the law at the time, therefore, England was not recognised as Eliza's father, so he had no right of consent or dissent to her marriage. The case collapsed and a Not Guilty verdict was passed on Fairlie. As John Ransom remarks in FRM-133, "W.S.Gilbert could not have concocted a better plot." The case cannot have permanently soured relations between the two men for Fairlie continued to consult with England on engineering matters and would, within a few years, take over England's business.[1]

The double engine and the Ffestiniog Railway[edit source] 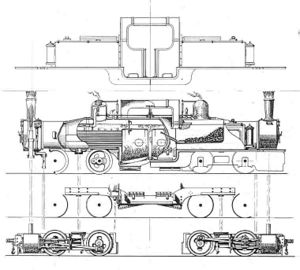 In 1864 Fairlie published his pamphlet Locomotive Engines, What They are and What They ought to be in which he was critical of contemporary locomotive design and set out his ideas for articulated locomotives and their benefits, principally the better steam generating capacity of the double boilers and the use of all wheels for traction, combined with the ability to traverse sharper curves than conventional locomotives.

Two early Fairlie Patent locomotives were built by James Cross & Co of St Helens, but the third was built in 1869 by George England & Co. of the Hatcham Iron Works. This was the Festiniog Railway's first Fairlie Little Wonder. It was delivered by August that year, and shortly afterwards George England retired. England's business was taken over in September by Fairlie, in partnership with England's son George junior and J. S. Fraser (of the GWR), trading as the Fairlie Engine And Steam Carriage Company.

Little Wonder proved to be the first truly successful Double Fairlie and a series of trials held against the earlier England Engines attracted considerable international attention. Because Little Wonder and the FR had done so much to promote his design Fairlie gave the FR the right to use his designs royalty free. Thus the FR continues to build double engines to this day.

With the death of George England junior in July 1870, the company's manufacturing at Hatcham came to an end. Fairlie then licensed other manufacturers to build his patent locomotives and other railway equipment through his Fairlie Engine & Rolling Stock Company with offices in Victoria Street doing design work and sales.

By 1881, George England (1811–1878) was dead and Robert Fairlie and his wife Eliza were living at 13 Church Buildings, Clapham with their children, Robert, John, Lily and Jessie (their other son, Frank, was at Charterhouse School as a boarder according to the 1881 Census; also see the Times announcement of Saturday, January 5, 1889 which is the marriage of Frank, "second son of the late Robert Francis Fairlie" to Fanny Ethel Mant) and Robert's mother in law, Sarah England, together with Frances Knight (cook) from Norfolk, also four domestic servants and Emma Bermoker (possibly an au pair or governess) from Vevey in Switzerland.[2] Robert Francis Fairlie died at his home, Woodlands, Clapham Common, London on 31 July 1885 and is buried at West Norwood Cemetery.