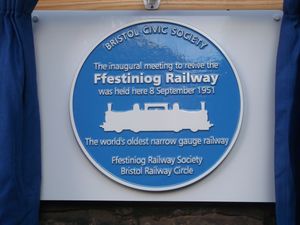 The meeting which is generally recognised as leading to the formation of the Ffestiniog Railway Society (FRS) and the revival of the railway took place in Bristol on 8th September 1951.

It was not until 6th December 1962 that the Ffestiniog Railway Society held the inaugural meeting of the Bristol Area Group at the Bristol Railway Circle's clubrooms. This followed a proposal in the Ffestiniog Railway Magazine for a South West Midlands Group but it was decided that Bristol would make a more suitable centre than Gloucester. Jim Fraser was elected Chairman and Mark Warburton Secretary. There were plans for "homework" and exhibition stands. Further meetings were held at the Bristol Railway Circle's rooms, at St Mary's House, 36 Tyndall's Park Road, Clifton, [1] These are the very same rooms at which the 1951 meeting was held, described by Vic Mitchell as "an empty cellar in reality". Group membership costed 2/6d per year to cover administration costs. By April 1963, sixty three members and friends attended an Ivo Peters colour film show of narrow gauge railways of Wales and the Isle of Man. By the autumn of 1963 the cost of membership had been revised to 3/6d but a quarterly newsletter, "The Fairlie" was sent to all members.

By Summer 1966 the Group had a workshop and "Homework" evenings were held each Wednesday with the making of "Whistle" boards for the railway the first task undertaken.[2] In Summer 1966 Ken Marchant of Radstock took over as secretary. In Spring 1967 there was a delay with the workshop's electric welding plant and a deviationists trolley was nearing completion. Also in Spring 1967 working parties at the FR were being organized and some members had undertaken the installation of a cistern in the "gents" at Tan-y-Bwlch.

Bristol has other connections with the FR. The locomotive James Spooner was built in Bristol by Avonside Engine Company in 1872. In addition Livingston Thompson's, Welsh Pony's and Merddin Emrys's boilers were repaired by Avonside in the 1920's and 30s. FR Carriage 14 was built by Bristol Wagon and Carriage Works Ltd in 1897 along with 15 others for the Lynton & Barnstaple Railway. The ex Harrogate Gas Works 0-6-0 saddle tank loco 'Volunteer' (The Peckett) was built by Peckett & Sons in Bristol in 1944. Its wheels were sent by the FR back to Pecketts in 1958 for flange and tyre re-profiling.

Another link between Bristol and the FR was that Porthmadog based (and often Porthmadog built) sailing ships called at Bristol. Once they had delivered slate to London, Hamburg etc a cargo to carry back to a port not too remote from Porthmadog was attractive to get paid for some of the return journey. Not much cargo was carried into Porthmadog so the alternative was to carry ballast with no reward. A paid for cargo to Dublin or Liverpool was ideal but Bristol Channel ports were some of the better alternatives. For pictures of Porthmadog ships in Bristol see Hughes H (1969) Immortal Sails, T Stepenson & Son, plates 27 (the Dorothy, 1st of the Western Ocean Yachts and a Newfoundland trader), 30 (the William Moreton) and 32 (the Walter Ulric launched 1875 reg. tonnage 112) and Hughes E & Eames A (1975) Porthmadog Ships, Gwynedd Archive Services, plates 55 (the William Prichard, built David Jones in 1903) and 69 (the John Llewellyn, built 1904 by David Jones).

There is a further connection between Bristol and the Ffestiniog Railway. The brother of Livingston Thompson (after whom the locomotive was named) was John Graves Thompson (1812 – 1902). He joined the FR Board in 1851. He was chairman from 1877 to 1893. He lived at Coombe House, Canford Lane, Westbury on Trym and later at 24 Caledonia Place, Clifton.[3]

Two ex British Railways steam fitters from the Bristol area moved to work as permanent staff on the FR in early revival days. These are Roger Goss who joined the staff in 1963 and Andy Putnam who joined in 1975.