Numbers 1 and 2 are the big white building facing west and looking out onto the curve of the main line. When first built they had dry stone-built stables along their front walls, where the small lawns are now, used to house ponies that hauled stone out along the Cob. The history of this building is quite complicated - it was originally the barracks for men working to build the Cob and quarry stone from the hillside behind. In 1836 it was renovated to accommodate the Weighmaster and Constable[1]. At some later date, as yet undetermined, it was divided to provide four flats; entry to the upper floors was by steps on the rear wall. The qualifications for tenancy of these dwellings during the period of the old FR Co. have not yet been discovered. The new administration inherited some sitting tenants whose connections to the railway have not been sorted out. As the railway had had no engineering staff for more than a decade they may well have been normal commercial lettings; Robert Evans had to get an income from somewhere, if only to pay his own salary![2] 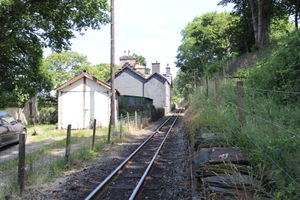 Numbers 3 and 4 are the buildings immediately above Boston Lodge Halt, beyond the garage built on the old turntable. They were once much smaller, and had the railway running along the path in front. When the line was improved for locomotives a cutting was made behind the cottages, to straighten the alignment, and they were extended by about half their original depth. From the outside this is evident in the double pitch roof line. It is equally apparent, inside, in the thickness of the former back wall. No.3 is the traditional house of the Locomotive Superintendent. William Williams was an early resident.

In the 1930s the FR advertised a hostel at Boston Lodge for tourists. The accommodation was reportedly spartan. It was either cottage 3 or 4 but which is not clear from Boyd. He says in the 1930s it was used as a Youth Hostel.[3] It featured in "Festiniog Toy Railway" leaflets of the 1930s.

As at April 2006 the whole house is let to Paul Martin, formerly an employee at the Lodge and now a senior volunteer driver, engineering project leader and leader of Ricket Rescue, the support team for Blanche. An earlier, post revival, tenant had been Bill Hoole who, by odd coincidence, would have taken Blanche as his regular loco following its rebuilding, had he not suffered the strokes that ended his driving career. Following Bill the house had been let to two other Lodge employees and had, for a period, returned to the former arrangement of separate flats.

As soon as the sitting tenant was removed (see Immortal Rails) the house was gutted, refurbished as a single dwelling and let to an early Lodge employee, John Halsall, as part of his package when he joined the permanent staff; he continued to occupy the house in his retirement. His knowledge of carriages and the changes to the Works since 1955 was often consulted. By virtue of his location, he also acted as unofficial 'watchman' for the site.

After his death, the house was rented to Vicky Towers, a former supervisor in the Booking Office at Harbour Station.

At one stage during the post-54 administration, after a staff tenant had left the Company, an attempt was made to sell this cottage but, fortunately, it foundered and No.3 was available to be let to Mick Whittle when he assumed the role of Loco Superintendent. After his resignation the tenancy passed to a senior volunteer driver for a period before being let to another member of the Lodge staff. More recently it was home to FR 'IT' Manager Iain Fraser until 2018.

The Rev Timmy Phillips was the tenant for some time before the FR revival began and for a while afterwards; it was his efforts to keep Boston Lodge secure that saved a great deal of our priceless heritage from scrap men, vandals and souvenir thieves. Timmy built the garage on the turntable which had fallen out of use in about 1934, in the hope that he could save himself the chore of turning his car in the narrow confines of the 'drive' to this pair of cottages - it didn't work! After Timmy's death No.4, including the garage on the turntable became the home of another former early revival volunteer when he joined the Lodge staff and he continues to live there in his retirement. [3]

This might also be considered a "residence". It was once the Loco Superintendent's office but from 1936 it was leased to Timothy Phillips for 10 years presumably as a holiday cottage. Sometime after the revival it was occupied by Ian Smart (hence its name) as a base when staying at the railway.