Welsh Pony is a steam locomotive built for the Festiniog Railway in 1867. Part of the second batch of locomotives built for the line, it continued in use until c1940. Following a prolonged period out of use, including time spent on a plinth in the car park at Porthmadog Harbour Station, Welsh Pony was taken into the works at Boston Lodge in 2014 in order to be returned to steam. 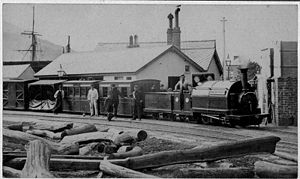 Welsh Pony at Portmadoc around 1872. Click here for more info

This was the 5th locomotive built for the FR and the first of the "Large Englands" (the second was Little Giant). Welsh Pony (works number 234) was built and delivered in 1867. She entered service in June 1867 becoming No. 5 in the FR fleet.

The photograph to the left shows some original features such the first maker's plates and nameplates (which were enamelled). One of the original maker's plates was found buried in Glan y Mor yard in 1961 and is now in the FR archives.[1] The sandpots are also the originals, somewhat taller and narrower than the standard design adopted later. Wooden brake blocks are still in use. By the time of this photograph the whistle had been moved from the cab to the saddle tank and the slide bar arrangement had been altered.

The records show it was retubed in 1873 and broke an axle in 1875. Brass piston rings were tried out but they needed replacing often and so were changed for cast iron ones. In 1878 it derailed at Duffws but the damage was slight. By 1879 it had been fitted with a lubricator. 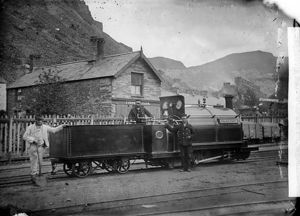 In 1880 it had a major overhaul. 132 tubes were replaced with steel tubes, the firebox was removed and refitted (148 copper stays), two whistles were fitted and a braked shunting engine tender No 2 was built. These facts date this photograph to 1880 or later. Also of note the enamel nameplates have been replaced by brass plates otherwise the engine is much as it was 10 years earlier.

New sandpots were fitted in 1883. In 1887 it was fitted with a Wilson lubricator (i.e. mounted on the cabsheet) and its mileage was quoted as 281,700. The boiler and tank were now wearing out, the tank being patched in 1887 and 1888 and the working pressure being 120lbs by 1889. Work started before it came out of service, new frames were being worked on when it was withdrawn on 23rd September 1890. 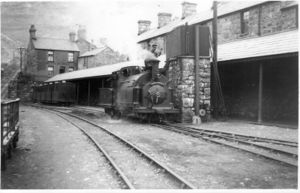 It re-emerged on 29th May 1891 with a new steel boiler from the Vulcan Foundry costing £227-15-0, with Everetts red metal tubes. It had a full cab and the tank, smokebox, cylinders and frames were all new. In October 1891 a new tender No.5 was completed for the loco (wooden framed). A vacuum brake was fitted to the loco in May 1893.

In November 1895 it came off the line at Festiniog but with minor damage. In 1899 the first two tubes had to be removed and the holes left were plugged with brass plugs. In December 1900 a number of 'red metal' tubes burst and 68 were replaced with some taken out of Livingston Thompson. In August 1901 another tube burst so in September the engine was retubed with brass tubes. The smoke box was replaced in 1903 and major firebox work was carried out (64 copper stays) and a cylinder was replaced in 1904. Fire box repairs were carried out often after that.

In October 1907 it came off the line at Minffordd sidings and fell into the standard gauge lines. It took 3 hours to get it back on FR metals. By 1908 the boiler pressure was down to 125lbs. It soldiered on until 1910 when it had a last thorough repair of the firebox. At this time the balance weights were moved fully to the front footplate and made to their final dimensions. In October 1911 the tender for a new boiler was accepted from J Adamson & Co and the loco was taken out of traffic at the end of December. In September 1912 Prince is recorded as receiving Welsh Pony's smokebox. 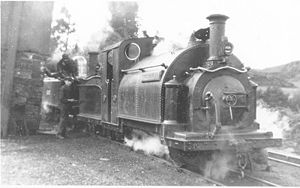 Welsh Pony double heading with Taliesin in the 1920s

The locomotive was rebuilt again in 1915 with a new Low Moor Iron boiler, the outward signs being the pronounced dome cover and the double Fairlie style brass smokebox handrail (which it retains to this day). The engine had a wooden framed tender in the 1920s but this was damaged in an accident at Boston Lodge in August 1924 (see 'Narrow Gauge Rails to Portmadoc' page 78). The replacement came from Little Giant which had been dismantled at the time. This was a steel framed tender and this currently belongs to Linda.

It had heavy repairs between August & October 1925 and then again was taken out of service in May 1928 for a general overhaul which lasted until early 1930, the firebox had much stay work done and four stay tubes were inserted.It was re-tubed with secondhand brass tubes. A new foundation ring was supplied by the Avonside Engine Co. It was re-tubed again between June and September 1932 with steel tubes and had new tyres and the brasses & axleboxes remetalled and the valves set. The tubes were not a success and it was retubed a third time in March/April 1934 together with more firebox work. Company records suggest Welsh Pony was painted in 'Crystal Palace blue' in 1933 (Boyd described the shade as 'sea blue'), but the paint deteriorated and it was later painted in an all over darker livery, quoted as green.

In June 1937 after the boiler inspector cited signs of leakage at several stay heads and tube ends in the firebox. He recommended drill testing the firebox tubeplate, re-tubing the boiler and giving it a hydraulic test before being put into service again. Work was done and it was back in service in August 1938. It worked the 1939 season, pulling its last passenger train under the old company on 15th September 1939 and was running up to at least February 1940. 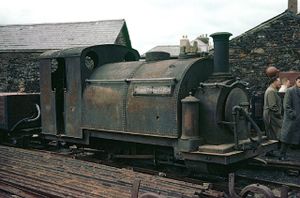 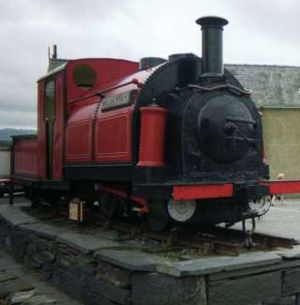 On display outside Harbour Station

During the rebuild of Prince in 1955 the spectacle plates from Welsh Pony were used. The locomotive visited Birmingham Model Railway Exhibition in 1963, but otherwise lay out of use at Boston Lodge until the early 1980s. Welsh Pony's tender was placed behind Linda in the early '60s and has been significantly rebuilt since.

It was later cleaned up and painted red for display outside the Goods shed. At his time it was given dual language nameplates (Welsh Pony on one side, Merlen Gymreig on the other). In March 1985 it was moved to a plinth at the entrance to the Harbour Station car park. It remained there until March 2002, when it was removed in need of a little TLC. 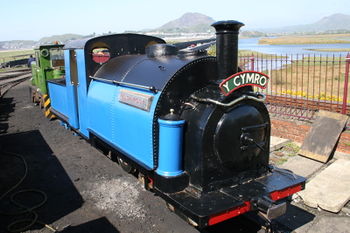 Welsh Pony at Boston Lodge during the 2005 gala

From 2002 the locomotive was stored undercover at Glan y Pwll.

The locomotive returned to Boston Lodge in 2005 for the 50th anniversary event. The wood-framed tender displayed with this locomotive, which had originally been used with Princess, was rebuilt by Andrew Lance with a new oak frame. It was the last original tender with the vacuum brake gear still intact. A few days before the gala the locomotive was painted in Darjeeling blue to wind people up and get people talking about the engine (both loco and tender were painted in blue with a black top to the tank and cab front, as on Prince in 1980).

Welsh Pony was on display again in 2010 for the Quirks & Curiosities event.

In December 2012, Welsh Pony was returned to Boston Lodge prior to the 150th anniversary of steam on the FR. The opportunity was taken to reunite the four surviving Englands for the first time in many years. Welsh Pony was cosmetically restored to a green livery in order to match Linda's tender (which had originally come from Welsh Pony). The wooden framed tender was returned to Princess which had also been cosmetically restored for the event. 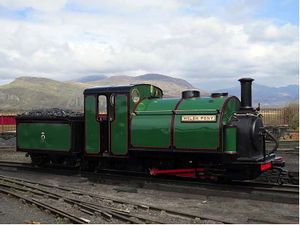 Welsh Pony 2013, prior to dismantling for restoration. The tender is from Linda.

Following an initiative from FRCo. GM Paul Lewin in Steam Railway magazine in 2010, much interest was raised in restoring the sole surviving Large England loco to working order.

The first step was to draw up and agree a conservation plan for the locomotive prior to carrying out an in-depth look at the loco to ascertain exactly what can be reused and to estimate the cost of its restoration. In 2013 the FR Co. agreed this report and to the restoration of the locomotive to working order (including the building of a new tender). Dismantling of the locomotive for assessment and restoration started on 4th May 2014. As expected, the boiler required replacement but it was also found that the frames and cylinders were too corroded to be re-used.

One of the first jobs completed was repairing the saddle tank; new plate was let in at the base and secured using traditional riveting techniques. The saddle tank then appeared at some events as focal point for the continued fundraising. New frameplates were procured and new cylinders cast from the pattern previously used for Prince and Palmerston's new cylinders. These were assembled by the end 2015. Boiler work commenced in 2016 after the completion of Merddin Emrys's overhaul, meanwhile work to construct and fit out the frames continued with a mix of new and original parts. By autumn 2017 the boiler was complete and in the frames, which were back on the original wheels. The new tender was also complete. It is a replica of the original iron frame England tenders, complete with vacuum brake gear. The coal space has been shortened in order to provide space for seats (as in Prince's tender). At the same time the cab was having sympathetic repairs done to the platework. The cab roof was replaced but the rest was left largely intact, including a few 'heritage' dents. A number of heritage cab fittings have come to light including token and document holders that are hoped to be reused.

When first outshopped it will appear in all over unlined plum livery (the same colour as the Victorian carriages). Once testing is complete it will be repainted back into green livery as a tribute to the late Allan Garraway, who made the first contribution to the rebuild appeal. It is expected that the locomotive will return to steam in 2020, making its first appearance at a special launch event in June.

A dedicated microsite has been provided at http://festrail.co.uk/welshpony. Donations can be made via the Ffestiniog Railway Society charity at http://uk.virginmoneygiving.com/charity-web/charity/finalCharityHomepage.action?charityId=1003330

The song The Fairlie Duplex Engine by the Spinners references Welsh Pony in trials against Little Wonder.