History of and anecdotes about the various volunteers' hostels that have existed on the FR since 1954.

This was the rather derogatory name given to one of the earliest hostels (although it hardly justified this description, being more in the nature of a 'squat') - the small room at the end of the old locomotive shed with a door opening out onto the platform at Boston Lodge Halt. It had originally been a weighhouse for slate trains headed for the wharves around Portmadoc harbour, hence the large window on the side away from the current main line. It fell out of use for its original purpose at some time in the late 19th century and became an oil store for the locomotive shed (the floor was still well soaked in oil in the 1950s). In 1955 it saw brief use as a 'refreshment room' from which bottles of 'Portmadoc fire water' (the products of R M Jones & Sons, Snowdon View Mineral Water Works - the Portmadoc 'pop' manufacturers) were sold to passengers during the layover whilst the chain shunt took place. Its name arose from the antics of an early group of volunteers - the 'Wierdies' (a sort of proto-hippie group) which consisted of males and females that were difficult for an outsider to tell apart. This difficulty did not apparently apply to the Wierdies themselves who were credited with very energetic and relaxed sexual practices...

In the 1950s and '60s there was no running water or electricity in this 'accommodation'. Residents used camping lamps and cooked on camping stoves that they brought themselves. Water was collected in collapsible canvas buckets (also self-supplied) from the tap in the erecting shop. A similar canvas bowl was used for ablutions (most people didn't bathe more often than once a week in those days...) and washing-up. There was a fireplace, fed by coal brought in tin buckets from the works yard. Beds were 'mattresses' on the floor - these had started life as cushions in the 1st class bug-boxes, stored in the adjacent Old Locomotive Shed. However, around 1960 it was discovered that these were stuffed with horse hair and they disappeared soon afterwards - rumour was that the horsehair was used to make trimmings for axleboxes. From then onwards, until the room was properly renovated, users brought ground sheets and Lilos (inflatable mattresses or air beds)in addition to the standard sleeping bag. The nearest toilets were a seriously insalubrious privy by the steps to No.1 Boston Lodge or the even worse one in the lean-to in the now-demolished Long Shed, so it didn't do to get 'caught short' during the night! Sometime around 1960 the company provided a kerosene stove for cooking purposes which was a vast improvement - until the Wierdies decided to try running it on diesel or TVO. The resultant explosion wrecked the stove and caused the room to be redecorated.

This was the name given to the two interconnected rooms which used to exist in Harbour Station to the right of the small door leading from the car park, the first room is currently a marketing store and the second is now part of the catering and buffet car stores. The name derived from the dark red wall paper of the further room, which was decorated with a 'Doric arch' design. The two rooms had originally been part of the Station Master's accommodation and the further room had the luxury of a fireplace with a mantle piece which was usually adorned with 'decorations' in the form of pyramids of empty 'Long Life' or 'McEwans IPA' beer cans. The fireplace was an essential feature in winter as both rooms were very draughty. A corridor ran through part of what is now the gent's toilet to a kitchen, used by long-term residents as a laundry (shirts, etc, washed in buckets, boy scout style) as well as a cooking and eating area by those not amongst the elite fed by May Jones' famous establishment in Britannia Terrace. The cooking arrangements were fairly basic and often highly unhygenic - the cooking implement of choice was the frying pan and it seemed to be a point of honour amongst some of the younger male users to make the fat in the pan last several weeks... Every so often the patience of one of the FR ladies (usually Alice Boughey or Pat Ward) would snap and the kitchen would be 'blitzed' with Teepol and disinfectant - after which there would be mutterings from the young males about female interference and the cycle would repeat itself...

This was a large elevated storage cupboard in the western wall of the kitchen described above. It was reached by a ladder and was just big enough for a single 'bed' - a mattress and sleeping bag. During the season in the early to mid 1960s it was usually occupied by David Bascombe, usually known as 'Nana', who worked with the motive power department at Boston Lodge for much of this period.

Beyond the Harbour Station kitchen, before the alterations forced on the building by the building of the access road to South Snowdon Wharf, was a small enclosed yard. Off to the left (between the yard and the platform) was a moderately large, self-contained room that had originally contained the ovens for heating the naphthalene-filled foot-warmers which were routinely issued to first class passengers on winter trains during the Victorian era. The ovens were still in situ when the railway was reopened in 1955 and it is unfortunate that they were not preserved as they were a rare survival even in the 1950s. The Ward Room name arose because it was Pat & Geoff Ward who rebuilt the room to make it fit for occupation, including the destruction of the furnace (on the instructions of Allan Garraway) during the winter of 1961/62. They occupied the room during the summers of the early 1960s.

At the other end of the station was the Ladies Waiting Room, equipped with a long leather upholtered seat and a fireplace. There was also a WC (access 1d, but there was a key for those in the know). The wards used this as their 'hostel' during the winter they rebuilt the Porters' Room, installing a bed, a small chest and an electric heater that Allan Garraway used to switch on late on Friday before they were due for the weekend.

The door of the Ladies is now blocked, but it can still be discerned; the space is part of the present (2006) shop.

The old Glanypwll crossing house/engine shed barracks, converted into a 4 bedroom hostel with large sitting/dining area, kitchen and two bathrooms. Apathy and neglect has meant it has fallen into disrepair - few have stayed there over the last five years. Despite the plaster falling off the walls and general tiredness, it remains a fun place to stay with a big working party, if only for the extensive collection of Discovery Channel, Fred Dibnah and Tom Sharpe videos. This Hostel is now no more.

I, heritagejim, stayed there in the mid 70s (either 76 or 77) when Dave Payne and Sandra were living there. It was in a pretty bad way then. I arrived, dumped my gear and went out almost immediately during which period it rained. When I returned most things in my room had been moved and there were buckets etc placed in strategic places to catch drips from the roof - I don't think it ever got any better! 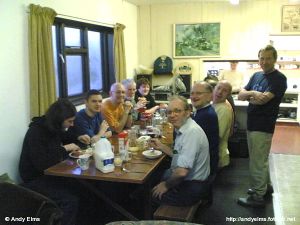 The White Rose Group at breakfast in Penrhyn Hostel

The old Penrhyndeudraeth station building has been converted into the Society's groups premier accommodation. Decent size kitchen, lounge area and several cosy bunk-bedrooms make it a lot more attractive than the cramped Minffordd Hostel. The dining table seats 14 and has been the scene of many fierce discussions and high stakes games of Monopoly. The hostel log is fascinating in its own right. Most famous residents were The Belgian Girl Guides, still spoken about in awe to this day. Refurbished in early 1990s with the pitched roof extended over the flat roofed ablutions block.

An ex-M6 construction office located in the north west of Minffordd Yard in the late 1970s. In latter years Room 1 was the wardens room, with the remaining 5 rooms accommodating 24. In latter years a new roof skin was fitted removing the need for the famous internal guttering. As with the Mark II hostel anecdotes are kept quite quiet to protect the innocent!!

As this is by far the largest, newest, and most active hostel, anecdotes are still kept quite quiet to protect the innocent!! Financed, designed and built over a period by the Company and the Society, it is run by a resident warden with support from the Society. Further Information on the hostel can be found at Minffordd Hostel . This is the main hostel used by regular volunteers.

The WHRS has purchased the house adjacent to Dinas station yard and converted into a three room hostel.[1] 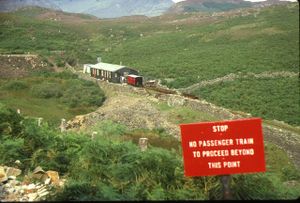 A view of Tunnel Mess, the Deviation Hostel, seen from Gelliwiog. Passenger stock was rarely seen there. Van 9, later 59, the ex-GWR cattle wagon conversion, was probably there with supplies for the hostel.

Between 1965 and 1973 a large room in Dduallt Manor was used as accommodation for Deviationists by kind permission of the owner, Colonel Andrew Campbell. It had its own private siding (see Campbell's Platform) but was not accessible to road vehicles, and was generally known as Dduallt Mess.

As work progressed northwards there was a need for more accommodation closer to the work and Tunnel Mess was opened in a temporary structure actually on the old main line at the south end of Old Moelwyn Tunnel. It too had no road access but did have its own railway, The Original Line Above Dduallt To The Old Moelwyn Tunnel. It operated from 1967 until about 1978.