Ronald G. Jarvis, B.Sc., C.Eng., F.I.Mech.E., was a British locomotive engineer by trade, and a carriage restorer in retirement. Having trained at Derby he went on to have long career on the mainline railways, working on a variety of well known locomotive types. As well as a professional railwayman, he was an enthusiast and photographer and visited the Festiniog Railway in the 1930s.

After the war he purchased a second home in north Wales from were he carried out the restorations of several of the FR's Victorian carriages. He is particularly well remembered for his rebuilds of the Small Birminghams - or Bug Boxes - the railways original carriages of 1863.

Ron died in 1994 but his legacy lives on in the form of both the carriages he rebuilt, and those built later using materials he had prepared.

He was born 5 November 1911 in Harpenden, Hertfordshire and was educated at St George's School there. All his life he had a keen interest in railways, and particularly in locomotives. As a ten year old boy he cycled alone from his Harpenden home to Welwyn Station and back in the hope of seeing one of Gresley's new GN Pacifics, and to his delight he saw both of them roar by!

In 1928 he was accepted by the LMS as an engineering apprentice at Derby Locomotive works, and at his first attempt gained the Director's Prize. Jarvis was a premium apprentice at Derby Works under H. G. Ivatt, alongside Oliver Bulleid. He studied at Derby Technical College on day release and at evening classes, and gained a London University external degree with 2nd class honours when he was still only 20.

Following his apprenticeship, he spent short periods in the Derby Locomotive Drawing Office and then the Research Department, before being moved in 1936 to the CME, London HQ at Euston, in a development team under Tommy Hornbuckle, then designing a 3-car diesel unit. The CME, William Stanier, noted his obvious abilities. With a colleague, Ron shared technical responsibility for the novel three-car articulated diesel train during its trials and later service on the Oxford-Cambridge line in 1938 before its transfer to the Midland Main line. During one of the turnrounds at Cambridge he was able to photograph the Stirling Single GNR No.1 on its vintage train.

During the Second World War, with Fred Soden of Crewe Works, he was sent to Turkey to oversee the construction of the TCDD 45151 Class (LMS Stanier Class 8 2-8-0's / 8Fs), at Sivas works in Turkey. Ron needed to improvise several modifications for the climate there.

He returned to the UK in 1942, and marriage to May Baldock ensued; they had a daughter, Rosemary, sometime later.

He was subsequently involved in Stanier's mission to India to look at production improvements for war work. After the war, Egypt was his next assignment to see which loaned locomotives could be returned to the UK and the LMS.

With nationalisation, he moved to London, and the Marylebone HQ of the Railway Executive, where he introduced a number of improvements to locomotive design, and was able to indulge in some early railway preservation.

He progressed through a number of positions within the LMS and later the nationalised industry. Under the reshuffle organised by R A Riddles, in 1950, he was appointed Chief Technical Assistant to the CME of the Southern Region, at Brighton, replacing Bulleid.

He became Chief Technical Assistant at Derby (he represented the LMR on the committee which investigated the output from the Interchange trials of 1948 and represented Southern Region (Brighton Works) on the team which designed British Railways Standard locomotives. His input was greatest on the Class 4 2-6-4T and Class 4 4-6-0 designs, although he was involved in designing the 9F and the Franco-Costi boiler variant, which was abandoned when it failed to produce the expected economies.

From 1956, the Merchant Navy and West Country/Battle of Britain classes of his predecessor Bulleid were rebuilt to a design set out by Jarvis, removing eccentricities that had plagued the maintenance of these locomotives. The object was to convert an interesting design into a reliable one at the least cost; in this, his work was successful.

Ron played a major part in the development of the smaller electro-diesel locos, now termed Class 73, which proved to be an outstanding asset for the Region. Again, he managed to out-manoeuvre HQ, which intended originally that they should be merely motorised baggage cars!

Returning to Derby, in charge of the Locomotive & Carriage Wagon Drawing Offices, testing and other associated work. The Railway Technical Centre was created in 1967, bringing together at Derby almost all the design staff from the other centres. Ron was appointed Locomotive Design Engineer in charge of the locomotive drawing office. His major challenge there was the satisfactory development of the power cars for the prototype HST whose successors so revolutionised passenger services over many of the main routes.

On the more personal side, He was deeply involved in the preservation of railway records, especially those at Derby, and with his brother Jim, throughout his life was a keen photographer. 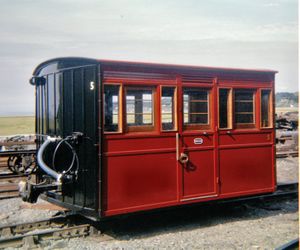 He had never lost interest in other railways but always retained his delight in his first love, the Festiniog Railway. He still had the letter from Robert Evans giving him permission to photograph at Boston Lodge in 1930: one of his photographs shows Taliesin without its boiler in the Glan y Mor yard. His next request to photograph was in 1946 when Evans wrote back to say that, as the line had closed; it would not be possible to visit.

He first took a practical interest in the FR in 1957 and in 1959/60 he began the restoration at his home of carriage 16. This was in a sad state, having been left out of doors during the war and after. Those who were there can testify to Ron's extraordinary efforts.

In 1963 Ron and May bought and rebuilt two derelict cottages at Bodawen and used one as their Portmadoc home, spending alternate weekends working on the FR - or feeding the worker. As a more permanent base on his retirement, they purchased a 19th Century coach house at Llanbedr Dyffryn Ardudwy near Harlech, having it refurbished into a fine dwelling. A main attraction there, was the spacious former stabling which was converted into a workshop which could house two full sized Small Birminghams, vulgarly known as 'bug-boxes' - or 1863 stock, as Ron always more correctly called them - which he began to restore.

The complete body for carriage 5 was finished in 1983 and moved to Boston Lodge to join its underframe. He continued with work on components for several others, but progress slowed as he and his wife spent more time on local activities. The then carriage 6 was built as a first-class carriage in 1864 but was converted to an open observation car by the 1880s. Allan Garraway and Ron decided to rebuild it to its original first-class form. All the pieces of the open conversion were kept, so it was possible to build a new open carriage too; after Ron's time, this emerged as carriage 1.

Ron was a curly-roofed van enthusiast, but he had not been able to get beyond building an O-scale model of it: his O-scale models of all manner of railway stock are a delight.

At the age of 80, he received the FR President's Award in recognition of his services in rebuilding vintage carriages. He also treasures a receipted bill, with Allan Garraway's writing at the bottom: 'Ref: restoration of carriage No.5. All our grateful thanks ... £42.48.'

Subsequently his deteriorating health prevented his completion of further Small Birminghams, so their components and his stock of timber were moved to Boston Lodge in 1991 where others completed further vehicles. In all, beginning from and inspired by Ron's work, ten of these curious little vehicles from the 1860s have been rebuilt; this remains one of the outstanding - though understated - feats of railway restoration.

He died at the Llandudno General Hospital on 2nd September 1994 in his 83rd year after suffering from deteriorating health for several years, and was buried at Llanbedr Dyffryn Ardudwy.

The Chackfield biography is recommended for more detailed reading.