Carriage 16 is one of the first pair of bogie coaches built for the FR.

In late 1872 the bodies of two coaches were delivered from the firm of Brown, Marshalls and Co. Ltd., of Adderley Park, Birmingham, the details being their own, but with an overall general design by Charles Easton Spooner. Whilst not the world's first, they were the first revenue-earning bogie coaches in the British Isles, and are now the oldest in existence. The other carriage of the pair was 15.

Due to the length and fact they would only be supported at the end of the carriage, the wrought iron frames were made considerably stronger than previously used. This was also in order to take the strain of a train passing through reverse curves of short radius, and to haul large rakes of empty wagons. The bogie centres and bolsters were of oak sandwiched between cross girders.

The two vehicles, when originally constructed, had seven compartments, which accommodated three classes. One description had the carriages as having a 1st class compartment upholstered in blue material holding six passengers in the centre, flanked on one side by a 2nd class fitted out in plain cloth holding eight persons and with 3rd class seating for 24 on wooden seats with no intermediate partitions. At each end of the carriage, where the floor is raised over the bogies, there are Luggage/Third compartments in which the seats were originally removable and arranged lengthways. Droplight windows were provided in both the end of the carriage and the side windows, but there were no fixed lights on either side of them. As built they had removable benches across the side doors and entry was generally made from end balconies, there being a gangway across the ends of these carriages with suitable steps each side. They seated three per side and were described as being "for servants and baggage". To suit the end compartments to their primary role, in both vehicles, there was a wide door in each side; but in order to use it, the seats had to be removed.

Over the years they have operated the seating arrangements have been varied slightly. At some point the end compartments were changed to "ordinary" third class compartments with transverse seats, this involved the wide side doors being substituted for ones of standard width and the boarding up of the gangway door; it appears this work was done at some point before or around 1918 as close inspection of iBase 3223 and 3225 appear to show the doors now standard width with only a single large panel to either side. Assuming both were done within a relatively similar time period, both 15 and 16 were converted before 1924 as one appears in iBase 3214 with Taliesin. Additionally one of the second class compartments was replaced by a first class coupé and the other downgraded to third.

The coupé compartment had at one time a table for solicitors to work upon during their journey. It is unique on the FR and may have been installed when a second-class compartment was altered. Various stories are told of it. This compartment was reputedly used by David Lloyd George when, as a solicitor, he travelled between Port and Blaenau. 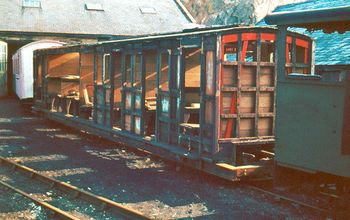 Next on the restoration list, Carriage 16 is seen here in the yard at Boston Lodge, being towed out by Moelwyn. This sort of carriage condition is what the early preservationists had to contend with.

Carriage 16 was the last of the old company bogie coaches to be restored, entering service for the first time in preservation in 1969. At this time it was painted in the new standard livery of cherry red and temporarily ran on a pair of NWNGR bogies. The initial restoration was largely the work of one man, Ron Jarvis. In 1959/60 Ron Jarvis began the restoration of the carriage at his home. This was in a sad state, having been left out of doors during the war and after. Those of us who were there can testify to Ron's extraordinary efforts. During the rebuild Ron installed into the Coupé compartment some lavish marquetry, originally from Pullman Car Eunice.

Following a period running in the then standard all over red livery, Carriage 16 was repaired and repainted in a livery of cream and plum to accompany Carriage 15 in the Vintage train set which ran during the late 1980s and early 1990s.

The carriage has been restored in the Colonel Stephens heritage livery as part of the railway's vintage The 1930's Train.

The carriage, which has been restored to its 1930s appearance, of green livery with red ends is very different from the highly ornate 15. Both coaches are virtually identical but now show the development from Victorian carriage to inter-war period, with many detail changes. The 1st Class Coupé compartment has retained the Pullman marquetry installed by Ron Jarvis in the original rebuild. This was deliberately left as a tribute to Ron's work. The mouldings on top of the marquetry are from the original (or very early rebuild). It is possible to see the fixing points for the luggage rack brackets.

Carriage No. 16 was launched at Harbour Station, on Monday 1st October 2001. There were still some minor details to finish, with it finally entering service on a trustees special train to Tan-y-Bwlch on the 4th.

Carriage 15, which has been restored to its ornate Victorian appearance, is very different from the more austere 16. Both coaches are virtually identical but now show the development from Victorian coach to inter-war period, with many detail changes. Both carriages now operate as part of the normal passenger carrying fleet. 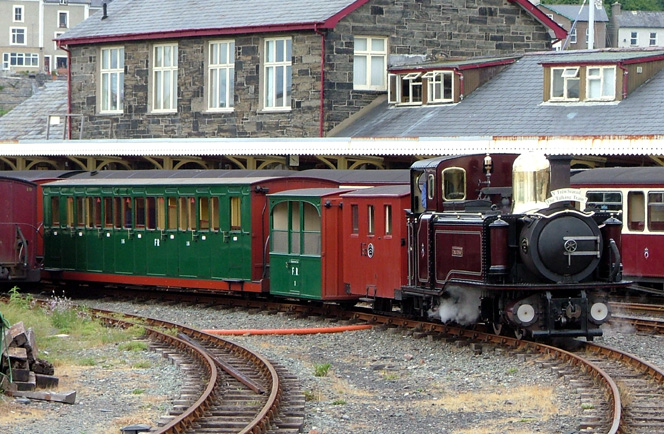 Carriage 16 behind Carriage 1, Carriage 8 and Taliesin