Carriage 2 is one of the FR's original carriages from 1864.

Carriage 2 was built by Brown, Marshall & Co of Adderley Park Birmingham. It is a single compartment closed carriage with knifeboard seating and a first class capacity of six each side. It is believed to have been part of the first batch of narrow gauge passenger coaches built in the world for public service (along with Nos. 3, 4, 5 and 11), to designs assumed to have been made by C.E. Spooner.

Sometime before 1887 it was rebuilt and officially described as an observation car, with it being open above the waist.

The carriage survived in its observation car form into the preservation era.

Restored for use on the reopened FR in 1958, it was renumbered 6 to avoid confusion with the then Van 2. For a time in the 60s this carriage ran with the doors from one of the porthole bug boxes, probably number 12, which had collapsed revealing The Flying Bench.

The carriage was subsequently rebuilt out of its observation car form and back into its original enclosed form as a very comfortable first class, twelve seater knifeboard saloon with leather upholstered seats, varnished panels, and a single door plus four drop light windows on each side. Many of the removed observation car components were used in the construction of the replica Carriage 1.

The rebuild was started as a labour of love by Ron Jarvis in his workshop at Llanbedr. He built a rolling chassis and much of the body framing before ill health stopped further work. The carriage was returned to Boston Lodge and the woodwork was completed by Peter Magnay as a contract job. Ron Jarvis was able to have a ride in the rebuilt vehicle (probably his last visit to the FR). The carriage was returned to service on July 19th 1992 in a Royal Purple/off white livery; this was because paint of these colours had been discovered on the original pieces in places not exposed to light.

By 1995 it was fitted with a vacuum brake cylinder to provide additional braking on vintage trains and to enable four wheel coaches to travel in the traditional position next to the engine on an up train. Norman Bond believes it was returned to service in 1992 with working brakes. It is the only one of the original 1865 carriages to have had a brake fitted - the others remain through piped only.

With the renumbering of the 1990s it reverted to its original identity of Carriage 2 when it was repainted. The Carriage currently carries the Victorian livery for use in The 1870's Train. Originally seating 12 people (6 each side), it is now rated at 10. It is currently semi-permanently coupled to carriage 5. 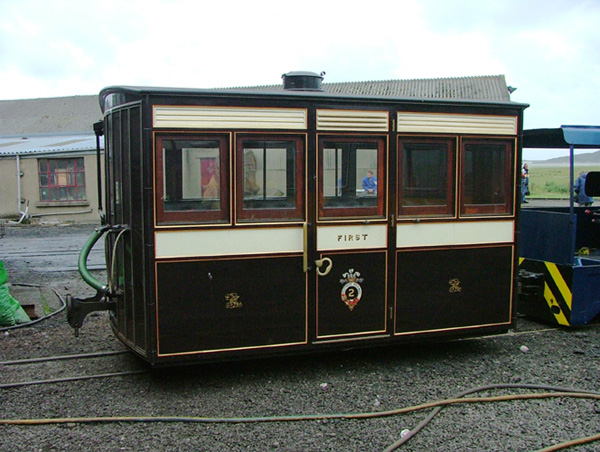 On display at Boston Lodge