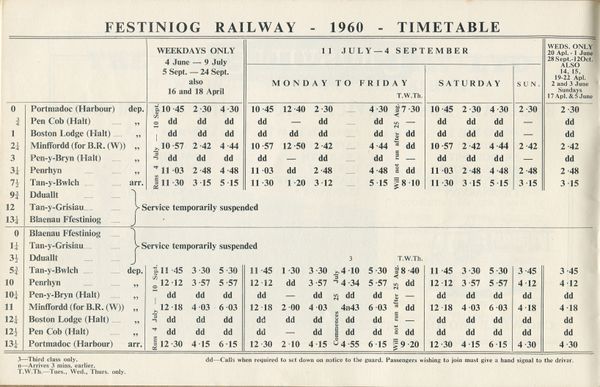 The first day of service for 1960 was Maundy Thursday, 14th April, from whence a single trip to Tan-y-Bwlch ran daily at 1430 until Friday 22nd April (with an additional trip at 1630 on Easter Saturday, 16th April, and Easter Monday, 18th April. After this, the single 1430 trip ran on Wednesdays only through to the end of May.

A daily two trip service (1430 & 1630) ran for the month of June, Sundays excepted (although Whit Sunday, 5th June, did have a single trip service). From Monday 4th July onwards, this became a three-trip service, with the addition of a morning 1045 departure from Portmadoc on Mondays to Saturdays. The following week saw the addition of a 1240 train, Mondays to Fridays, and an evening 1930 service on Tuesdays to Thursdays. A single trip Sunday service was added from Sunday 17th July.

From Monday 25th July through until Friday 2nd September, the Flying Flea commenced operation, departing Portmadoc at 1445 on Mondays to Fridays. This was the only timetabled occasion where two separate trains were scheduled, with 1960's maximum service - six departures from Portmadoc - running Tuesdays to Thursdays. The final 1930 departure was on Thursday 25th August, with both the Flying Flea and the 1240 departure ceasing a week later (Friday 2nd September).

Things then slowed down at pace - Sunday 4th September was the final day of Sunday service, whilst Saturday 10th September was the final morning departure. Things thus returned to a two-trip service Mondays to Saturdays for two weeks up to Saturday 24th September. From then, three Wednesdays saw the single trip (1430) service, before the year's final day of service on Wednesday 12th October 1960.