From Festipedia, hosted by the FR Heritage Group
(Redirected from William Williams (1836))
Jump to navigation Jump to search 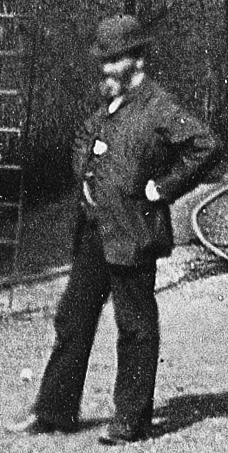 William Williams was born around 1835 in Tremadoc. Around 1837/8 he and his parents moved to Hawarden in Flintshire where his father (also William) was an engineer. By 1851 William (snr) was working for the FR and the family were living at 3, Penycob which is now probably 2, Boston Lodge. William jnr (15) and his brother Owen (13) were apprentice fitters at the works. Information in the FR archives suggests William started working for the FR in 1847. His grandfather was Richard Williams, a blacksmith from Tremadoc. It is thought he worked for William Madocks on the construction of Tremadoc.

By 1861 William snr had died and William jnr had married Elizabeth Parry (in 1857). It is believed they then lived in what is now No.3, Boston Lodge. At that time they had two daughters and William's mother was living with them. In total they had 5 children. Among them, John R who trained as a Civil Engineer but went to India to work with G.P.Spooner and ended his career in the locomotive department of the East Bengal Railway in 1917, and William G. who worked for the FR as a fitter and then Loco Foreman.

For period after the arrival of the first locos in 1863 he is recorded as being trialled as a driver in October 1863 and as being the driver of Little Wonder in 1870. By 1872 he was foreman of the locomotive department, and in about 1875 became the Works Manager for the whole of Boston Lodge. In Scribners account of the line in 1878 he again was called on to drive Little Wonder to the rescue of The Princess. Therefore during the period from 1870 to 1881 he may have combined driving with being a fitter (and later foreman/Works Manager).

In 1869, he completed the construction of Topsy, a working model steam locomotive of 3.125 inch gauge, for CE Spooner's railway at Bron-y-Garth. Later records suggest he may have been helped by Percy, Charles' son.

In February 1881 was appointed Locomotive Superintendant, suceeding CES, with his salary being increased by 10s (50p) per week to £180 per year.

From his notes, it was recorded that he recommended R&W Hawthorn Leslie & Co. Ltd of Leeds as his preferred supplier for the new boiler for Princess in 1895, but the Vulcan works won the contract.

Dismissed in June 1909 (62 years service!) with a "pension" of £1 per week terminable at any time by the Board. He was asked to vacate his lodgings at 3,Boston Lodge at the same time and moved to live in New St., Portmadoc.

He died in December 1915, and an application by his widow, for a continuance on the "pension" was denied

He was succeeded as Loco Superintendant by Robert Williams (no relation)

The period leading up to his dismissal coincided with Board room shuffles and resignations, dismissal of a number of Boston Lodge employees (including his son William.G.Williams) and a report on costs produced externally by C. D. Phillips. Relations across the Cob with Frederick Vaughan were strained. William Williams carried what became a grudge against the FR to his grave. He was buried at Penrhyndeudraeth Holy Trinity church and his family had to arrange his for cortege to take a route avoiding Boston Lodge, lest the ill-will followed him to his grave.

Which translates to:- From the noise of the day and its thunder - he flew, Without delay feebly, To the circle of bards in a lighter world, Meirion remembers the grave.