The Deviation sites were initially numbered starting with 1. It was then realised that two other sites nearer Porthmadog were needed so these were numbered 0 and -1. Site 0 involved widening the Dduallt station site so that a passing loop could be installed.

FRM37 (Summer 1967) states "Further up, level with the old points, another new location, Site 0, has been started, again to accommodate the new track, all proceeds going to Site 1 tip."

The original loop at this station had long since become just a simple siding with its points at the south end, but not far south enough for the length of loop now required. The siding was also close to the running line. Behind it was an attractive row of trees which were too good to lose. It was decided that the loop would go behind the trees, which meant cutting into the hillside. This would give a good wide island platform with the trees and space for a building on it. The only drawback was that 3" under the turf was solid slate. Removal of this became Site 0.

Personal reminiscence from George Cash - I was there in April 1968. I was not a Deviationist myself (they were a different breed from us ordinary FR volunteers) but I was put on this job as with the reopening to Dduallt imminent all hands were required to get it workable. Although a lot of rock had been shifted along Site 0 and there was a temporary track, it still needed lowering and widening along most of its length before the loop could be completed. Nevertheless we were called off the job on the morning of Saturday 6th to help lay an additional 2 lengths of track on the main line at the north end to accommodate the first public train into Dduallt that afternoon, and it was a great satisfaction to see the Earl of Meirioneth (before its boxy rebuild) occupy that track just an hour or so later. This and the next few trains were worked push-and-pull with an engine at each end. There was just a short siding (which later became the south end of the loop) and this was not initially usable, hence the push-pull working. Later in that season a spare engine would wait in the siding to take trains out, and the engine which had brought the train in would go in the siding to await the next train. This continued until the full loop was available. Beside the siding points (in Site -1 cutting) stood the Old No 1 Brake Van (withdrawn because of its rotten underframe) up on blocks, doing duty as Dduallt Signal Box, housing the staff instrument. A SR pattern enamelled totem on the side of the van proclaimed this to be 'Clapham Junction'. 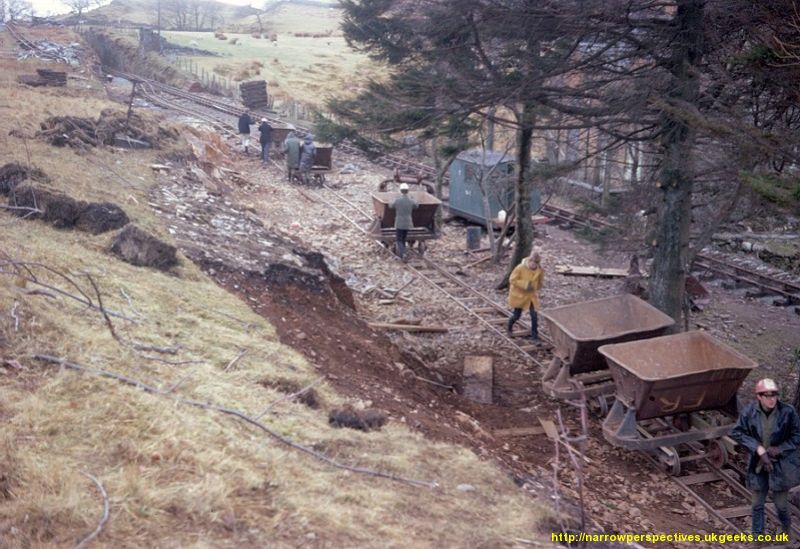 Widening the station site. Site -1 in the distance. Work in the foreground is Site 0. Note the body of old No 1 van, not yet in its final resting place by the siding points