From Festipedia, hosted by the FR Heritage Group
(Redirected from Coed Y Bleiddiau Halt)
Jump to navigation Jump to search

The railway crosses a small side valley on a curved, dry-stone, embankment adjacent to the cottage and the extra width on the valley side of the curve is evidence of the curve having been eased at some time.

The cottage which was built around 1863 for the use of the Superintendent of the Line. It was later rented to a number of private tenants including Sir Granville Bantock and Harry St. John Bridger Philby. Beginning in 2014 the building was restored and as of 2018 is available as a holiday rental through the Landmark Trust. 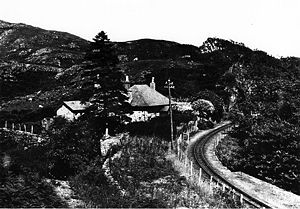 Coed y Bleddiau from the west, showing the line of the railway and the alignment of an earlier, probably pre-1869, embankment. At various times this area of level ground has been cultivated as a kitchen garden for the cottage.

The alignment of the Railway has been modified at the bridge to increase the radius of the curve by moving the line outward on an impressive embankment. It is not known exactly when this was done, but it was probably before 1869 when improvements were made to make locomotive working easier. It may have been done when line-straightening and relaying in heavier rail was in progress in the 1850s, when locomotives were anticipated - if the 1854 date on Tan y Bwlch underbridge and the reported date of 1852 for Short Tunnel may be relied on, it may be that the work at Coed y Bleiddiau dates from about the same time. The 1869 plans for the doubling of the line clearly show the wider curve in the formation.

The cottage at Coed y Bleiddiau was built around 1863 on land bought from Colonel Tottenham, who also owned land around Dduallt and required the establishment of the station there. At one time it was known as "Bridge House". The cottage was built for the use of the then Superintendent of Line, T. Henry Hovendon and, as a consequence, was sometimes known as Ty Hovendon during the 19th century. The reason for choosing such a remote location is not recorded. The contract to build two cottages (XD97/18245) was dated 23rd November 1863. The contract specified cottages at Coedybliddia and at the Tunnel. The cost was £340 and issued to John M Evans.

There was an earlier cottage (now known as Old Coed y Bleiddiau) about 200 yards further up the line. Census records show this to have been occupied as early as 1841 but it could be older than that. O/S maps of around 1880 show this cottage as Coed y Bleiddiau Uchaf.

An article in FR Magazine 28, p26, contains the reminiscences of Henry Hovendon, a descendant of the Superintendent, who could remember living at the cottage and the arrangements for the delivery of shopping from the guards of passing trains.

In 1901 there was a derailment nearby, serious enough to warrant an investigation and report to the Board of Trade by one of their Railway Inspectors. 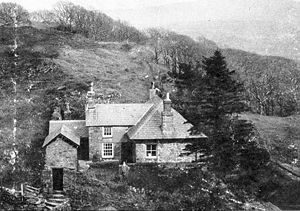 Coed y Bleiddiau from the hillside to the west, c1930

After the Hovendons the cottage was rented to a variety of tenants who were not employed by the railway. The first, from around May 1913, was a J. W. Sudbury, from Birmingham and in June 1918 the lease was transferred to a W. Wellings. He applied to purchase the property outright two months later, but this was refused.

For some years from the late 1920s until 1937 Sir Granville Bantock (the composer and Conductor of the City of Birmingham Symphony Orchestra - CBSO) and his family rented the house. The reminiscences of his daughter, Myrnha, appear in FR Heritage Group Journal 34 (Summer 1993) and it is interesting to note that Lady Bantock employed the time honoured method of obtaining provisions, holding out a basket complete with list and money to the guard of the up train and receiving the full basket from the returning down train. Their son Hamilton Bantock, who took photographs of the line, was involved with MI6 and may have introduced the next tenant.

Sir Granville was obviously very attached to the area around Coed y Bleiddiau; after his death in 1946 he was cremated and, at his request, the family scattered his ashes on the slopes of the Moelwyns, behind the cottage.

Sir Granville was followed as tenant, from 1937, by Harry St. John Bridger Philby (aka Haji Abdullah), a leading British fascist, Arabist, and father of the KGB agent, Kim Philby. St. John Philby had been a friend of William Joyce ('Lord Haw Haw') and local legend holds that Joyce stayed at Coed y Bleiddiau at least twice in the late 1930s and referred to the area in his wartime broadcasts.[1] Both claims have, however, been shown to have no basis in fact according to research conducted at the Imperial War Museum by the BBC for the 1991 programme ‘Germany Calling’ and by both of Joyce’s biographers.

The most recent tenants of the cottage were Mr & Mrs Johnson who lived there from 1951 until 2006, when failing health made living in such a remote location impractical.

Nearby a willow sculpture of a wolf was planted in 2010 - it is alleged that the last wolf in Wales was killed here in Tudor times.[2] 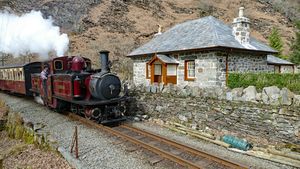 In April 2014, an agreement was reached between the FR Co. and the Landmark Trust, which has an portfolio of unusual properties that it rents out as holiday homes. Coed y Bleddiau will be restored by the Landmark Trust and they will control access to the property. As in the past, guests will use the railway to access the house.[3] Contractors took over the site in August 2014 and the railway assisted with the renovation by running works trains to deliver construction materials and water. By November 2017 the renovation was well under way with the scaffolding removed from the exterior and the new roof and refurbished doors and windows clearly visible. Progress was being made on the interior and various fittings and furniture were delivered by a special train consisting of Lilla, Wagon 63, the Crane Wagon, Carriage 10 and Van 1.[4] During the restoration interesting discoveries included an original slate milepost from horse-worked days that had been used as lintel and the word 'Hovenden' scratched into the glass of a window by one of the early occupants.[5]

The cottage was complete and hosting its first visitors in April 2018. The completed cottage is fitted out with traditional furniture and, instead of a TV and wifi, visitors can find a bookshelf well stocked with titles about the railway and the local area.[6]