The Ffestiniog Railway has a number of open bogie coal wagons (also known as Bocoals) of War Department or Robert Hudson design (68, 69). In standard form they have wooden bodies and floor with drop doors on either side. They are mounted on War Department type bogies. In FR service most were fitted with a handbrake working on the bottom end bogie only. As built the WD wagons had handbrakes on each bogie, but those at Leighton Buzzard had lost all brakes by the late 1950s. The bogie and underframe design is shared with the Hudson Toastracks.

Most have now been converted to other purposes, withdrawn or transferred to other users. Nowadays the survivors may be seen carrying almost anything except coal, which is now normally carried in ex-SAR B Wagons. 71 and 72 are used around Boston Lodge carrying parts of locos under repair. 63 and 68 are often used as part of the S & T department works trains.

The railway also has a number of wagons in a similar style but of all steel construction. These are known as Locoals. 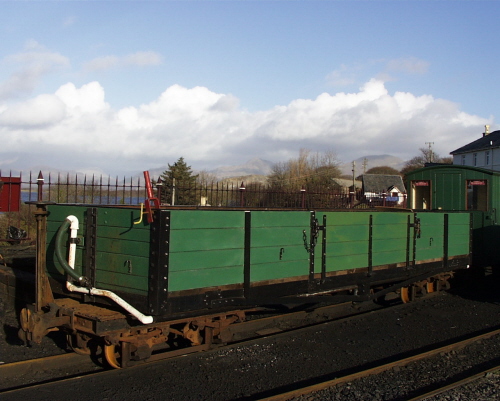 Wagon 63, un-numbered and awaiting a sign writer after receiving a new wooden body in March 2004 Megabash at Boston Lodge

More information on no 63 was given by John Dobson in an E-Group posting. He wrote:

"Some weeks ago there was a brief discussion of my theory that the ex-Smiths Crisps No.63 - the one with the centre drop doors - was a rebuild of a WDLR van.

It is known that Smiths had a number of ex-WDLR ambulance vans, but that they tended to overturn on poor track and were dumped out of use as a result. It is entirely possible that, when the system required additional/replacement open wagons, some of these vans were converted to open wagons using ironwork from 'E' wagons (the bogie well wagons with centre-drop doors in the sides). It would have been easy to cut new planks of appropriate length for the sides.

Incidentally, the diagram of the ambulance vans in Davies's 'Light Railways of the First World War' shows the sides as coming down outside the frames, so the frames would be narrower than the 6'0" shown as the width (6' 4.5" over the sliding doors)

I think 63 is a converted ambulance van."

Nocton Estates had twelve Ambulance vans, used for transporting sacks of potatoes. Each van had sliding doors. As the sacks jammed against the doors the estate office started by changing the doors to hinged outwards. The ultimate reconfiguration from covered van to open wagon is well within the changes made by the estate workshops.

Old FR no 4, Flat, formerly one of the Hudson Toastracks. Later became one of the Fuel Tank Wagons, then Carriage 42.

Old FR no 5. Flat, formerly carrying concrete batching plant, now dismantled. Ownership transferred & now part of the Moseley Railway Trust museum collection at Apedale, restored as WD wagon. This would have been the underframe from either a WD type D wagon, or one of the Hudson Toastracks.

Old FR no 6, Flat, formerly one of the Hudson Toastracks. Used as a camera platform for a BBC TV live Outside Broadcast on 13 July 1960. It was propelled in front of Prince to get views up the line and back at the loco. It was fitted with temporary decking and scaffold handrails, and a pedestal to support a Marconi Mark 3 camera. Below the temporary decking the original floor was visible but only between where the seats had been[1][2]. This became Carriage 38 in 1971.

Old FR no 7. Flat, formerly used for weedkiller spraying. From evidence of some holes on the underframe this was one of the Hudson Toastracks (underframes identical except for some holes present on the coach and not on the wagon). Withdrawn from weedkilling 1974 due to corrosion of underframe[3]. Ownership transferred & now part of the Moseley Railway Trust museum collection at Apedale in Staffordshire, where it has been restored and runs as WHR Carriage 40.

Braked bogie open. Ex RAF Lichfield (Alrewas) 1963, Hudson design, not WD type, probably originally at RAF Fauld where there were many of this type, said to be used only at this depot[4]. From 1963 ran on German bogies from one of the Brookes wagons but is now on WD type bogies. The German bogies still exist, at Minffordd. Though un-numbered, "its Hudson waggon number is 68. Bo-coals and locoals are the same thing with all steel construction. (CGM) "

Rebuilt 2011-13 with new welded underframe and new floor, and through vacuum pipe. Now painted grey in the style of an FR WD wagon seen at Beddgelert in the 1930s.

Braked bogie open. Ex RAF Lichfield (Alrewas) 1963, Hudson design, not WD type, probably originally at RAF Fauld. Bogies WD type. A photo in FRM 45 p5 shows this wagon in May 1969 on its original Hudson-type bogies, rather like skip frames. In addition to its FR number the number 253 can be made out, presumably its RAF number. It may also be seen in iBase 823, before it received its FR number.

WD type D bogie open ex LBLR 1969, overhauled by FRS EAG and delivered to the FR in 1971, and almost immediately became one of the Fuel Tank Wagons. Tanks removed by 2015 and wagon transferred to the Mosley Railway Trust at Apedale, Staffs, now restored as WD D wagon. 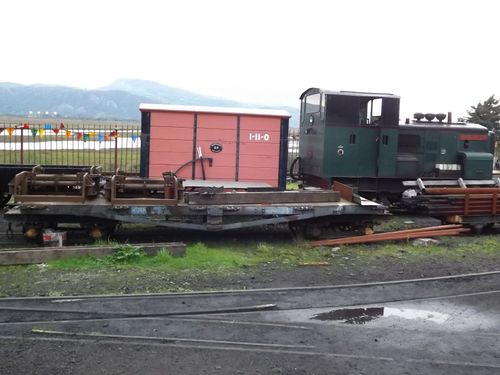 This is one of the four WD type D open wagons acquired by the East Anglian Group of the FRS in 1969 from Leighton Buzzard. These were among eight bought by Joseph Arnold & Sons for use on the Leighton Buzzard Lt Railway, which had no wagons of its own, all being supplied by the quarry firms. As received by EAG they incorporated some wheels marked 'Robert Hudson'. When these parts may have been built into them seems now impossible to determine. Pedr Jarvis recalls that, when these wagons were bought from Arnolds the late Joe Arnold, the vendor, described them as having been supplied new in 1923 by Gloucester Railway Carriage & Wagon Co., one of several companies that built wagons to the type D design for the WD during the Great War. Maybe they were built in anticipation of further WD orders, but were left on the makers' hands, new and unused.

Subsequent research by Gareth Roberts of Moseley Railway Trust has established that there are constructional differences between wagons in this batch. There are various theories as to how Gloucester RC&W Co. may have supplied wagons incorporating parts from other makers. 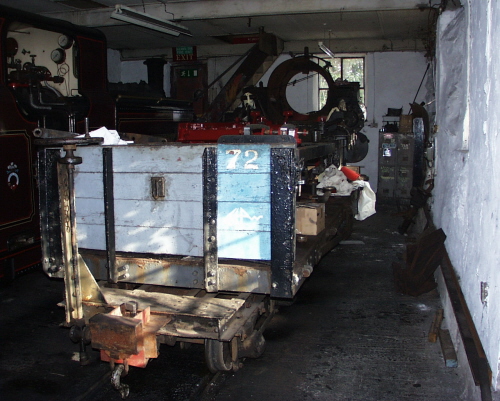 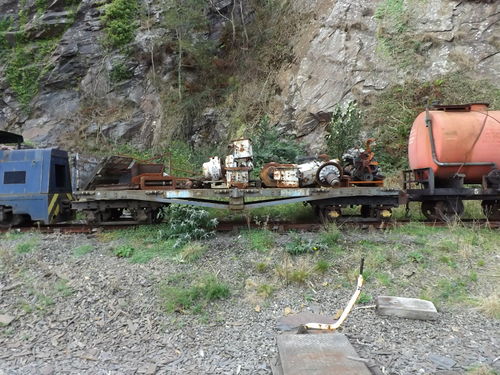 With thanks to research by Dr. Peter Jarvis and Adrian Gray