Lilla is a medium-sized quarry Hunslet, originally built for the Cilgwyn Quarry. Later used at Penrhyn, she was privately preserved before moving to the Ffestiniog Railway in the 1990s.

Lilla was built by the Hunslet Engine Company in 1891 (number 554). She was built for the Cilgwyn Slate Co. Quarry at Nantlle. From 1923, Cilgwyn slates were despatched by a link with the Fron Quarry which provided access to the Bryngwyn Incline Drum Head and so down the incline and on via the Welsh Highland Railway to Dinas Junction.

Lilla was bought by the Penrhyn Quarry in 1928. Her move from Cilgwyn to Penrhyn in 1928 was via the route through Fron and over the WHR ending with a transfer on to an LMS standard gauge wagon from Dinas to Port Penrhyn where she was unloaded on 21st May 1928. After some a thorough overhaul Lilla was set to work in the quarries. Although of a reasonable size, and apparently bought as a standby for work on the Penrhyn mainline, Lilla spent most her working life at Penrhyn as a quarry engine, reputedly on the Red Lion Level. Later Penrhyn modifications included removing the sandboxes from the running plate and relocating the whistle from the top of the cab to the front.

Lilla was in the works on the 11th September 1934 and the "gauge reduced to 23 in". The implication that the loco had been running at Penrhyn with the wheels set to too wide a gauge probably says something about the quarry track work! After various spells in and out of the works Lilla was failed a boiler test in 1955 and was laid up.[1] 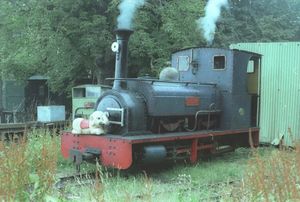 Lilla at the Knebworth Park and Winter Green Railway in Hertfordshire

Bernard Latham bought Lilla in 1963 and restored her in his garden. A number of parts were missing, including the connecting rods which had been sold to the FR for use on Prince. Latham was able to obtain Prince's rods for Lilla (later the original rods were returned). Other parts were tracked down at Penrhyn, the name and works plates were recovered from the museum at Towyn and spares were bought at the Dinorwic auction. During the rebuild the original Cilgwyn green livery was discovered beneath the works plates.[1]

Restoration complete, in 1972, Mr. Latham moved her to the Knebworth Park and Winter Green Railway in the grounds of Knebworth House in Hertfordshire. She ran there until 1987, when she was moved again, this time to the new line at Kew Bridge Steam Museum. Lilla proved too large for Kew Bridge, so in 1991 she moved again, to the Bala Lake Railway. Still under Mr. Latham's ownership, she ran at Bala, but proved too large and heavy for regular use on railway.[2]

Lilla came to the FR in 1993 for the Hunslet Hundred event and subsequently stayed on the railway. In 1997 Lilla was bought by a consortium of members (the Lilla Locomotive Group) through the Festiniog Railway Trust, though technically she belongs to the FRCo. She has remained on the FR ever since, making occasional appearances elsewhere.

After a rebuild Lilla was lined out in Penrhyn Quarry livery to match sister Linda for the 1996 vintage weekend. New pistons and rings along with a mechanical lubricator were fitted in winter 1998/99 and in 2000 the loco was fitted with a concealed vacuum ejector to allow occasional passenger workings, for instance on shuttle services.

In October 2004 Lilla's original boiler was condemned, so her chassis underwent maintenance while a new all welded boiler was being designed and constructed by Boston Lodge, taking the serial number BLB1 (The original boiler is considered by the National Railway Museum at York as being one of the oldest and most original Hunslet boilers still in existence). Lilla returned to steam and was first used with Britomart and visiting engine Jerry M over May Day Bank Holiday 2008. The new boiler is pressed at a modest 140psi but may be increased now that her axleboxes, hornblocks and frame have been attended to (2014). The boiler is good for a higher pressure.

In 2009, Lilla spent some time from May at the National Trust's Penrhyn Castle near Bangor and after this travelled to England to attend the Tyseley Loco Works 'Open Weekend' on 27-28 June in Birmingham. The trip to Tyseley was repeated for the open day there on 26-27 June 2010, attended with Britomart. Lilla travelled with Britomart to Dinas Junction on the WHR in connection with Superpower Weekend in September 2011 and followed this with a visit to the Lynton & Barnstaple Railway for a gala.

In the autumn of 2014 she went into Boston Lodge Works for an overdue bottom end overhaul. She was dismantled in Kids' Week by a most professional group of four teenagers with some adult supervision. Her cylinders have been rebored and her axleboxes and hornblocks have been fettled. Her crankpins were worn and bent; they have been replaced. Many other small repairs have been done, including mending some ugly holes in her footplate occasioned during previous repairs (not at FR!). She has a new chimney - the old one was slightly too tall and hit the engine shed roof. We are unsure whether it was indeed her own chimney; it was in the latter stages of decrepitude, with more clay than iron in the cap.

In 2015 she returned to service with a new stainless steel smokebox and a classical Hunslet chimney - with help from Statfold Barn who hold many of the original drawings - and proves far more powerful than she was. We think she could haul an entire service train across the Cob, but of course her water capacity limits any further trials of strength. Her original injectors were sent away for repair and have not been returned in a satisfactory condition. In 2017 Lilla was repainted into Cilgwyn green livery, complete with dummy wooden sandboxes to represent its early days.

Lilla was withdrawn for overhaul in 2018, after a final appearance on the 10th November. The boiler certificate didn't expire until March 2019, but the team behind the overhaul wanted to use the winter months to get a head start on the work.[3] Lilla was complete and in steam again in time to work some photocharters in November 2019. In addition to the boiler work it was fitted with two new injectors to the original Hunslet pattern.[4]

Lilla has been found very useful on the Slate Shunt experiences and on occasional shuttle trains. Lilla has also been known to deputise for the diesel shunters when the temptation is too much. She has raised her own operating funds by offering drives to the public during the main season and on special events. She is most useful at at Megabashes and Gigabashes for ferrying garden materials and at Kids' Week for all manner of excitements even to beach parties and barbecues; it is a rare Kid who has not ridden her by the end of the week. In short, she is a model of how a little locomotive can be useful around the house.