Over the years of their operation, the Ffestiniog Railway's England Engines have used a number of different tenders. Several distinct styles of tender were built or rebuilt in the 19th Century but the design elements became standardised in the early years of the 20th century.

The England locomotives are not believed to have been supplied with tenders by the manufacturer, and it is likely the tenders were built at Boston Lodge. The article in Engineering on October 4th 1867 states, "The small quantity of coal required by each engine is carried on a four wheel truck attached to it". Initially the tenders were probably built on the same type of chassis as the railway's goods waggons. Additional tenders for Welsh Pony and Little Giant are recorded as being constructed at Boston Lodge between 1868 and 1870.

According to the notes left by William Williams (Locomotive Superintendent from 1881 to 1909 and employee since the 1840s), the tenders were initially separately numbered from the locomotives. By the late 1890s the tender numbers appeared to match the locomotives on most occasions. As an example, when Palmerston went to the Vale of Rheidol, it had a metal-framed tender (ie originally No 1 or No 2) but this was numbered 4.

There were three tenders by 30th June 1864, four by June 1869 and five by 1870; this number remained until 1924 when an accident reduced the number back to four. Those four tenders have survived to the present day and have been joined by a fifth built in 2017 for the rebuilt Welsh Pony.

Visually, the tenders fall into four basic forms of construction. These are presented here in chronological order of their building or rebuilding. Not all tender types resulted from new construction; the later styles were arrived at by a process of rebuilding the earlier ones. 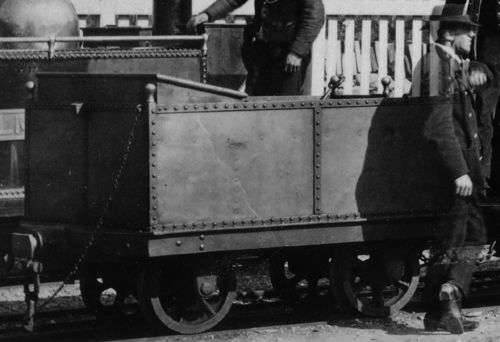 This are the earliest tenders, built for the first four England Engines. They had a square utilitarian appearance, similar to an ordinary wagon. Side and rear panels formed by two, rivetted panels. The top of the tender sides are straight. Front of tender has four brass knobs, the rear has two brass knobs at the corners and a lamp bracket in the middle. A toolbox with sloping lid was built into the rear of the tender. The frames were wooden and both unsprung and unbraked. It is likely they were painted in a plain colour like the goods wagons.[1] The earliest photograph of this type of tender dates from c1870 and the latest from c1878 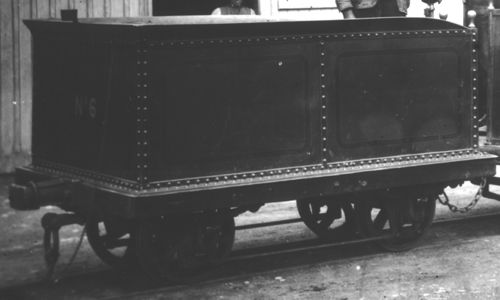 Probably built for Little Giant and Welsh Pony, numbers 5 and 6 had a more stylish design than the earlier examples and were painted to match the locomotives. These tenders have side panels with a flared top, tapered down at the locomotive end. The side are formed of two panels rivetted together. There were four brass knobs at the front. The frames were wooden with a tie bar between the axleboxes. The suspension was sprung using leaf springs and the tender was unbraked. The earliest picture is c1871 and the latest is in the mid 1880s. These tenders were rebuilt as type 4 with a single side sheet: Number 6 in 1885 and number 5 in 1891. 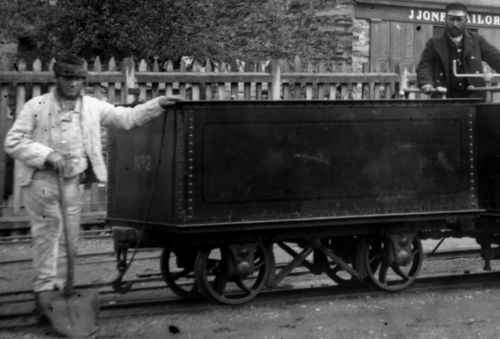 Two tenders of this type - numbered 1 and 2 - were built, probably as replacements for type 1 tenders. The Williams books quote tender number 2 as being built 28/4/80 - "No.2 , A new tender for shunting engine with brake fitted on". The bodies were larger and had high straight sides (without a flared top) and only two brass knobs at the front. They had metal frames and were originally fitted with unsprung axleboxes. They were hand braked initially , with the mechanism on the inside of the driver's side of the tender (which never seems to have appeared in photographs!). Photographs show that the brakes, axleboxes and couplings are similar to those found on the 3 ton slate waggons.

These tenders later gained sprung axleboxes and vacuum brakes. Number 2 had these modifications carried out in 1893 and it can be assumed number 1 followed suit in 1895 with the emergence of Princess in its final form. They were later further rebuilt with new bodywork bringing them into type 4.

There were subtle differences between the two type 3 tenders - number 1 had disc wheels and number 2 had spoked wheels in 1887. The earliest photograph is c1880 the latest is c1898. 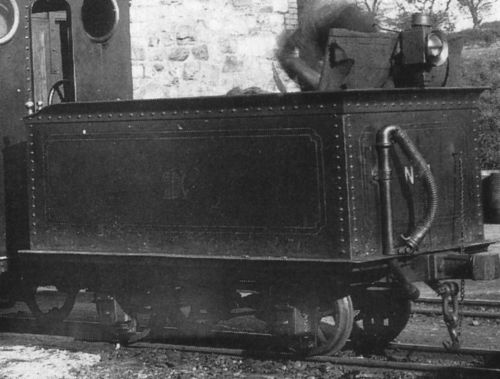 A metal framed example of a type 4 tender. 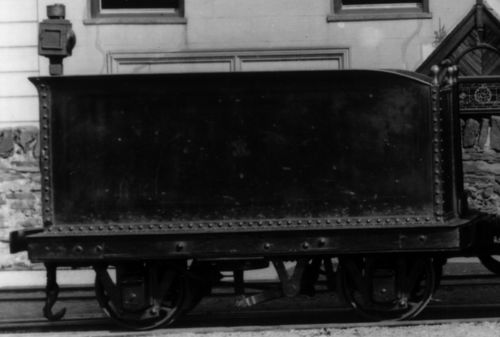 A wooden framed example of a type 4 tender.

This type represents the final development of tender design. The sides had flared tops similar to type 2 but the side panels were a single sheet. There were four brass knobs at the front. In their final form these tenders had sprung axleboxes utilising coil springs and were fitted with vacuum brakes.

The earliest tenders of this type - numbers 3, 5 and 6 - had wooden frames. Tender 6 was the first, rebuilt from type 2 in March 1885. The earliest photograph is 1887. Tenders 3 and 6 certainly had coil springs by March 1891, but photographs suggest this was done before 1887 (number 6) and 1888 (number 3). The change for tender No 5, from leaf spring suspension to coil suspension, probably happened when it was rebuilt from type 2 in the October 1891. The wooden framed tenders were unbraked until they were fitted with vacuum brakes 1893. 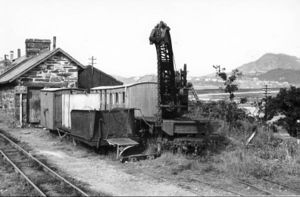 Wrecked tender at Boston Lodge in 1935.

Tenders 1 and 2 were rebuilt from type 3 tenders in the early 20th century and had metal frames.

Recognising the different tenders can be done by looking at the rivet patterns and by the vacuum fittings at the rear - there are subtle differences. Also the tender, mostly associated with Palmerston from the 1920s (which for a time became waggon 38) had large metal patches on the sides.

One of the wooden framed tenders was wrecked in accident in August 1924 when Welsh Pony collided with remains of Taliesin in the locomotive shed.[2] The remains of this tender existed outside the back of the old locomotive shed into the 1950s. The other four tenders survive to the present day. Their post-revival use and rebuilding is described below.

Most of the England locomotives were vacuum braked in 1893 (Welsh Pony-May, Little Giant-June, Palmerston-Aug and Prince-October). Princess was done during the overhaul that ended in March 1895. A drawing exists from 1893, shown below, of the proposed arrangement for Palmerston's tender.

Of interest is that Palmerson is shown with a Type 4 wooden tender (no photos of the loco exist for this time, but the Williams books record this as being tender No.3) and that the conversion included the braking of the tender (ie it wasn't thought of later). If you look in the later photographs, below, of Welsh Pony's tender (ex Princess), the arrangement is almost exactly the same as this diagram. 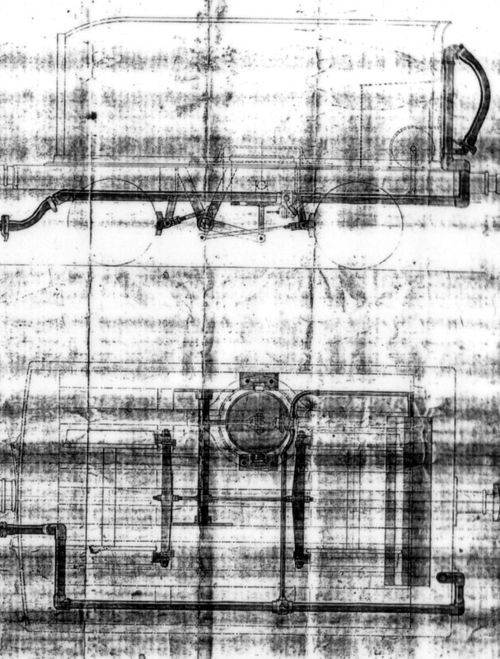 Tenders in the revival era[edit source]

The new owners in the 1950s decided against having braked tenders. Thus Prince appeared with an unbraked tender in 1956 (having run the 1955 season with the tender braked). The next tender to be used was the wooden framed one then known as waggon 38 (ex Palmerston). This was used behind Linda and then Blanche before dedicated tenders were provided for these locomotives. Linda acquired Welsh Pony's tender (metal framed) whilst Blanche was given a brand new tender. Waggon 38 was subsequently sold to go with Palmerston in 1974 and has since been restored close to original condition, but without brakes. It remains in use with Palmerston.

The final wooden framed tender, that was behind Princess at closure in 1946, was left unaltered and remained with Princess until 1985, when it was coupled behind Welsh Pony on a plinth at Porthmadog. The condition of the frame deteriorated over the years and when the locomotive was finally removed from the plinth in 2004 the tender was taken to Boston Lodge for restoration by volunteers led by Andrew Lance. A new oak frame was inserted and the original metalwork restored, including the brakegear. In 2013 this tender was cosmetically restored to be coupled behind Princess again.

Both of the original metal framed tenders have been rebuilt in the modern era. Linda's tender (ex-Welsh Pony) has been widened and has an integral water tank installed because of the lower amount of water the Ladies carry in their saddle tanks compared with the Englands. When Prince was converted to oil firing in 1980 the tender was considerably rebuilt with the chassis strengthened and the shell widened*. Two water tanks and an oil tank were inserted. The oil tank had a steam heating facility for the waste oil that was being burned at the time. This arrangement was removed in 1995 and replaced with a single oil tank round 3 sides of the tender that both spread the weight and gave seating room in the tender. A large wooden toolbox was added for extra storage (and camouflage!). This was altered again in 2012 for coal firing and the tender was provided with a bunker and storage facilities.

A new metal frame tender has been built for Welsh Pony. It is based on the original condition metal frame tenders but with an internal layout similar to that on Prince. It will feature interchangeable buffer and chopper couplings.

The following is the allocation of tenders as best as can be ascertained from photographs:-

The external body dimensions of the currently extant tenders are: