Little Giant was a steam locomotive built for the Festiniog Railway in 1867. Part of the second batch of locomotives built for the line, it continued in use until the late 1920s and was subsequently scrapped.

Little Giant was the name of a class of sailing ship built at Porthmadog for the slate trade.[1]

Little Giant was the sixth and last of the single engines built by George England & Co (works number 235) for the FR and the second of the "large Englands" after Welsh Pony. It was delivered in 1867 and became No. 6 in the FR fleet. Details visible in the works photo, which were subsequently changed, include the slide bar arrangement, the placement of the whistle in the cab and the use of wooden brake blocks. As supplied, the loco did not have central buffers which had to be added subsequently. 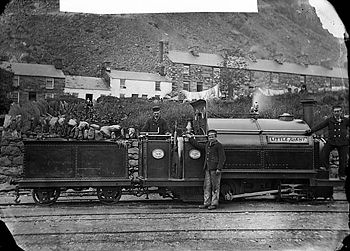 The loco was retubed in January 1874 and cast iron brake blocks were fitted in 1875. It had a thorough overhaul from July 1875 to January 1876 with most of the motion worked on. It had two mishaps in 1877, in January and October, but the damage was slight. In August 1877 it double headed with Taliesin on its first train. The water tank was patched in 1878, and the loco had another mishap on Christmas Eve that year, again with only minor damage. The firebox was replaced in 1879 (154 copper stays and 19 studs used) and a new set of steel tubes were put in. In April 1880 two whistles were put on and in May 1882 phosphor bronze nameplates replaced the previous enamel ones. The steel tubes gave problems and after 10 were replaced in October, all of the tubes were replaced with brass tubes in December 1882. In May 1883 it ran into some slate wagons at Minffordd, but only needed a new front buffer. In June that year new cylinders were put on. In June 1884 the cylinder joints were remade and two patches put on the outer firebox. In 1886 the firebox was giving trouble with a crack in one corner. The tank was patched and weights fixed under the tank. 1887 saw a new boiler being ordered from Adamsons (£162). The loco was withdrawn on 21st October for rebuilding. The tubes of the old boiler were put in Princess.

It re-emerged in January 1888, with a new steel boiler (with brass tubes and steel ferrules), new smokebox, chimney, front footplate and lubricator. The whistles were moved back to the weatherboard. It ran in this style until the following winter when a new tank and cab were fitted. Also "a new kind of sand box fitted on & worked by water from footplate". The frames were found to be cracked and in May 1890 new steel ones were fitted. New tyres were fitted and new bearing springs, made from old Little Wonder springs. The firebox started giving trouble in February 1892 with leaks from the front tubeplate and fire door ring. 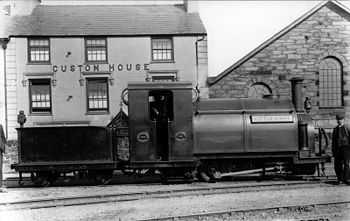 The vacuum brake was fitted in June 1893 and in October 1893 a new 'D' shaped smokebox was put on. Eleven tubes were replaced in 1895 and another set of new tyres fitted. 1897 and 1898 saw more firebox work and 8 tubes replaced by old ones from Merddin Emrys. The leading axle was replaced also.The engine was retubed in 1899, but two of these brass tubes burst only 13 months later, so it was again retubed in March 1901. The loco struggled on, and by 1903 the boiler pressure had been reduced to 120lbs and its firebox was twice worked on in that year. 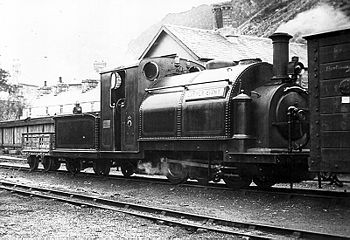 In 1904 it was rebuilt, with a new mild steel boiler from the Vulcan foundry. Most of the locomotive was new except the tank and the wheel centres. The frames were replaced, the cab had a new front, a new smokebox was fitted, the chimney was made shorter "to clear bridge", new cylinders and pistons were fitted and the wheels were retyred. The tank was raised 2" on oak beams and the carrier frames were lengthened. Two new square brass plates were fitted on the rear panels of the cab, commemorating the rebuild. It was tested on 28th October 1904 and then painted. William Williams recorded this rebuild as a success in 1905 saying the cylinders were much superior to the old ones. For two years it was reliable, then tubes needed referruling in October 1906 and March 1907. At this time the blast pipe was closed down to 2⅛". In April 2 tubes burst at Tan-y-Grisiau and then another in June.He then called the engine"a stupid steamer" due to a cylinder being "porous". Therefore it was retubed again in July after only 2½ years (it was found it had been given thinner tubes in 1904 which had contributed to their failure) The condition of the stays and firebox was being monitored and the blast pipe was opened up again in June 1908. However its steaming cannot have been good as in 1909 it is noted that "the exhaust pipe taken off to be trued with the chimney". In August 1911 it had a new smokebox front and then in December the balance weights in the tank were removed and new cast iron balance weights were fitted to the front footplate. By June 1913 eight plugs had to be put in the boiler to "stop leakage, smoke box end above cylinders". By September that year it had to be stripped down and a plate put on the boiler. 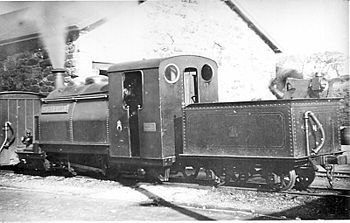 By 1923 it had a steel framed tender. This is the old 'Tender No.1' and subsequently has ended up behind Prince. In the engineering report of that year the boiler pressure is noted as being down to 140lbs. The description is "Engine fair, boiler defective". It was dismantled for a boiler inspection in November 1924.

In March 1929 the boiler had its tubes removed and sold for scrap. The boiler barrel was cut shorter and the boiler was put into Palmerston in 1933 and, according to Boyd, the tender ended up behind Welsh Pony. This tender was the other steel framed tender - old 'Tender No.2' - which now belongs to Linda. 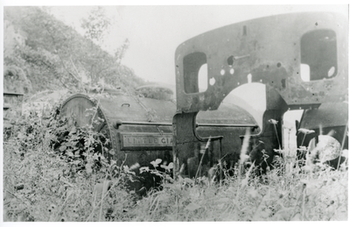 The cab of this locomotive was in Glan y mor yard until at least 1954. The coupling rods survive, the connecting rods and a part of the buffer beam were used in the rebuilding of Moelwyn in the 1950s. The 1898 leading axle is now under Welsh Pony. The nameplates were found buried in Glan y Mor Yard in 1961.[2]