The new signal box at Harbour Station has a 12 lever Westinghouse Signals Style “L” lever-frame. This is a small portion of the old 155 lever Darlington South frame, commissioned in 1939, de-commissioned in 1972. A 12 lever portion of the frame was kindly donated to the FR by Peter Burke in 2012, having been in store for longer than it had originally been in use! It was commissioned as part of the Harbour Station remodelling project in March 2014. 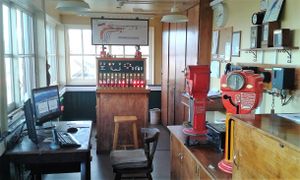 The Harbour Station lever-frame controls all points and signals, except the handpoints in the yard and the advance starting signal (which is controlled by a train-staff operated drawer-lock). It also does not directly control the point and signals at the Cross Town Rail Link end of the WHR platform/loop – these are locally controlled from a push-button ground-frame (“Spooner’s Ground-Frame”), which is released from the lever-frame.

The Westinghouse style L frame has miniature levers, and was derived from the earlier style K miniature lever frame. The major innovation with the style L frame was that it has no mechanical interlocking between the levers, as on the style K, and as would usually be found on a lever-frame. With the style L frame, all the locking is done electrically. This made the L frame much easier to configure. It was an important step in the development of interlocking technology, a transition between mechanically-interlocked levers and electrically-interlocked push-button panels. Further information on the Style K and L frames can be found here

Each lever on an L frame was intended to have two electro-magnets, as shown on the diagram below, both of which have to be energised to allow the lever to be operated. One magnet was intended for the lever-to-lever locking (the ‘lock magnet’ – providing the equivalent of the traditional mechanical interlocking between levers), and the other for track-circuit and other electrical controls (the ‘selection magnet’). For simplicity, the Harbour Station frame uses only one electro-magnet per lever to do both functions, halving the number of magnets needed. 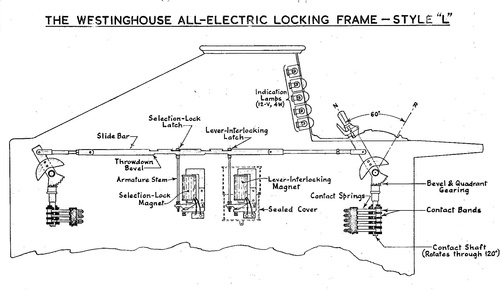 Each lever operates a number of rotary contacts, arranged vertically in banks on both the front and back of the frame. On small frames not needing many contacts, it was usual to only provide contacts on the front of the frame. 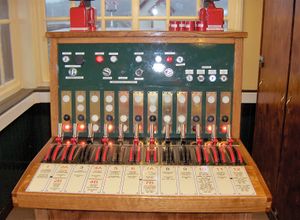 Each lever has an associated ‘free’ indication, and also indications to show the state of the points or signals controlled by that lever. On most L frames, the ‘free’ light only shows the state of the track-circuit and other ‘selection’ controls – the signalman is expected to know the lever-lever locking. In order to make the indications more helpful to train-crew operating the frame when no signalman is on duty, the ‘free’ indications on the Porthmadog frame have been designed to show if both the selection controls and the lever-lever locking are free.

A number of other miscellaneous controls and indications are provided on the indication panel, such as the “manned/unmanned” switch for closing the signalbox overnight, a switch for controlling the headshunt indicator, and various controls on Britannia Bridge level-crossing. Two bells are provided above the frame, to warn of the arrival of FR and WHR trains. 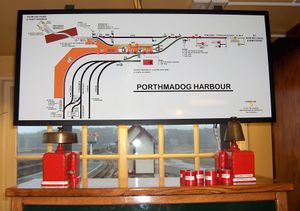 The illuminated signalbox diagram (above the frame) shows the track layout, and the state of the track-circuits (that indicate the positions of the trains). It was donated by Mark Colton and David Hazzledine, who used to produce similar signalbox diagrams for Network Rail.

The lever frame was made up from various sections of the old Darlington South frame:

Different parts coming from different sections of the frame didn’t matter, as an L frame is made up of standard, interchangeable components, like a kind of big Meccano set. It can be configured for different applications by assembling the right configurations of components in the appropriate places. For example, slide bars come in standard configurations to suit point and signal levers, and contacts likewise come in standard configurations. The frame as received had 5 point and 7 signal levers, whereas we needed 4 point and 8 signal levers, so some replacement components were kindly provided by the Bluebell Railway (who have installed an L frame in their Kingscote signalbox).

The lever-frame had to be completely stripped down to its basic components, each component fully cleaned and refurbished to ‘as-new’ condition, and then everything re-assembled in the correct configuration for its new role. The work was started in mid 2012 by Alan Skellern, once a member of the FR’s S&T staff, but following retirement working on this project as a volunteer. Alan concentrated on the mechanical components, and was joined by Peter Matthews who concentrated on the electrical components. For the contact banks alone, there were over 2,000 copper, brass and bakelite components each needing to be thoroughly cleaned and polished. Following Alan’s unfortunate demise in early 2013, at a point when he had dismantled the frame down to its basic structure and started refurbishing the components, Peter took over work on the mechanical components too.

Once everything had been refurbished, in Sept 2013 the FR’s S&T team then installed the basic frame structure into its new home in the newly-built signalbox. A fully assembled L frame is heavy, weighing between 1,200 and 1,400 lbs (i.e. over half a ton, or 600 kg), depending on the number of components used. And this does not include the weight of the cabinet. The frame is therefore mounted on two sturdy steel girders running under the floor.

The 2.4m internal width of the signalbox was dictated by the limited space available between the track and the wave-wall, giving a long, thin signalbox. Due to the depth of the frame, and the need for access to all four sides for maintenance, it was necessary to unusually position the frame sideways-on within the signalbox. Access is also available to the underneath of the frame via a trap door in the floor.

Once the frame structure had been installed, work then began on re-attaching all the refurbished components in their new configuration. This work proceeded remarkably quickly, a testament to Westinghouse Signal’s standard of manufacturing. Once the frame had been fully re-assembled, each lock and each contact then had to be checked and adjusted for correct operation, including setting each individual contact to the correct contact pressure. Wiring of the frame also commenced, integrating the frame into the rest of the signalling scheme. The wooden casing for the frame was made by David Gunn.

The frame was commissioned as part of the full Harbour Station remodelling project on 15th March 2014, less than two years after work on the frame had first started.