Only slightly less important than signals controlling entry to crossing loops are signals which control entry to a single line section. These can be made so that they can only be released by the Train Staff for the section. This has the advantage that it makes it less likely that by mistake a train will enter a section without the staff. If the signals are electrically operated they can be returned to danger by a train operating a treadle or track circuit. This protects a train from another one entering a section behind it. (Josey 2012)

Currently the F&WHR use a variety of different starting signals including semaphores, colour lights and stop boards. 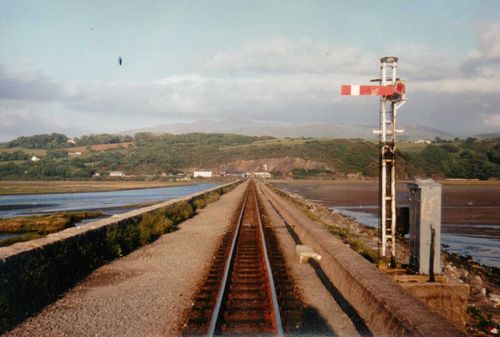 The signal allowing trains to enter the Portmadoc - Minffordd section at Portmadoc in June 1978.
The home signal can be seen further out in the OFF position
Photo Mark Temple

In 1970 the FR was improving its signaling to allow the intensive train service of those days to operate more safely. The Ministry of Transport had just approved a scheme for Portmadoc. The section from Portmadoc has always been the one which sees the highest number of movements because as well as trains there are the light engine movements to and from Boston Lodge. So that the longest trains could be shunted at Portmadoc when a train was approaching, an Up Advance Signal was put on the cob with sufficient distance from the king points. A new Down Home signal was placed another 200 yards further onto the cob so that shunting could be carried out when an approaching train was in the section. They were both semaphore signals. The starter signal was motor worked and the home signal was mechanically worked by wire. At Portmadoc the train staff had to be placed in a drawer-lock to clear the starter signal. As the train passed the signal there was a treadle which the train struck and returned the starter signal to danger. The posts were made of two double-head FR rails welded together at Boston Lodge, and the various fittings were a mixture of SR and GWR - the post caps were cast by students in Swansea. The signals were Great Northern summersault type (centre balanced being the technical term) apparently sourced by Allan Garraway from Holloway and made by McKenzie & Holland and along with the shunts were electrically lit. Because the platform at Harbour is at right angles to the Cob, station staff and the guard could not see when the Starting Signal was OFF, so a 'miniature' electrical Banner Repeating Signal was installed on the Goods Shed wall. This Banner Signal showed OFF when the points in the main line were set for the platform road. It is still being used today by the new signalling.

In both the Control Office and the Booking Office was a switch that could place and maintain the signal at Danger. This was provided for emergency use only.

Audible warnings were given in both the Booking Office and for the Catering Staff whenever a Down train struck the treadle just beyond the Up Advance Signal.

The story of the apparatus case, in the above photograph by the Up Starting signal, was originally a Westinghouse Brake and Signal Company Intermediate Block Signal case from Ibsworth on the Pompey Direct line from Guildford to Havant can be found in Josey 2012b.

This signalling scheme served the railway well for over 40 years, greatly facilitating the arrival of the Welsh Highland Railway into Harbour Station. The two somersault signals operated from 1971, the home from 2nd June and the Up Advance signal 28th July. In 2013 they were replaced as part of the resignalling of Harbour Station which was commissioned in 2014. A train staff operated drawer-lock in the new signal box is still used to release the new starting signal for FR trains leaving Porthmadog. 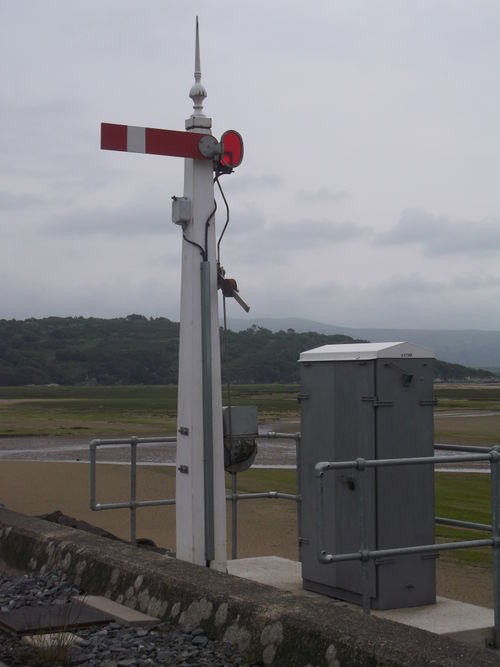