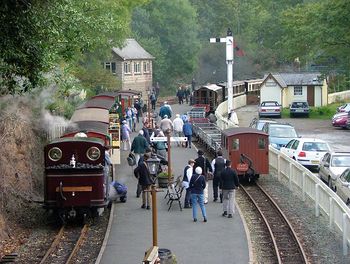 In the signalling system used by the old FR company each intermediate staff stage station had a centrally located, double-armed, semaphore signal that served as a 'block' Signal. The semaphores acted as a combined stop and starter signal, although they did not denote the actual stopping position, they denoted 'Stop and Wait for Train Staff or Train Staff Ticket'; this also applied to the pair of double arm semaphores at the Dinas Junction at Glanypwll. The two arms served up or down trains according to the side of the post.

A replica signal of this type has been erected at Tan y Bwlch. This serves no operational purpose and is a purely cosmetic item.

Signals newsletter No.7, published 1st March 1972, had on the front sheet a sketch made by John Wagstaff of an old Company double-arm signal. The description inside the newsletter read: 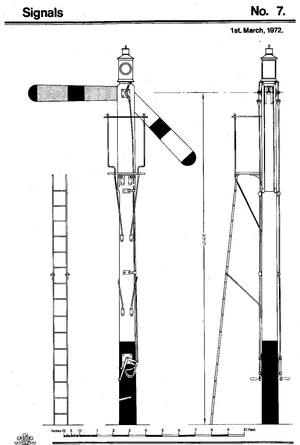 Our illustration is of one of the double-arm semaphore signals which were such a prominent feature of many stations on the old line. We must explain right away, though, that so far as we know, there remain no drawings of these signals as they actually were, nor have any relics survived. Our illustration, therefore, has been prepared from a number of sources, of which the most important is undoubtedly two drawings provided by Michael Seymour, the Company Archivist. These seem to have been prepared by Brown, Marshall & Co., to show the sort of thing they hoped to supply to the railway. Each drawing differs in important details from the signals as they appear in photographs, these published photographs being another source of information. As in so many things concerning the Old Company, there seems to have been some variation between individual items which elsewhere one would expect to be identical. In particular, neither the lamps nor the arms were uniform – no doubt partly as a result of occasional renewals and replacements.

The origin of these signals is obscure. Along with the old Discs and Point Indicators, they came to the railway from Brown, Marshall & Co., who also supplied the early four-wheel and bogie coaches. This was, at the time, a highly reputable firm of carriage builders, who later became the Metropolitan-Cammell, Ltd. And it seems improbable that they ever manufactured very much signalling equipment. It is far more likely that, having secured orders for coaching stock, they managed to interest the Company in their services as middlemen in connection with the supply of other equipment. In the days before there was easy communication between the Midlands and North Wales, such an arrangement would have been to the benefit of the Railway, for the firm concerned would probably regard themselves as responsible for the standard of equipment provided, and would so perform the function of Agents for the Railway. In these circumstances, Brown, Marshall’s would have approached one or more of the signalling firms already well established at that time, and have eventually authorised one of them to supply the apparatus required. The puzzle is: which one? (Only with the greatest difficulty has one of us restrained the other from writing several pages on this mystery!)

We would suggest that there are several features of the old semaphores which call to mind the distinctive practices of both McKenzie and Holland, and of John Saxby. These two early signalling firms supplied for many years various types of equipment, of almost identical design. However, when it came to the sale of items protected by patents held by one and not the other, they were implacable enemies, and matters ended up in the Courts on more than one occasion. Of particular interest on the old semaphores, therefore, is the unusual design of the lamp, which appears to have internal spectacles operated by external linkage from the arm pivot. This was a particularly jealously guarded patent of John Saxby, who, so far as can be discovered never allowed McKenzie’s to make anything of the sort. (A manufacturing licence was, it would appear, issued for the Linley Company, who once made some amazingly archaic signals for the Isle of Man, and who had a lot to do with the original production of the three-aspect oil hand-lamp – with its internal revolving spectacles). The curious shape and painting of the arms is also suggestive. Whereas on most railways the red face of a stop arm had a white band, on the Festiniog the stripe was black. This was a peculiar feature of Saxby’s signals, well known upon the L.B.& S.C.R., where he was once in the Locomotive Department, and upon which Railway’s signalling he had a very strong influence for many years. Signals with similar arms, lamps, and posts, appear in early Saxby and Farmer catalogues. However, much of this is conjecture, and although we suggest that they came from Saxby’s, the true origin of the “Brown Marshall” signals will probably now never be known with certainty.

In view of the Old Company’s habit of running on the right-hand road when crossing at loops (or ‘sidings’, as they always called them), it is interesting to note that it is usually the left-hand arm that was painted red. Allowing even for the peculiarities of ortho-chromatic materials, it is fairly certain from photographs that on some signals the right-hand arm was red at one period, although the dates are not known to us. There are, of course, a very large number of photographs of Tan-y-Bwlch, and the shape and colours of the signal arms can be seen to have altered several times.

Bearing in mind the lack of fully accurate drawings, and the variations between individual signals, we offer this drawing as an attempt to record a notable feature of the old line. (In the front elevation the ladder has been moved to one side to avoid obscuring detail).

This was written as being from both John Wagstaff and myself. This is kind of John, as it is almost entirely John’s. John was much interested in the Brighton line and the firms that had combined into Westinghouse Brake and Signal Company and he had gathered old catalogues and researched their histories. At the time I was heavily focussed on bringing the signalling into use at Penrhyn loop and level crossing in time for the Easter opening and I was also planning a major recovery exercise of signalling equipment at the long Easter weekend on the already lifted Afon Wen to Caernarfon line.