Staff and Ticket is a system of safeworking for single line section, with the prime aim of preventing two trains in opposite directions entering that section so as to cause a collision. Only one train is allowed into a section at a time, though this can be modified by the use of tickets. Staff and ticket working was used on the FR until 1912 and is currently used on the WHR. 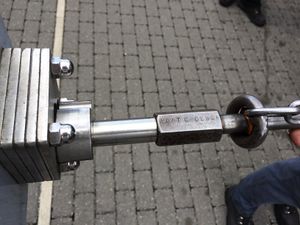 A closeup of the staff for the section Porthmadog-Pont Croesor.

The train staff is rod say 12 inches long, with the following characteristics:

When two or more trains have to follow each other in the same direction, there is a problem, because the Train Staff may end up at the wrong end of the section. To avoid this, tickets are issued to all but the last train to proceed in that direction. The relevant details are written on this ticket, which becomes the authority to enter the section. The driver or guard of the train has to sight the Train Staff before they accept the ticket.

Ideally, the tickets are printed on the same colour paper as the owning Train Staff, though sometimes this rule is relaxed so that white paper is used embellished with the name of the colour in words. On the WHR metal tickets are used.

Tickets are stored in a coloured box locked by the staff.

The colours may also be associated with a shape, such as Red-Round and Green-Heart.

Staff and Ticket on the F&WHR[edit source] 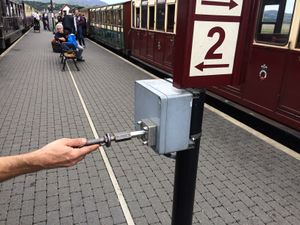 The section staff for the section Porthmadog-Pont Croesor being inserted into the key switch at Porthmadog Harbour Station to activate Brittania Bridge Level Crossing.

Staff and ticket was used on the FR until 1912 when it was replaced with the Electric Train Staff. The system was also used on the NWNGR and original WHR.

Staff and ticket is currently used on the WHR. It was replaced between Porthmadog and Rhyd Ddu by Micro-ETS in July 2021, with the sections between Rhyd Ddu and Caernarfon being replaced at a later date. The staffs are/were all coloured differently to help distinguish them. The metal tokens are/were similarly coloured.

Current WHR sections are as follows:[1]

Former staff and ticket sections are as follows: