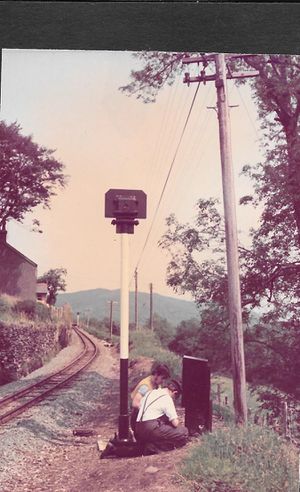 Temporary colour light home signals were brought into use at Tan y Bwlch (May 1970) and Minffordd (March 1971). These places had been chosen because in the high season they were timetabled as passing places for service trains. In addition, Minffordd dealt with engineers' trains into and out of Minffordd yard, which sometimes happened between the passenger trains. With increased demand, the 1971 timetable reduced the number of trains passing at Minffordd to one and focussed instead on Penrhyn, which is about halfway between Harbour and Dduallt.

Whilst completing the work at Minffordd, approval was gained from the Railway Inspectorate for a similar temporary scheme at Penrhyn – see Penrhyn Operations for signalling layout. This scheme was the same in principle as Tan y Bwlch and Minffordd, using three-aspect red/yellow/green colour light signals. In addition, a down gate repeater signal was provided for the adjacent level crossing with a warning bell for approaching trains. A power supply, and probably the control contacts, were provided for the Electrical Department to fit electric lamps to the crossing gates. The old-company down disc signal was renovated as the Down Whistle/Caution Board with the disc to face traffic and the approach side painted a bright yellow. A large ‘W’, painted black, was made in Boston Lodge and bolted to the face.

At the start of 1971 the Signal Gang were confident that the signals would be commissioned for the summer high season timetable. A major blockage in the main cable route through the station and lack of steel for equipment bolts were the principle reasons for the scheme being delayed, and so resources were diverted to the new signalling schemes at Dduallt and Harbour Station, which were being run in parallel.

The Penrhyn colour light home signals saw three summers of timetabled operation and then Rhiw Goch was brought into use. This was a good thing as Penrhyn was difficult to operate and restricted the length of trains. Read Tim Maynard’s interesting and comprehensive description of operating the Loop at Penrhyn – Penrhyn Operations.