Disc signals were a type of signal used by the Festiniog Railway from the mid 19th century until the 1920s. After they fell out of use a number survived to be restored as heritage features. The design lives on in the form of fixed distant signals and stop boards erected in more recent times on both the Ffestiniog Railway and the Welsh Highland Railway. 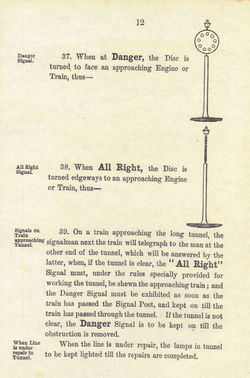 Page from 1872 Rules about Disc Signals

Disc signals were used as auxiliary signals (a near equivalent to modern distant signals). However, their exact use was very dependent on context: a disc preceding a 'modern' semaphore signal would be regarded as a distant, yet by the 1920s the surviving disc Signals were largely regarded as 'stop' signals, where not pure level crossing signals.

There were several oddities: Tanygrisiau had two disc signals on the up, with the inner disc acting as a repeater for the Outer Disc - this is presumably to cater for trains originating at Wrysgan; the disc at Penlan also applied to Up trains - again presumably to protect trains shunting Cwmorthin Siding. It is highly likely that this 'protection' aspect is the reason for the disc remaining in situ until preservation times. Tan y Bwlch also had an inner disc at one stage, protecting the diamond crossing and later siding connection into the goods yard from up trains. Boston Lodge seemingly never had a double arm semaphore, possibly because it was not always open as a staff stage station, but the discs there were described as both 'home' and 'starter' for the appropriate direction. It is difficult looking back through the mists of time to make a hard-and-fast definition for disc signals: at best some indicated a 'deferred stop' and some just indicated 'stop'.

The disc signals consisted of a three-foot diameter disc mounted on a fluted cast-iron column. On top of the disc was a lamp of normal pattern. The disc revolved through a right angle and was worked by a twin-wire running to a capstan at the station centre. Each station had two capstans, one for each of its disc signals. On top of the capstan was a small disc repeating the position of the signal proper. The two aspects were: Danger - the disc face towards the train; All right - the disc turned edge on to the train. Discs were sometimes used as stop signals outside station limits, e.g. Glan y Pwll until 1896.

Boyd's diagram of signalling at Minffordd circa 1881 on page 392 shows no fewer than nine disc signals at Minffordd, some of which were stop signals. Recent research has shown that Boyd must have added two extra signals based on 'SP' (signal post) markings on the large-scale Ordnance Survey. The diagram shown here of Minffordd c.1923 is a synthesis of two Gwynedd Archives files. Note how the Disc signals are not labelled as Distants.[2]

There is an article in Heritage Group Journal which includes drawings by John Wagstaff from the FR S&T informal newsletter "Signals" of 1971 (reproduced below). He observes that the working of these signals with two twin-wires pulling them to rotate in the different directions was not fail safe.[3]

Use of the disc signals ceased in the 1920s.

There is a good photograph from the 1960s of the disc signal between Minffordd Weigh House and Quarry Lane Crossing by A.J. Powell. 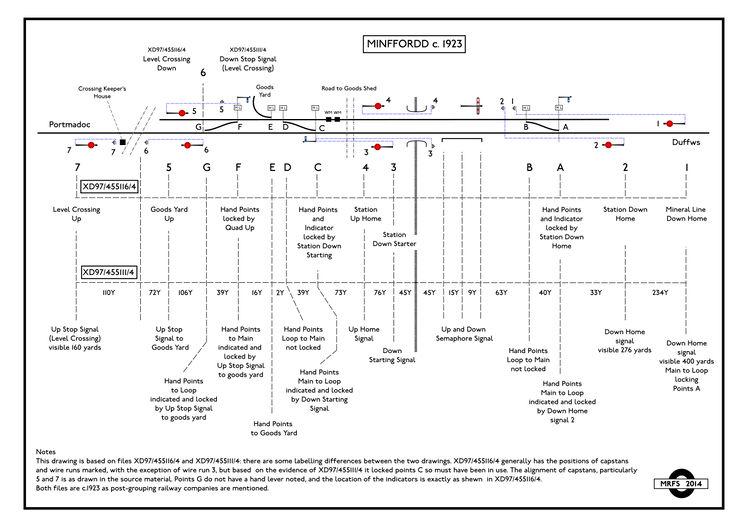 Minffordd, as drawn c.1923, prior to cessation of the 'old style' signalling and laying in of the new 'middle' crossover road

In 1971 a disc signal above Penrhyn was given a brush down and repaint and a new concrete base cast. The disc was fixed to face traffic and on the front was bolted a large W for "Whistle". It then served as a Down Caution/Warning Board for the crossing loop at Penrhyn.[4] New fixed distant boards were introduced using discs painted in a similar fashion mounted on simple posts. Often these don't have actual holes in the disc but instead a ring of black spots to give the impression of holes.

The FR Heritage Group is actively funding work by JASPER (Joint Assosciation of Signal Pole Erectors and Renovators, a volunteer signals group) to erect more original and replica disc signals around the Cob, Boston Lodge, Minffordd, Penrhyn and Tan y Bwlch. The one in the picture below was erected by JASPER in 2005. These re-erected disc signals are not operational and the discs are fixed in the 'clear' position. They serve to adorn the railway and remind observers of its long history of railway signalling. For information on the refurbishment of the disc signals see the JASPER working party reports on the FRS web site. In 2013 a disc signal was brought back into use in a new position on the Cob to act as an outer fixed distant signal for the new layout and signalling installation at Harbour Station.

In 2015 JASPER added to the tableau at Minffordd with two capstans placed back in their original locations. Although fixed in place they are not wired up to the signals. 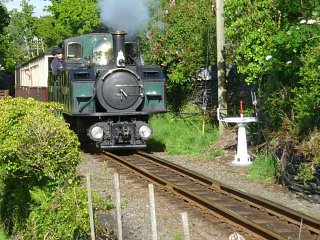 Following on from the fixed distants described above the disc design has been adapted again for use with Welsh Highland Railway signalling. The WHR mainly uses stop boards in place of traditional signals. BR stop boards normally have a small red circle and the word "Stop", the WHR design instead has a large red circle with a ring of black dots in order to resemble FR discs. Those signals which use lights to give a proceed indication have the lights positioned in place of the top and bottom most dots. The appearance of these signals has led to them sometimes being called "ladybird" signals. This type of signal is also used at Tanygrisiau, which has WHR style signalling. 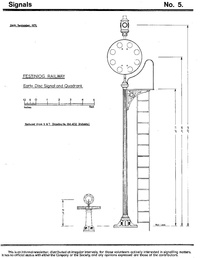 Signals No. 5, September 1971, the S&T informal newsletter produced by John Wagstaff and David Josey had an early Disc Signal and Quadrant on the front page – probably measured from the one that in 1971 was still in-situ above Penrhyn. John had particularly good penmanship skills as can be seen from the dimensioned sketch.

The large disc signals formed part of a standard coherent signalling arrangement that was installed throughout the FR in the 1860s - although some places had embellishments, such as Penrhyn, and some had less than the full set, such as Dduallt. When approaching a station, a Driver would first reach the disc signal, fixed at some distance from the outermost facing points. The post was mounted upon a brick or stone block, and it is evident from those bases and signals which survive, and from the old drawings, that the Company went to some trouble to provide as good an approach view as possible of the disc. When considering the sighting one must remember that there were few trees at that time on the hill and mountain sides. If a driver found the disc at ‘Danger’ (with the face of the disc at right angles to the track) he had to bring his train to a dead stand, and then proceed slowly towards the station, whistling to warn of his approach.

Each disc was worked from a small quadrant, to which it was connected by two signal wires, forming a continuous loop. One side of the loop pulled the signal to ‘All Right,’ with the face of the disc parallel to the track; the other side returned the signal to the ‘Danger’ position. Whereas this system had the advantage of providing a positive pull to the ‘Danger’ position, as compared with the usual gravity arrangements in use elsewhere, it had the very serious disadvantage that a broken wire could not only cause the signal to remain at ‘All Right’ when it should be at ‘Danger,’ but tension in one of the wires could operate the signal, should the other wire break. The operating quadrants were located usually within the station Loop, or Siding as it was then called, though they were not grouped together - dispersed signalling one could call it!

Each end of each wire was attached to a short length of chain which passed round a wheel in the base of the signal or quadrant, the other end of the chain being attached to the wire on the other side of the loop. The flanges and groove of the chain wheels were smooth, and to prevent the chain from slipping, a small set screw was passed through one of the links in the chain and into a tapped hole in the rim of the wheel.

Writing in 1971 the authors added ‘We believe that the only quadrant to survive in position is the one just above Penrhyn Crossing, as the two that were formerly near Minffordd Crossing have been removed for use at Brockham.’