McKenzie & Holland were a major signalling manufacturer of the nineteenth century. They were the main supplier of signalling equipment to the FR and the NWNGR in the latter part of the nineteenth century and until fixed signals became less necessary with the 1923 Light Railway Order. The recent (2014) signalling installations for the new Harbour Station layout have been made to closely resemble McKenzie & Holland originals. A good example is the new Trident Signal. 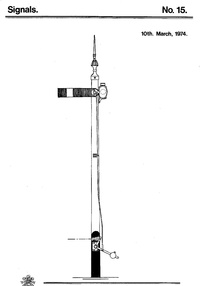 The new semaphore signals at Harbour station have finials based – it is understood – on a sketch by John Wagstaff. This dimensioned and scaled sketch was produced by John and used for the front sheet of the Signal Gang’s last newsletter, Signals No. 15 of March 1974.

As can be seen from the main sketch the signal was elegant and the finial that graced its top very nicely finishes the upward lift of the eye. Many call it a finial, though in some areas it is also called a pinnacle. In John’s narrative he calls it a pinnacle:

The main drawing details the type of straight-post lower quadrant signal supplied to the Old Company in the 1870’s. The signalling in the area from Glan-y-Pwll to Duffws was completely different from that of the rest of the line. By the time that the Nos 1, 2 and 3 Boxes were put in, there had emerged a form of comparatively uniform signalling throughout the United Kingdom, and this, with modifications, remains the standard for mechanical signalling to the present day. Thus, in the seventies the principal contractors were no longer prepared to supply the old types of disc, and the big double-semaphores. At the time, there were several schemes for the use of modern equipment at Minffordd, Tan-y-Bwlch, and Tan-y-Grisiau. In the event, the only semaphores installed were those at the three Boxes in the Blaenau area.

The signals supplied were to the standard McK & H design, the most prominent feature of which was, perhaps, the extremely tall pinnacle surmounting the post. It seems almost certain that McK & H varied the design very slightly for each of their customers, and, to illustrate this on the third sheet the type supplied to the F.R. is shown alongside a contemporary which went elsewhere. I have detailed drawings of no less than twelve different pinnacles, all generally similar, but no two identical. It would appear, however, that all pinnacles supplied to a particular Company were invariably the same.

Another feature not seen today is the use of only one glass in the spectacle (except now at Harbour). This was red, and when the arm was lowered it moved away from the front of the lamp, which then showed white for “Clear”.

John had the base of a McKenzie and Holland pinnacle. One of the signal gang made a tapered top for it, so the height was two to three foot. John had this on his desk at work. By the 1980s there was colour light signalling on most of the main lines, and so the younger generation was less informed of mechanical signalling. When in Reading, younger railway people would visit him in his office and eye this ‘thing.’ When asked he merely said, with a straight face. ‘It’s a paper weight!’ Signals' No. 5 says that the finial of the old Down Home signal at Harbour station, which was replaced by the somersaults, was badly damaged but was repaired, so perhaps this was the finial that John had.