An early mention of passenger carriage is in Cliffe's Book of North Wales, (1850) wherein it says the tenant of the Oakeley Arms had lately set a carriage on the railway for tourists.

Before the official introduction of passenger trains, a number of gravity vehicles were used for special passenger workings.

Purpose-built passenger vehicles were provided for the introduction of public passenger services in 1864, following the successful commencement of steam traction for slate haulage the year before.

The first generation of carriages was of the 4-wheel variety, believed to be the first narrow gauge carriages in the world. The FR then became a pioneer in the introduction of bogie carriage stock.

The links include not only the original vehicles but also modern replicas.

Gravity vehicles for carrying passengers existed from the early days of the railway, before the introduction of steam haulage. It should be remembered that even service passenger Down trains operated by gravity into the 1870s. Special gravity passenger vehicles included: 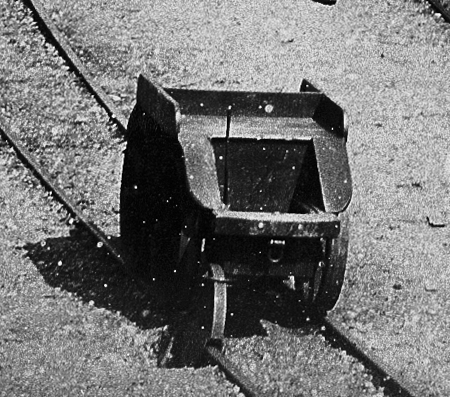 There are photographs of one particular carriage that has, to date, eluded identification. Details of this can be found here

Large numbers of four-wheeled vehicles were provided from 1867 to convey workers to and from quarries in the Blaenau Ffestiniog area. There were three main types, with the first two types undergoing enhancements before giving way to the next type. For more details see the Quarrymen's Carriages page.

As the Railway was not compelled to attach brake vans to goods trains, and tended to run mixed trains rather than goods trains in any case, there was not a great need for goods brake vans. So said Boyd in an earlier edition of his great work, and this may have been true in the early years. However by the early 20th century the situation had clearly changed as several goods brakes were put into service at this period. They had a balcony at one or both ends and shared running gear with the third type of Quarrymen's Carriages, having been rebuilt from this type. One at least is recorded as being built for the traffic from Brookes' Quarry, which involved working loaded trains of granite uphill to Blaenau, and it was clearly considered unwise to try this without a braked vehicle at the rear. The same consideration probably applied to the traffic from Groby Granite Quarry also.

Another purpose of goods brake vans was for brakesmen returning up the line after having done duty on gravity trains, according to Boyd.