There were several buildings at Boston Lodge which are no more.

Alongside the old locomotive superintendent's office (Plas Smart) in the Top Yard and forming a continuous range with it was the original waggon shop of the FR Co, a stone building from 1842. Writing in 1975 Boyd said that on the floor there was some fish-bellied track on stone sleeper blocks. This had been excavated in 1956[1]. See iBase 762. In the roof was stored at that time the garden track for Topsy from Bron-y-Garth. The building later became a timber store[2] but was very decrepit and largely roofless by 1956, being demolished between then and 1961.[3] In 1970 further excavation unearthed a curious traversing turntable within the area of the building. In 2015 excavations revealed more evidence of track, flooring and wall foundations, even down to the original quarry floor[4]. Although under the same roof the office and the waggon repair shop were separated by a gated passage through the building which carried a siding to the sand pit outside to the north. The new road access to the works passes through the site of this passage and the north-western end of the waggon shop site, but present plans propose a replica of at least part of the building at some future date[5]. 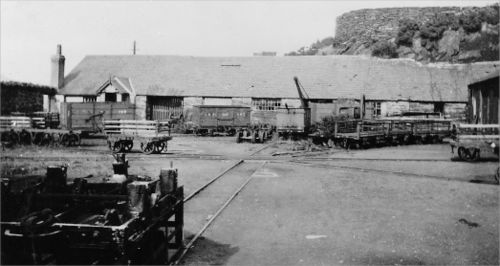 Office to left, then the gate over the sandpit siding, then the Waggon Repair shop. 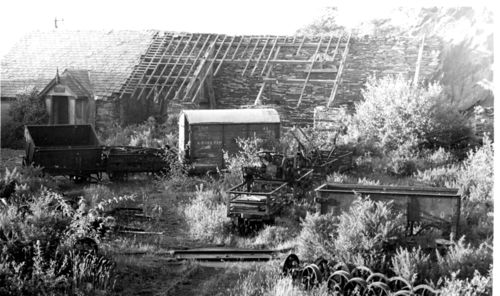 Immediately to the north of the Blacksmith's Shop (99) was an extension building partly on the site of an earlier building demolished in 1877. The function of the earlier building is not certain but probably waggon building and repairs. The smithy extension was not stone-built like the Blacksmith's Shop except for the back wall (which may have been from the previous building). The front and roof were corrugated iron[6]|. It was demolished in 1962[7] (according to Boyd it 'just fell down'[8] during demolition of the Joiners' Shop) except for the back wall which is still standing to this day. For a picture shortly after demolition see here. The site was later occupied by the Britomart Shed (corrugated iron) and the S&T Workshop (former Tunnel Mess), both recently demolished (2018). Future plans include reinstatement of this building, probably to be used as storage and an electrical workshop[9]. 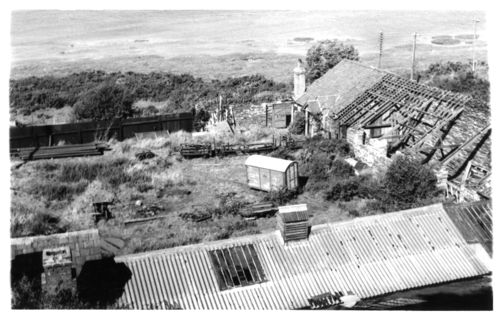 This was behind the Smithy Extension and used the back wall of the latter for support, being otherwise wooden-framed, clad in corrugated iron, with light steel roof trusses. A small extension passed round the end of the shared wall and into the North Yard with its front alogside and adjacent to the Smithy Extension. Rail access to the main part was by way of the long siding curving across Glan-y-mor Yard to the Gunpowder Sheds, then by a backshunt in front of the old Carriage Sheds (crossing all four tracks on the level) thence behind the Erecting and Machine Shops. There was also rail access (at right angles) into the extension part from the North Yard, probably for incoming materials. The building's condition was very poor and it was pulled down in 1962[10]. 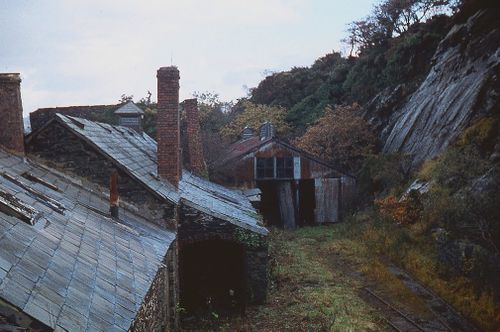 Carpenters' Shop beyond rear of Blacksmiths' Shop (with leaning chimneys) 1961

A long building stretching from the Bottom Yard to the south side of the Brass Shop, and backing on to No 1 and part of No 2 Boston Lodge. In bad condition, it was cleared out in 1962[11] but the date of its final removal is not known. The new Den now occupies part of the site. Future plans include a new two-storey building to replace the new Den but fully occupying the site of the Sawmill. 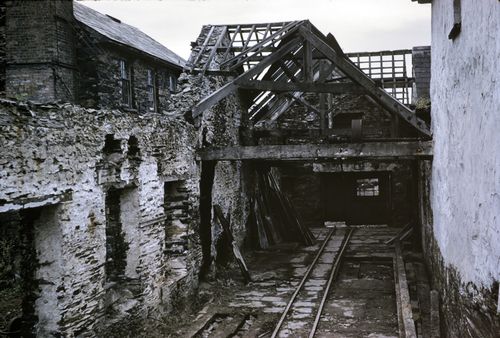 Between the Sawmill and No 1 Machine Shop, this originally housed a stationary steam engine, but in 1925 Col. Stephens purchased a Tangye 22hp oil engine, the FR to repay him in instalments from the money saved in coal [12]. Unfortunately in 1939 this engine was destroyed in a fire which also damaged the buildings including the sawmill, foundry and pattern loft. A Bolinder semi-diesel was obtained in replacement, which was itself later replaced by a Crossley diesel, but it is not clear where these were installed or if the building was partly repaired[13]. The Crossley was restarted in 1955 but was eventually replaced by an electric motor in 1962[14]. By this date an increasing proportion of the machine tools were powered by individual motors, but it is not known when the line-shafting was finally taken out of use. (It is still in place in the Erecting Shop and possibly elsewhere). The remains of the building were removed later in 1962 to make a way though to the Top Yard[15].

This was located by the boiler and engine house just north of the old machine shop. Originally it was a round iron chimney erected before 1886 [16]. At some point it was encased with bricks and became square. It is a prominent feature in old photographs of the works. It was demolished in Winter 1978-9 by erecting scaffolding and knocking the bricks inwards. This seems to imply that the iron chimney had not been retained as a liner when the brickwork was added.[17]

The Long Shed separated the Lower Yard from Glan y Mor Yard. Until 1939 it was the paint shop[18]. After the revival it became the locomotive running shed as it was considered essential to keep the locomotives in use close to the workshops. The Old Locomotive Shed by Boston Lodge Halt became the carriage shed at this time. A pit and wheel drop were installed in the Long Shed in 1958 and 1959 respectively[19] [20] & (Wilson, 1963). It was demolished in early 1988 due to serious structural decay[21].

There were two two-road carriage sheds side-by-side in Glan-y-mor Yard just south-east of the Erecting Shop[22]. During the dereliction period the southern one was hit by rock falling from the cliff above and the roof collapsed, to the detriment of the carriages inside[23], nos 18 and 20[24]. It was demolished in 1956[25]. The other one was used as a Paint Shop for a while but in the mid 1960s what was to become the present Loco Shed was built in front, and it is now part of that shed.

For information and a picture of the signal box which was just beyond the head shunt at Pen Cob see the Signal Boxes page. The box had a wooden and glass front wall which had gone by the time of the FR revival leaving a shelter with three walls and a roof. In early revival days the Pen Cob point levers were on the other side of the track but later it provided shelter for the two lever frame which worked the Pen Cob points. For many years it had a FWA (Free Wales Army) graffito daubed on it. It was planned for demolition in 1979[26] to move the Pen Cob points further onto The Cob, but was still there in 1980[27] .

At the far end of Glan y Mor yard were three gunpowder stores used to store gunpowder for use in the slate quarries. They were used by Messrs. Curtiss and Harvey, contractors who imported supplies by sea to Portmadoc. Ships bringing the gunpowder were not allowed to enter the port but the powder was brought off by a wooden barge which used to fly a red flag [28]. There were specialised Gun powder waggons on the Railway. There is more information and a picture on the Glan y Mor yard page. There were archaeological excavations, photography and recording before the last remains were removed around 2015 as Glan y Mor was prepared for new buildings.