Gun powder waggons were used by gunpowder merchants to send supplies to the quarries. Several (at least partially) survive today, including two on the FR.

Number 152 was probably built at Boston Lodge for one of the firms supplying blasting powder to the quarries, probably Curtis's & Harvey. It has a riveted body with double doors at one end. It is one of the very few private owner wagons to run over the FR Co.. Was numbered 16 from early preservation days when it was in use as a cement van. It was renumbered 152 in 1967. It presently carries a fictitious livery but is similar in style to a livery just visible in one of the Bleasdale Photographs. [1] The Gun Powder Van was used at Boston Lodge to store sand for locomotives until late 2005 when it had to be withdrawn because the body sides, at the door end, had parted company with the floor and solebar. A survey showed that repairs would require the whole body to be removed from the underframe so that the floor and the angle connecting it to the body can be replaced. This work was begun in May 2014 by the slate waggon team, who have also carried out repairs to the chassis before sending it away for grit blasting.

Other similar Gunpowder vans still exist in the Blaenau Slate Qaurries, it is likely that they were all built at Boston Lodge as they are mostly mounted on FR Slate Waggon type axleboxes. An example at Llechwedd Slate Quarry is mounted on a GWR slate wagon chassis.

The Festinog Railway Trust owns the body of another gunpowder waggon, which came as part of the ex-Maenofferen slate wagon sale in 2003.

"The Llechwedd waggon has no underframe and is of a different pattern to 152. Restoration requires the construction of a new underframe. This will be of new construction, using axle boxes ex-stock. It may require new wheelsets to be manufactured if it is similar 152 as the latter vehicle has longer-than-standard axles."

According to Boyd, Gunpowder wagons had the same dimensions (apart from height) as 2-ton Slate wagons. A wagon of this type still exists in Llechwedd Quarry and is on display, although it is mounted on a GWR Slate wagon chassis. 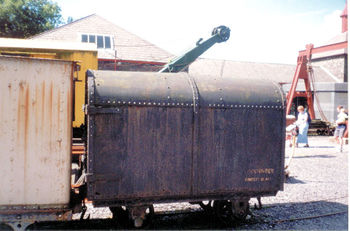 This example from Oakeley is the same type as the body acquired by the FR from Maenofferen. The bulk of underframe is constructed from L section iron (as per 152), this is unlike most other FR waggons which are made up of T section. Dimensions were taken of this frame to produce CAD drawings that will be used to laser cut the components required to produce a replica underframe for the 'Second Gunpowder Van'.