From Festipedia, hosted by the FR Heritage Group
(Redirected from Charles Spooner)
Jump to navigation Jump to search

Charles was the third son of James Spooner and was born in Maentwrog in 1818. From the age of 16 he, along with his oldest brother, James, assisted their father and Thomas Prichard during construction. Charles was thus trained as a civil engineer, gaining much practical experience that would stand him in good stead in his later life. Charles' training continued under both Joseph Locke and Isambard Kingdom Brunel in the late 1830s and early 1840s. In the 1841 census he is living with his family at Morfa Lodge. He continued to be involved with the railway under his father, who was Secretary to the Company.

Involvement with the Festiniog Railway[edit]

Charles was appointed Treasurer to the Festiniog Railway Company in 1847. In 1856 he succeeded his father as Secretary, sometimes referring to himself as Manager. He held the position for thirty years and dominated Ffestiniog Railway management and engineering until his own health began to fail in 1887. Under Charles the blacksmiths' forge at Boston Lodge was developed into comprehensive railway manufacturing and repair workshops.

Charles was faced with the seemingly intractable problem of a railway working to maximum capacity yet unable to cope with the volume of traffic on offer. He was also aware that others were seeking alternative routes for the transport of Blaenau Ffestiniog's growing slate traffic. He investigated the option of conversion to double track but the added capacity could not have paid for the construction costs involved.

Steam locomotives, never before tried on a narrow gauge line and declared by all the leading designers to be unworkable on so narrow a gauge, were inevitable. But they would not have been possible when the line was built in 1836 and could only be introduced 27 years later after the line had been relaid with heavier steel rails.

Charles was asked by the FR Board to work with Charles Menzies Holland to create a concept locomotive design that could be used to go out to tender with locomotive contractors. From this George England & Co. designed the first four small engines built by for the Ffestiniog. The first two engines delivered in 1863 required significant modification in the light of experience. This was, however, the first ever successful application of steam traction on such a narrow gauge. That two of the original four locomotives are still in regular operational use nearly 150 years after construction is an enormous tribute to the soundness of the design. Engines after 1872, were delivered on the newly opened Cambrian Railways to Minffordd where Spooner had laid out a pattern of exchange sidings that inspired many visitors from abroad to adopt narrow gauge as the inexpensive feeder line to the standard gauge.

It was through George England that Spooner commissioned Robert Francis Fairlie to design, and George England & Co. to build Little Wonder, an articulated locomotive ideally suited to a relatively short, heavily curved and steeply graded narrow gauge line. Spooner and Fairlie brought the world to Porthmadog in the February of 1870 for a remarkable series of locomotive trials at which Russian observers were very prominent as were observers from the Denver and Rio Grande Railroad. These trials and the writings of Spooner and Fairlie influenced the promotion narrow gauge railways throughout the world. On 27 December 1872 Engineering wrote of Charles, "He shows an earnestness and enthusiasm, we may almost say an absolute devotion for the Festiniog Railway".

In December 1878 , William H. Bishop, Scribner's Monthly's 'Travelling Reporter', on his visit to the FR and subsequent article described Charles Easton as "a hale, dignified gentlemen of sixty. His son Percy, a young man of energetic and companionable traits, my guide in the subsequent explorations , assures me that he is not beyond the ability to turn 'cartwheels' yet with the agility of youth."

It was Charles' energy and vision that completed the transformation of the Festiniog from an insignificant, horse-worked, mineral tramroad into a public railway that matched the best in the land in all but gauge and size of trains. It is therefore surprising that he took the risk that he did on 12 February 1886. On that day he left Tanygrisiau in his private vehicle, The Boat, to travel down the line under gravity but without the staff. The inevitable happened and The Boat collided with an up train near Garnedd Tunnel. Of the four people on board two managed to jump clear but a Miss Robinson and Charles were injured. According to Dan Wilson[1] he also blotted his copy book with the advice to the Welsh Slate Company to "shave its pillars" which resulted in collapse of both quarry and company.

In addition to his work on the FR, he formed an engineering company Spooner & Co. He was responsible for re-engineering the tramroad from Penrhyn Quarry, Bethesda to Port Penrhyn in 1877 with what became known as the Penrhyn Quarry Railway. It was closer to post steam FR technology but never carried paying passengers.

Charles married Mary in 1848 and they set up home at Hafod Tan y Craig, Nantgwynant, Beddgelert. By the time of his appointment as Secretary they were living at Tuhwnt'rbwlch, Portmadoc. They later moved to Bron-y-Garth, Portmadoc where they lived for the rest of their lives; Mary died in 1860. Mary's family were great public benefactors in Birmingham. In 1869 he built a 3⅛" gauge railway in the garden for the entertainment of family and friends. Such a feature was an undoubted novelty at that time. The brass trackwork and rolling stock were made at Boston Lodge, where the surviving track is now stored. The locomotive Topsy was built by William Williams (1836 - 1915), superintendent of Boston Lodge works. It was thought to have been lost but was rediscovered and brought to Porthmadog in 1966; it is now on display in Spooner's. This must have been one of the very first working model locomotives and surely must be among the oldest in existence now.

Charles and Mary had five children.

Soon after Spooner's wife Mary died in 1860 his sister Louisa came to live with him, no doubt to act as housekeeper and look after the children. She was still there at her death in 1886.

He gave money to help build St John's Church in Porthmadog and is commemorated with a stained glass window there. 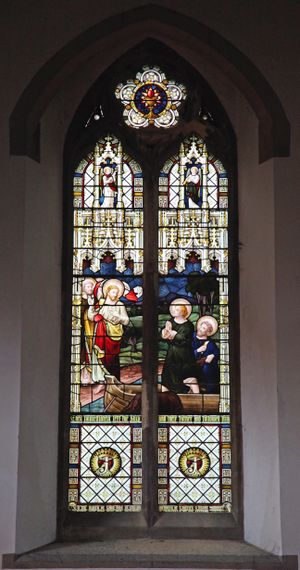 P. J. G. Ransom in his book Narrow gauge steam: its origins and world-wide development, Sparkford: OPC, 1996, when comparing Fairlie with Spooner, noted that Charles Spooner's character was the more solid of the two: the one-time horse-tramroad engineer who, by advancing step by step, transformed his charge into a small-scale steam main line. He showed more than professional skill in his work. More than that, he became famous for his willingness to share his experience with others.