From Festipedia, hosted by the FR Heritage Group
(Redirected from Flag Boards)
Jump to navigation Jump to search 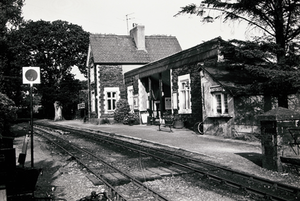 A picture of Minffordd in the preservation era with a flag board on the left. Photo from the Alan Pegler collection via iBase Festiniog

Flag Boards were a rudimentary kind of signal used on the revived Festiniog Railway, before more advanced signals could be obtained.

Signals No.1, an unofficial FR newsletter of December 1970 stated the following:[1]

When a train is between stations it is protected by the Electric Train Staff, but when it enters a station it loses this protection, and is dependant for its safety on the good offices of the Blockman. He in turn, needs some manner in which to prevent an additional train from entering his domain until he is ready for it. The 'Flag Boards' were a very useful first step in this direction, but being operated manually, the Blockman had to walk to each of them each time he wished to change tham to 'Clear', or, far more important, to 'Danger', and, of course, this could not be done from the station.

The 'Home signal' Flag Boards were superseded when Temporary Colour Light Home Signals were introduced at Tan y Bwlch (May 1970), Minffordd (1971) and Penrhyn (1972). The 'Starting signal' Flag Boards continued in use until replaced by colour light signals in the following phase of upgrading the FR signalling. Tim Maynard seems to refer to Flag Boards as target boards and it appears that is what the Rule Book called them. They were still in use at Penrhyn as starting signals in 1975 - see Penrhyn Operations. According to Tim, "Target board starting signals were placed in their respective posts (believed to be the ends of old boiler tubes)". Tim has suggested that target boards came into use at Minffordd and Tan-y-Bwlch in 1969.[2]

A target board in use as the down starter can be seen at Minffordd in the picture below from the cover of the Ffestiniog Railway Magazine No. 47 in 1969/70 winter.

The target board is just to the left of the cab of Earl of Merioneth. It is approximately a 12" square board with a red circle on one side and a green circle on the other with a white background and it is mounted on a post which stands about 6 feet high. The board had to be turned manually by the Blockman. After turning the target board the nail through the target and the post had to be reinserted in the holes in the post to ensure it didn't revolve in the wind and give the wrong aspect.

The second edition of the FR Volunteer's Manual was published in December 1965. It contains a section entitled "Crossing of trains at stations".[3] It lays down that trains approaching from opposite directions must not be allowed to enter a station simultaneously and wherever possible the down train will be admitted to the station first. A train must not be allowed to enter a station unless both the top and bottom points are set for it. Drivers must always stop their trains short of the station (well clear of the facing points) until called forward. There is no mention of target boards so presumably they had yet to come into use in 1965 and the blockmen signaled trains into the stations with hand flags.

One of these Flag Boards (sometimes called lolipops) is said to still be in the token instrument cupboard at Minffordd.[4] 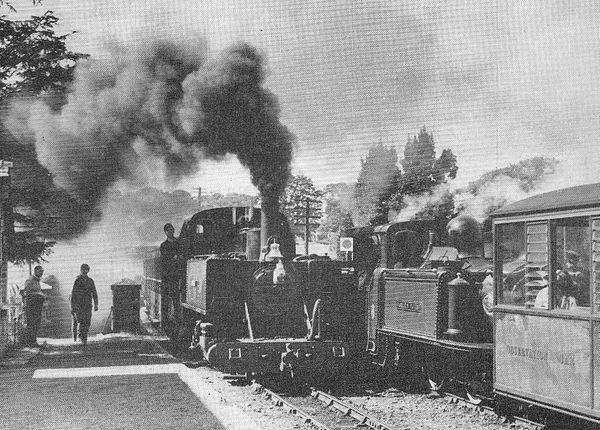