From Festipedia, hosted by the FR Heritage Group
(Redirected from WHR Signals)
Jump to navigation Jump to search 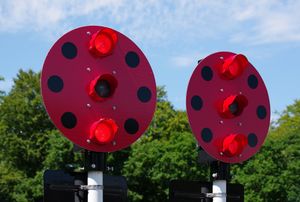 This page gives an overview of signalling on the Welsh Highland Railway.

Signalling on the old WHR[edit source]

The North Wales Narrow Gauge Railways line from Dinas Junction to Rhyd Ddu was signalled conventionally for its time; there were signal boxes at Dinas, Tryfan Junction and Waunfawr and probably other locations too. It was equipped with semaphore signals. Even the small station at Snowdon Ranger at one time had at least one semaphore signal. By the time the railway was reopened as the WHR, much of this signalling was out of use and the signal box at Dinas became a store hut.[1] The specification of the work to be done to overhaul the NWNGR section for use by the new WHR in 1923 includes the removal of signalling at Dinas, Tryfan Junction. Waenfaur, Rhostryfan and, Bryngwyn.[2] The telephone system was the key to WHR operation. The link was carried on cast-iron poles on the NWNG section and wooden poles on the new WHR section. The equipment was by Siemens. There were telephones at Dinas, Tryfan, Waenfawr, South Snowdon, Beddgelert, Nantmoor, Croesor Junction, Pont Croesor, Portmadoc New and Portmadoc Harbour. [3] From Beddgelert to Portmadoc the new telephone was installed on posts 60 yards apart and they were fixed to existing posts of the North Wales Power Co where these already existed. The railway's telephones were very unreliable and when there were emergencies such as locomotive failures the train crew quite often had to resort to using GPO telephones which were available at post offices such as in Beddgelert.[4] The railway was operated on the staff and ticket system.

Signalling on the modern WHR[edit source] 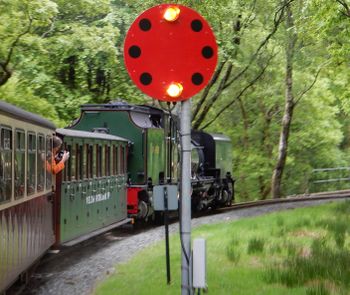 143 passes the Beddgelert up home board.

The signalling on the WHR is much simpler than that used on the Ffestiniog Railway.

In order to enter any section of line, the train crew must obtain permission from Control and the relevant token. Each section of line is a token block section. The WHR uses the traditional staff and ticket system between Caernarfon and Rhyd Ddu, in which trains can either be issued with the section staff or a numbered ticket. Tickets allow multiple trains to pass one-at-a-time through a section in one direction. The Controller advises the train crew which method they will be using. Tickets are kept in a locked box, opened by a key on the staff. This means the last train must use the staff to pass through the section, so it can be used for trains to travel in the opposite direction. For additional protection, both the footplate crew and the guard must see the staff before the train can depart regardless of whether or not it is using a ticket. The staffs are all coloured differently to help distinguish them. The metal tokens are similarly coloured. Between Porthmadog and Rhyd Ddu, Micro-ETS is used, meaning that tokens can be obtained at either end of a section from a token instrument, which is more flexible.

The signalling at Harbour Station is easily the most advanced across the WHR. Its installation in 2014 set a new standard of F&WHR installation with a signal box with a miniature mechanical lever frame, relay house, seven track-circuits and Mackenzie and Holland inspired semaphore signals of which the Trident Signal is the largest. The semaphore signals are complemented by ground-level colour light shunting signals.

The majority of the points at passing loops are operated automatically using the Automatic Train Operated Trailable (ATOTP) system, rather than a manually operated lever or point motor. Instead of traditional signals to indicate that a train can enter a section or station, stop boards are used instead. The stop board design is based on the old FR disc signals. BR stop boards normally have a small red circle and the word "Stop", the WHR design instead has a large red circle with a ring of black dots in order to resemble FR discs. Those signals which use lights to give a proceed indication (home signals) have the lights positioned in place of the top and bottom-most dots. The appearance of these signals has led to them sometimes being called "ladybird" signals.

At some stations, a "shunt" token is used to allow shunting to take place (such as a locomotive running round a train). They are provided at Dinas, Rhyd Ddu, Beddgelert and Pont Croesor. The shunt token can only be withdrawn (used) with permission from Control and if there are no trains approaching the station in the adjacent single line sections. Withdrawing the token causes the two yellow lights to go out on the home board on the line approaching the station, preventing other trains from entering the station. Stations without shunt tokens have no home boards. Where sidings exist, the points can be unlocked with a key on the staff. 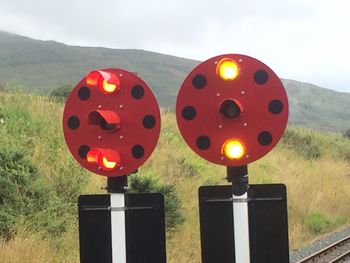 Resignalling of intermediate stations began taking place in the winter of 2017/18. The plan is to upgrade signalling and standardise the layouts at stations, improving both safety and flexibility. All stations will now be equipped with home signals and shunt tokens. Many of the signals have also had their positions adjusted to improve sighting.

All stop signals under the new style have a light at the top and bottom (and centre of starting signals). The top and bottom lights operate on a similar principle to the old-style home boards but with the ability to show a danger aspect by lighting up red. The home boards are now cleared by the operation of outer treadles (in advance of the distant board) rather than showing clear even when no train is approaching.

Starting signals operate along the principle as those at Tanygrisiau; the signal will only clear when the appropriate token is inserted into a key-switch. However, unlike at Tanygrisiau, the key switch is in the token room rather than on the signal post, and the danger indication is given by the two red lights, not no indication. Signals are returned to danger by the operation of treadles. When the shunt token is out the central light of the starting signals show a white aspect (another feature not present at Tanygrisau). Following the introduction of Micro-ETS, starting signals on those sections so equipped are cleared by the withdrawal of an appropriate token.

Beddgelert and Pont Croesor had the new style signalling operational in time for the start of the 2018 season, with Rhyd Ddu following in winter 2018/19. Waunfawr and Dinas will be completed at a later date.

The table shows the boards/signals passed by a train as it leaves a section and passes a station in the order they are passed, under both the old system and the new system. 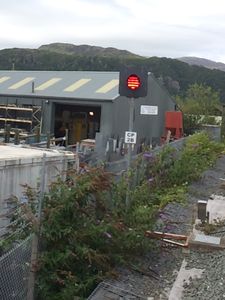 The signal (CP2B) controlling the WHR's access to Cae Pawb in the down direction.

Cae Pawb is at the north-western end of the Network Rail Harlech to Porthmadog signalling section, which is controlled from Machynlleth Control Centre. Standard gauge trains are protected by signals and wide-to-gauge trap points on the WHR line, which are interlocked with the standard gauge ERTMS signalling. The crossing is activated locally and ERTMS automatically gives permission for WHR trains to cross provided the standard gauge section is available. A crossing controller operates the crossing when passenger trains are running, with operation at other times being carried out by the train crew.

A set of replica white wooden crossing gates separate the narrow gauge line from the standard gauge track and continue the Network Rail boundary fencing. They are left open when a crossing controller is present. The gates open inwards to prevent them blocking the standard gauge line. A replica signal box was constructed for this crossing but has now been installed at Pen y Mount to control the junction with the Welsh Highland Heritage Railway.

The signals at Cae Pawb are colour light signals. They were originally "ladybird" signals similar to home boards but were changed in order to give a clearer indication.

One of the disadvantages of the staff and ticket system is that it is very inflexible. If a locomotive fails in a station, for example, a token staff may be at the wrong end of a section and will have to be moved by road. This situation does not occur under the electric train staff (ETS) system, a more advanced system in which tokens can be obtained at either end of a section from a token instrument.

ETS has been used on the Ffestiniog Railway for many years and the FR Co. were anxious to obtain enough ETS instruments to equip the WHR. After a long search, sufficient ETS equipment to operate the entire railway was obtained in 2008 from the Irish national railway company Iarnród Éireann; the equipment became redundant after the company recently modernised its signalling systems.[5][6] Like that on the FR, the equipment obtained for the WHR is of the Railway Signal Co. miniature type.

As the WHR has no telephone cabling to connect the system, the FR Co. has developed a more modern alternative method of connecting the ETS machines. Until the system is finished, the WHR will continue using its current token system between Porthmadog and Rhyd Ddu. This new system obviates the need for telegraph lines by connecting the machines through the internet; this has led to the term "micro-ETS" being coined.[7]

The 2018 resignalling was designed such that it would be compatible with the future adoption of micro-ETS. Micro-ETS came into use on the 31st July 2021 between Porthmadog and Rhyd Ddu. The rest of the line is expected to follow at a later date. Intermediate machines at Pen y Mount and Hafod y Llyn are not planned at this time.[8] [9]