Evan M. Davies was an engine driver on the Ffestiniog Railway.

He joined the staff at Boston Lodge Works as an apprentice at the age of 15 in December 1959. At that time Evan's mother, Janet, was the crossing keeper at Penrhyn Crossing, assisted during the holidays by daughter Avril. On hot summer days they were rewarded with ice creams thrown from the buffet car door as the train sped through the crossing at 10 mph. Mr Ednyfed Davies (father of Evan and Avril) died in August 1968. He had often assisted his wife Janet in handling the gates. Janet gave up the crossing in 1975 when Avril took over until her mother's death.

Evan spent his entire working life on the FR. He spent most of his career as a driver, working mainly on the double Fairlies. By 1964, Evan was driving regularly and soon became renowned for his skills in driving double Fairlies. On the 26th August 1967, Earl of Merioneth with Evan driving took twelve bogie-coaches and over 400 passengers from Porthmadog to Tan y Bwlch in 40 minutes including three lengthy stops en route to board more passengers. Expertise like that earned Evan popular recognition as 'the double-engine driver'. Always smartly turned out, Evan appeared on TV in 1975 when the BBC 'Nationwide' programme featured Porthmadog Harbour station with Valerie Singleton interviewing the celebrated double-engine driver. In 1987, Evan had a 'bit of an accident' in gale force winds. Having shut the door of the long locomotive shed, the wind blew it back at him and off its hinges. Two days later Evan discovered that the pain in his leg was indeed a fracture. The shed was boarded up pending a Board decision. Nature pre-empted the Board decision and blew part of the roof off, thus confirming the demise of the long shed.

Evan drove the re-opening trains to Tanygrisiau and Blaenau Ffestiniog. In 1986 he accompanied Mounatineer when it visited the Vale of Rheidol. He was rarely seen without a cigarette dangling from his lip. Evan had two spells in overall charge of footplate crews. The first, in the late 1980s, ended when footplate crews became part of the Operating Department. The second spell lasted just a few months in 1991.

Following this, Evan was involved in the overhaul of the Funkey Vale of Ffestiniog and was chosen as driver trainer for the Welsh Highland Railway. In 1996, the FR Co. sent Evan to South Africa to learn how to drive the two Beyer Garratt locomotives that they had bought for service on the Welsh Highland Railway. He already knew the South African staff, Phil Girdlestone (long time FR supporter and Boston Lodge employee until November 1985, and now with the Alfred County Railway in Natal, South Africa) and Shaun Mc Mahon (a former FR fitter). Sadly he suffered a heavy fall whilst in South Africa gaining experience on the Garratts and this seems to have triggered his final illness.

Evan died shortly before his 52nd birthday. For his funeral during Vintage Weekend on 26th October 1996, the railway held a minute's silence at 13:00. The 13:50 departure, headed by Blanche and Mountaineer passed Minffordd Cemetery as Evan was being laid to rest. As a mark of respect, the train slowed to walking pace, the footplate crew removed their caps and a long salute was sounded on Blanche's whistle.

Evan was married to Anne Davies, and had two stepdaughters, Sheena and Judith.[1][2] 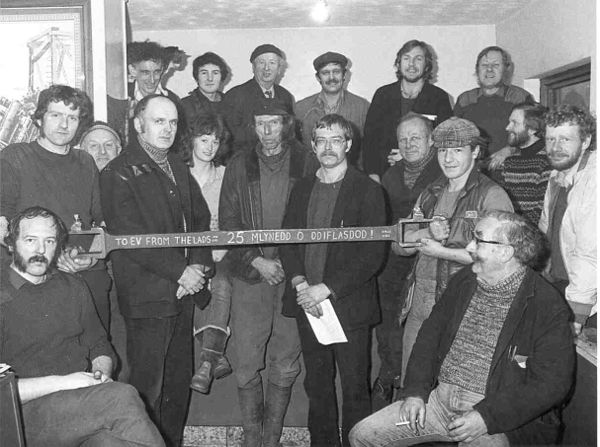