From Festipedia, hosted by the FR Heritage Group
(Redirected from Trident Signal)
Jump to navigation Jump to search

Trident Signal is a name used on the FR to refer to a number of signals of a distinctive three-armed variety. The three arms of the signals show which of three possible routes is set on the line ahead. There have been a number of these signals on the FR at various points in its history. 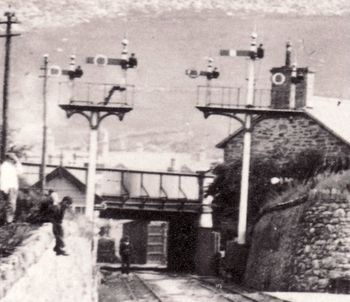 The signals on the approach to Duffws in 1887. Inspection of this trident signal and comparison with other pictures in this article will explain why the Duffws signal is no longer thought to be the signal re-erected on the Cob in 1929. Photo: Detail from Bleasdale via Spooner Album. FR Archives.

There was a McKenzie & Holland trident signal which controlled the approach to the FR Duffws Station being sited to the South of the FR main line just below Queen's Bridge (which carried Church Road over the line) in Blaenau Ffestiniog. The signals were removed from Duffws in 1923 but the Trident itself was not apparently removed until 1929. There was an appreciable period when the signal arms had been removed at Duffws, but the posts remained.

Although there is a dearth of photographic evidence, the signalling plans of the 1899 Dinas Deviation signal box at Glan y Pwll indicate that there was another trident situated near the Barlwyd Bridge.

A trident signal was erected on the Cob in 1929 to act as the home signal for Harbour Station.

According to Boyd the Duffws trident was moved to the Cob. However design work for the new (2014) Trident signal at Porthmadog raised some interesting questions and suggests the Trident erected there in 1929 may have come from Glan y Pwll.[1]

McKenzie & Holland provided several styles of signal/signalpost, most notably the 'heavy' and 'light' varieties. The signals at Duffws with their ornate bracketry underneath the signal staging were of the 'heavy' design. The Trident signal erected on the Cob in about 1929 is of the simpler 'light' design. There is a letter contained within the GAMS file XD97/21780 dated 19/3/1929 and received at Portmadoc on the 21st: there is a footnote in the letter from Stephens to Evans reading 'Also please get points and signals connected up on Portmadoc 3-Arm signal'. GAMS File XD97/19485 contains correspondence between Tyrwhitt and G Lewis Griffith during the latter part of August 1923 [2]. Griffith confirms that the disconnection of all signals at No 1 box (Duffws Station) was complete w.e.f 27th August 1923; suggesting further that the Cob Trident came from Glan y Pwll. This signal controlled the approach to Harbour Station and the WHR junction.

Continued use after the revival[edit source] 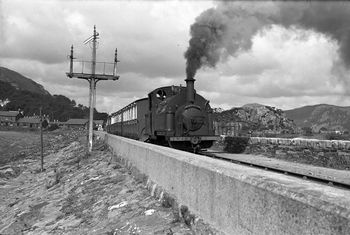 In the early years of the FR revival the Cob Trident signal was adapted to indicate if the points were set for the platform road and featured in many photographs of that era's trains on the approach to Harbour Station until it was blown down in a storm on 15th February 1967.[3] 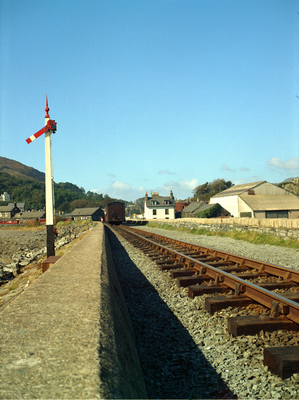 Its first replacement in 1967 was a composite job embracing the post from one the two old W.H.R. signals near Portmadoc goods shed and the roadside wall on the Cob,[4] rodding and other fittings from the trident, an arm from an old Liverpool Overhead Railway signal and a finial believed to be from an FR post at Blaenau. It had improved interlocking to ensure the signal could only be pulled off when the road was set right through to the platform.[5]

It in turn was later replaced with signals of the GNR somersault type in 1971 ("sourced", by Allan Garraway from Holloway and also manufactured by McKenzie & Holland). (See Signals controlling section entry)

In early 2014, as part of the rebuilding of Harbour Station, a new trident signal, was erected to control the approach to the revised station layout. In June 2014 it was complete except for its finials and had yet to be commissioned. In the interim, a temporary colour-light signal was installed, the post of which had been previously used in the ill-fated signalling system at Blaenau Ffestiniog. The new signal was based on the original but located further out on the Cob. In addition to the three main arms there is a subsidiary arm mounted on the main post. The three arms (from left to right) indicate that the road is set for the yard, FR platform or WHR platform. The subsidiary arm is a type of shunt signal.

Most semaphore signal arms have two spectacle glasses, that the light shines through, so that the signal shows red or green at night. The semaphore arms on the old trident signal, however, were of a much older design that only had a single red spectacle glass. When the signal arm was "on" (stop) the white light shone through the red glass to show a red light, when the arm was "off" (proceed) the spectacle moved clear of the light to show a white light. The new trident signal was designed to replicate the same type of single-spectacle arm. However, white signal aspects are nowadays only used for shunting signals. The lights on the new trident signal's main arms therefore switch between a red light when the arm is "on", and a green light when the arm is "off". In the illustration below right, you can see the green light showing on the arm that is "off", while the other arms are showing red lights through the red spectacle glasses.