Carriage 14, also known as The Snapper Bar is a buffet car operating on the Ffestiniog Railway. It was originally built in 1897 as a non-corridor brake third for the Lynton and Barnstaple Railway. After the closure of that line it was sold for private use and was later bought by the FR in 1959. By 1963, the carriage was rebuilt as a corridor buffet car, becoming the largest carriage on the FR. In this form it provided the template for the FR's new carriages then being built. 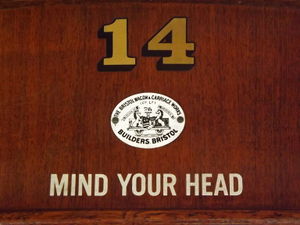 What was to become Ffestinog Railway Carriage 14 was built in 1897 by the The Bristol Wagon and Carriage Works Company Ltd for the Lynton & Barnstaple Railway in Devon. It was originally a passenger brake vehicle with 3rd class accommodation and carried the number 15. It later became a brake-composite. Six months after the grouping on 1st January 1923 the L&B became part of the Southern Railway and the coach was renumbered 6993. The Lynton & Barnstaple was closed in 1935 and the coach survived in private use near Snapper Halt, at first housing evacuees and later chickens.

Of the 15 other coaches built for the L&B by BWCW, No 2 (composite brake with observation saloon) survived in private ownership and is at the National Railway Museum at York in an unrestored state. The centre section of an unidentified third class observation coach was used in a reconstruction of No 7 by one of the L&B area Support Groups, and returned to Woody Bay in 2004, and by 2013 had been fully refurbished and put into service on the revived L&B, as have coaches 5, 11, 16 and 17 (the latter built by Shapland and Petter in 1910/11), using new underframes made at Boston Lodge. Parts of several other coaches have also survived. 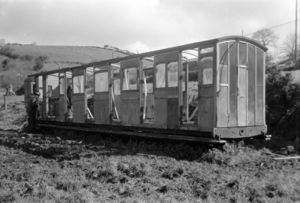 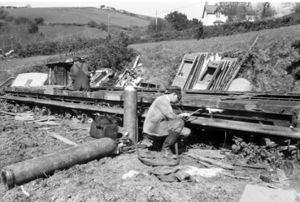 In 1959 No 6993 was purchased for the Festiniog Railway and taken to Boston Lodge for restoration. The rescue of the coach from Devon in 1959 became known as Operation Snapper. Completely rebuilt as a Buffet Car and given the number 14, the coach entered service in 1963.

In the rebuild the frames were altered to sit 1 1/4" lower on the bogies, and the bodysides were reduced by 6 1/2" at the bottom. This reduced the height at the eaves, and in partial compensation the roof profile was made more sharply curved. The length and width were not significantly altered except that the guard's lookouts were removed (and donated to the Narrow Gauge Railway Museum at Tywyn). These alterations were necessary to fit the loading gauge but No. 14 was still larger than any previous FR carriages, as by then the major restrictions (Old Moelwyn Tunnel and Rhiw Plas Bridge before its rebuild) had been removed. Seats from Sheffield trams (then recently withdrawn) were fitted, and 'Ellbee' patent louvre windows were fitted in place of droplights in six positions. An ex-BR carriage dynamo, batteries from London trolleybuses and couplers from Welshpool & Llanfair Railway wagons were used. The carriage went into service at Easter 1963 on its original bogies, with additional dampers fitted, and was said at the time to ride superlatively.[1]

The Snapper Bar name was applied during the 1960s until the period from 1977 when Buffet Cars were named after notables in FR history, when Carriage 14 was named William Madocks. The Snapper Bar name has now been revived and is carried in small letters on the toplights, visible from inside and outside.

In 1993 it was reported that following the building of Carriage 114 it was out of use and all options were considered including conversion to a bar car.

In a more recent refurbishment the lookout duckets have been restored (in a shallower form) and the panelling, door and window arrangements at the former Guard's end altered to be more like the original form of the vehicle. The louvre windows were replaced by droplights of the original style. The current paint scheme is also more sympathetic to its period details. Carriage 14 no longer has a hand brake. One was fitted until the original bogies were re-fitted, when the differing brake rigging arrangement precluded its operation.

Carriage 14 was taken into Boston Lodge over the winter of 2009/2010 for a much needed re-varnishing. During September 2010 Carriage 14 returned to the Lynton & Barnstaple railway when it (and Carriage 102) accompanied the newly built Lyd to that year's gala at Woody Bay.

After the introduction of the new service car Carriage 125 in 2016, the buffet facilities are no longer required in normal service. This allowed the carriage to be taken out of service for some attention in the carriage works. The old gas heating equipment was removed and replaced with a diesel fired heater and hot water unit, housed in the old gas cupboard. The top of the cupboard was converted into additional work top space for buffet use. The interior was tidied up, the seats reupholstered and the exterior repainted. Work was also carried out on the electrics. Following its reintroduction to service it has seen some use as a buffet car on special trains.

Following No 14's successful introduction, the new carriages (Centenary Stock, 10x-series) built subsequently had their design based on the dimensions of No. 14. They became known as "Barns" after No. 14's origins (the Lynton and Barnstaple Railway) though some dispute this derivation. It is said that someone entering No 24 for the first time was heard to say "It's like a barn inside" in reference to its spacious interior.

In 1967, it was proposed to renumber 14 as Carriage 102, but this was not carried out. This would have put it the same series as the new carriages based upon it. However it was decided that, due to its history, it should remain numbered among the original FR carriages, being contemporary with Carriages 21 and 22.