For the current Superbarn of the same number, see Carriage 103.

Carriage 103 was a buffet saloon from the Centenary stock series. 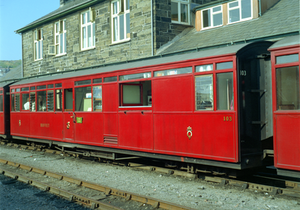 This picture shows 103 in September 1972 with the large serving hatch from which passengers on the platform at Dduallt were served. Photo: A Stirling via iBase Festiniog

In 1964 the Festiniog Railway began construction of a series of modern wooden bodied coaches at Boston Lodge. The profile was based on that of the restored former Lynton and Barnstaple Carriage 14. As a result these coaches are known on the railway as "The Barns". Carriage 103 was the FR's first purpose built buffet car - Carriage 14 and 12 (Van 5) having been converted from carriages which were not originally buffet cars. 103 entered service on 21st July 1968 in time for the three train service in its first season of operation to Dduallt.

During the period of operation when the line terminated at Dduallt a hatch in the carriage side opened to enable passengers on the platform to be served with refreshments.

In the years when the buffet cars were named, this vehicle carried the name Charles Spooner. The name was applied in 1977.[1]

Withdrawal as a Buffet Car 2006[edit]

Buffet Car 103 was withdrawn on the 3rd of November 2006, having made its last run the previous day, bringing to an end 38 years of service during which time it covered over 534,000 miles. The bogies were recovered for use under the new carriage 100.

On 7 November 2006, the Control Office published the following statistics about 103 as a Buffet Car. 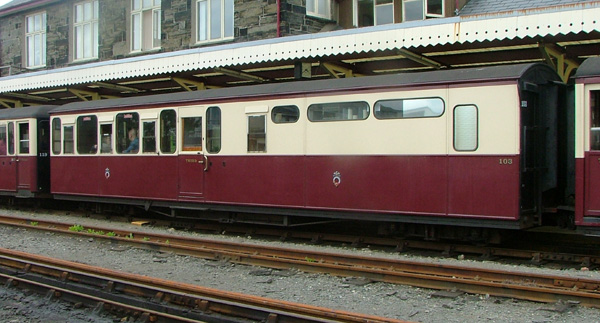 A new carriage, re-using the number, was being built in early 2009 as an "All 3rd" barn. It contains no major components from the original. Details of the new carriage can be found here.

The underframe from the old 103 still exists and can often be seen in use as runner wagon at Boston Lodge. It was thought that the frame might be reused, however experience has shown that it is easier to weld up new bespoke frames than to modify the old ones for use under the more modern carriage designs now being built.