Carriage 21 is a third class bogie vehicle built for the Ffestiniog Railway. It is a replica of an original pair of carriages from 1897 neither of which survives in original form. Construction began in 2013, finished in 2019 and has largely been carried out by volunteers from "Team X".

The original carriages 21 and 22 were built by the Ashbury Carriage and Iron Company in 1897. They were a pair of "tourist" carriages. Carriage 21 was scrapped in 1962 whilst Carriage 22 survives but completely rebuilt such that it bears no resemblance to the original appearance and no original material remains.

In the 1994 renumbering scheme, number 21 was reserved for a replica of the original carriage 21. 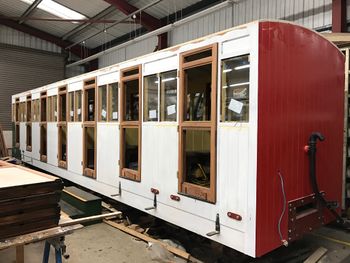 In August 2013 the steel work for a new set of frames for a replica of 21 was in road 4 in Boston Lodge.

By late 2014 good progress had been made in construction of the bodywork. By Spring 2017 the doors were starting to be installed, windows were in place and some painting had started. By May the roof and doors had been fitted.

When complete it will carry the early preservation livery of green with ivory upper panels and red ends. Although the original 21 never carried this livery it will allow the new carriage to represent 22 in the 1960s set.

The picture to the left shows the carriage sitting on South African bogies, but new ones will be fabricated for operational use.[1] The new bogies will be to the original design.[2] In June 2018 the completed body (still on accommodation bogies) made its way to the paintshop. Painting was complete by the end of August at which point the body work was stored awaiting completion of the running gear.[3] May 2019 saw Carriage 21 on its new bogies and out for a test run before it was taken back into the works for the finishing touches to be applied.[4]

Carriage 21 entered passenger service on the 22nd September 2019 with a special train for those who built and funded it.[5]