Carriage 4 is one of the Ffestiniog Railway's original carriages from 1864.

Carriage 4 was built by Brown, Marshall & Co of Adderley Park Birmingham. It is a single compartment closed carriage with knifeboard seating and a third class of capacity seven each side. It is believed to have been part of the first batch of narrow gauge passenger coaches built in the world for public service (along with Nos. 2, 3, 5 and 11), to designs assumed to have been made by C.E. Spooner.

There is a possibility that carriage 4 may originally have been a second class vehicle.

At some point this carriage had the panelling on the sides replaced with vertical matchboarding.[1]

Restoration and rebuilding in the revival era[edit]

It was initially restored to traffic in August 1958,[2] initially in green livery. It later had the panelling restored when it carried the standard green and ivory livery. It carried Cherry Red livery from end of the sixties. Another refurbishment saw its recent return to service.

The carriage has now been painted in the Colonel Stephens livery of green with red ends, for use in The 1930's Train. 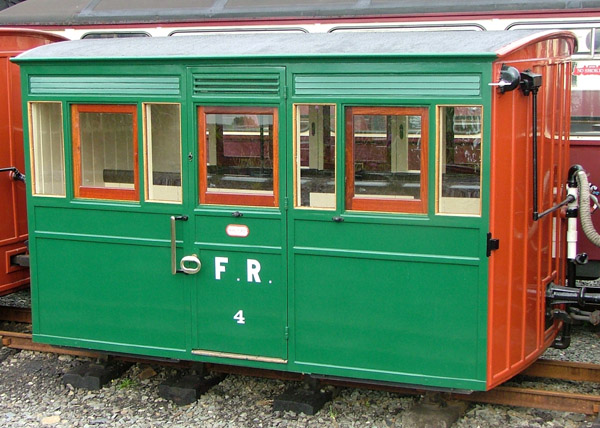